Tencent Music Q1 preview: Where next for TME stock?

Tencent Music is scheduled to release first quarter earnings after US markets close on Monday May 16.

Tencent Music operates leading music and audio entertainment platforms in China including QQ Music, Kugou Music, Kuwo Music and WeSing, but has a larger social element built around likes, follows and sharing that is driven by a slew of other features from live streaming to video and karaoke services.

The company is expected to see overall Monthly Active Users using its online music services continue to fall in the quarter amid tougher competition for free services from other platforms, but the number of them paying for subscriptions continues to grow and is expected to hit 80 million in the first quarter and this is what Tencent Music is focused on.

Meanwhile, things remain much tougher for the social entertainment side of the business, where overall MAUs and paying users are forecast to continue falling. This too is down to more intense competition.

User numbers will be the main focus for investors this week as fears have grown over the future of streaming services as some major platforms, spanning Netflix to Facebook, have suffered their first loss of subscribers in 2022 and others that have managed to keep growing their user base have done so at a slower rate than what investors have become accustomed to in recent years.

The situation is slightly different in China to the west considering Covid-19 is still causing chaos in the country amid its zero-tolerance approach to the virus. Lockdowns have boosted online entertainment stocks in the past but, overall, it is likely to cause a volatile and disruptive picture for Tencent Music and others. Plus, the regulatory overhaul that has plagued internet stocks in China in recent years has also impacted user growth.

Although the vast majority of Tencent Music’s MAUs are using its music service, the social entertainment business is the key driver of revenue for the company, which is why there are concerns over the current user trends. Tencent Music owns the three most popular music streaming apps in China, but it doesn’t boast the same presence in the social media space where it faces fierce competition from an array of rivals including the likes of TikTok and Sina Weibo.

Tencent Music has been expanding its sales channels and investing in high quality content to encourage more people to switch to its premium music service. This includes bringing in more indie artists to the platform, acting as a ‘hotbed’ for hit songs used in marketing activities and by producing its own original content. It has also been investing in long-form audio such as podcasts and continues to host more live performances by artists to become a central hub for China’s music industry.

Meanwhile, it said it is ‘working to increase our competitiveness’ in the social entertainment space ‘through ongoing product innovations and by building additional verticals in social entertainment such as audio live streaming, international expansion, and virtual interactive product offerings’.

We could hear more in the update about Tencent Music’s plans in the metaverse after announcing it would ‘try out a lot of things’ in this fast-evolving space that aims to merge offline and online worlds. It said it is working on a metaverse music app that could be launched before the end of 2022, which could add a new potential catalyst for the company going forward.

Wall Street believes revenue will decline for a second consecutive quarter and drop over 14% year-on-year to RMB6.7 billion. The company is expected to report a 19% jump in subscription revenue to $2.02 billion, but this is not expected to be enough to counter a 1.5% drop in sales of music services and a considerably steep drop from its social entertainment services.

Profitability is also being squeezed as its gross margin continues to contract. Analysts believe this will tighten to 27.5% in the first quarter compared to 28.8% in the previous quarter and 31.5% a year earlier. This squeeze is being caused by a lower overall proportion of social entertainment users paying for its services and because a larger proportion of total revenue is coming from its music services, which boast a lower margin.

Overall, the decline in revenue and weaker profitability is expected to see net profit plunge over 34% year-on-year to $642.8 million in the first quarter.

Notably, Tencent Music said in March that it is planning to pursue a secondary listing in Hong Kong through a direct listing. It won’t offer any new shares as part of the listing and said this will ‘provide our shareholders with greater liquidity and protection amid an evolving regulatory environment’.

The stock has lost over 87% in value since it peaked at fresh all-time highs just over a year ago and today trades at $3.89.

Shares have drifted lower since rebounding from the all-time low of $2.95 last month, and this should be treated as the floor for the stock. The RSI sunk into oversold territory and attracted buyers back into the market when this low was hit, reinforcing the view it can hold to avoid opening the door to unknown territory and new fresh lows.

Notably, the 21 brokers that cover the stock believe there is greater upside potential with an average target price of $6.88, some 77% above the current share price and back at levels seen last January. 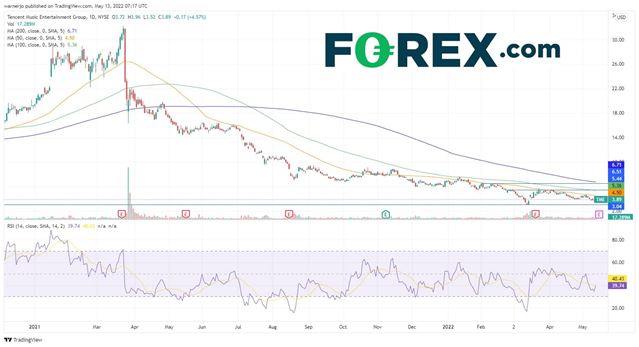