Reflecting investor worries over China, the world’s second largest economy, we have seen the yuan fall over 1.3% today to a fresh 14-year low against the dollar. Meanwhile the local stock markets have dropped even more in percentage terms, with the FTSE China A50 Index falling nearly 4% overnight, while Hong Kong’s Hang Seng plunged by more than 6%, its biggest drop since the 2008 global financial crisis.

China is struggling to restore confidence among investors. Xi Jinping, China’s president, secured a third term in office and stacked the country’s highest decision-making body with loyalists. This follows the conclusion of China's 20th National Party Congress, where leaders who will set the country's economic and political policies for the next five years were announced.

Xi’s zero-covid policy is what has hurt the economy so dearly in recent times. While the rest of the world have moved on or learned to live with the virus, China is continuing to take no chances. Investors are worried that as a result of further, inevitable, flare ups of the virus, more lockdowns will be announced, causing even more pain for the people and economy.

Investors are also worried that because of Xi’s loyalists being concentrated at the top of the decision-making body, there is the potential for more policy mistakes that could cause severe damage to the future path of growth. Xi will have a lot more say in how future policies will shape.

Meanwhile, the US Federal Reserve is continuing to press ahead with its aggressive policy tightening and this is keeping the dollar supported on the dips. As a result, the USD/CNH remains fundamentally supported until something changes.

Given the fresh breakout above the September peak of 7.267, the path of least resistance will remain to the upside for now until and unless price goes back well below this level and hold there on a daily closing basis. 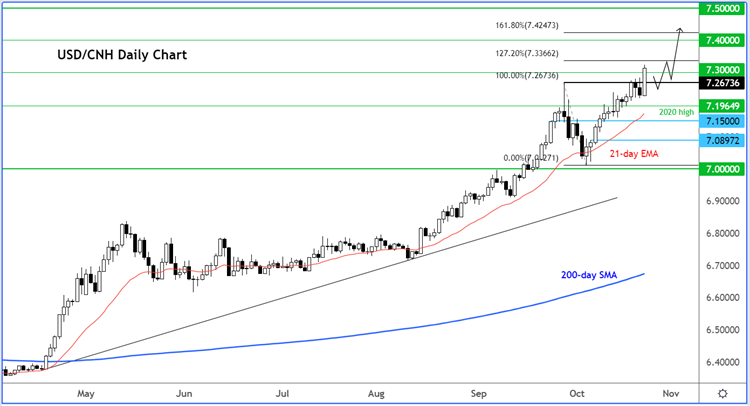