Netflix (NFLX) earnings preview: Can the stock cope with the loss of “The Office”?

We’ve now seen the Q4 results from most of the major US banks, but the main event for traders will always be the fast-growing FANMAG (Facebook, Apple, Netflix, Microsoft, Amazon, Google/Alphabet) group of technology stocks. Most of these companies don’t report earnings for another week or longer, but tomorrow’s release of Netflix’s (NFLX) Q4 earnings will certainly serve as an interesting first course.

Getting the top line numbers out of the way, analysts are expecting the company to report $1.35 in earnings per share, which would represent year-over-year growth of just 3.8%. Revenue growth is expected to be roughly 21% stronger than the same quarter last year at $6.62B. Both of these growth rates would be the lowest in over a year as the earlier tidal wave of new subscribers stuck at home during the pandemic slows to a trickle.

In terms of key storylines, there are two critical, interlinked themes to watch from Tuesday’s release. First, Netflix’s exclusive contract to stream “The Office,” a wildly-popular sitcom about a nondescript Pennsylvania paper company, expired on January 1st. While it’s just one show, a recent Nielsen report found “The Office” was by far the most streamed series on the planet last year, with more than 57 billion minutes watched: 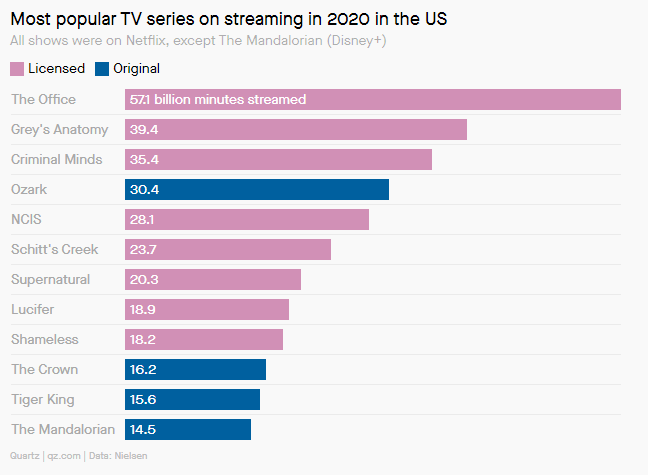 More to the point, the departure of “The Office” is an example of the broader streaming content war heating up. With competitors like Disney+, Paramount+, Discovery+, Apple TV+, and HBO Max (which poached another popular sitcom, “Friends” from Netflix last year) all aggressively producing and bidding on popular shows and movies, the increasing strain on consumers pocketbooks could prompt them to cancel some services. Underscoring this point, a recent survey found that 32% of respondents were “likely” or “very likely” to cancel their Netflix subscriptions in the next three months, far higher than previous surveys. For its part, Netflix will try to woo viewers back with new shows like Equinox, Pretty Little Things, Bridgerton, Dare Me, Sweet Home and Heroes.

Though traders will key in on backward-looking metrics like the financial results and subscriber growth, traders will closely scrutinize the companies outlook for 2021 and beyond for signs that these two related developments are limiting NFLX’s future growth prospects.

After being one of the stock market’s biggest winners through Q2 of 2020, NFLX has spent the last six months treading water around the $500 level. The stock has been constrained to a roughly $100 range between $460 and $560 since the start of July, and with prices holding near the middle of that range with no obvious momentum, the short-term technical bias is clearly neutral. 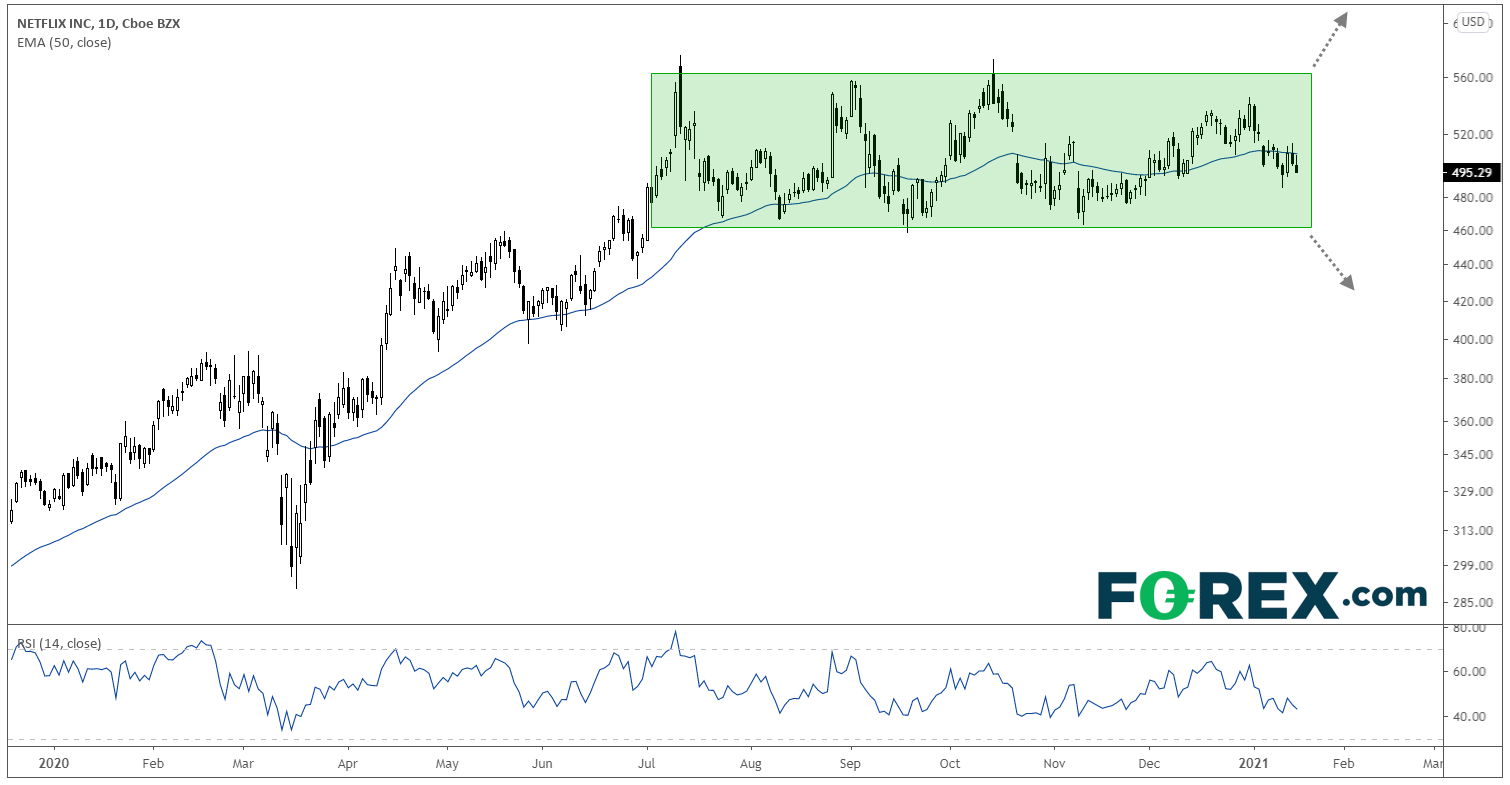 That said, NFLX remains a highly-traded, fast-growing stock, so it’s unlikely to remain stationary for much longer. Tuesday’s earnings report, if clearly stronger or weaker than expected, could be just the sort of catalyst that prompts the stock to break out of its sideways range, potentially clearing the way for a $100+ continuation in either direction.

Many people make it a habit to fall asleep while watching Netflix, but traders shouldn’t be sleeping on the stock, despite the lack of a clear trend over the last six months!