Oil & gas: Do past presidents provide precedent?
As arguably the planet’s most important commodity, the price of oil has downstream impacts for everything from interest rates to equity prices to currency exchange rates. As we approach November 3rd, traders are naturally wondering: How will the 2020 US Presidential Election impact oil and gas prices?

(1) Generally, a president's ability to impact prices is relatively limited.
Broadly speaking, the oil market is global in nature, and therefore, the policies of a single country’s leader (even a country as important for the global economy as the United States) have a limited impact on the planet’s aggregate supply and demand dynamics, despite occasional claims to the contrary.

To take a trite example, no one would accuse former President George W. Bush of being particularly hostile to the oil industry, yet gasoline prices nearly tripled under his watch from a low of $1.45/gallon in early 2001 to $4.05/gallon by June 2008. More commonly, broader economic forces (e.g. the Great Financial Crisis that hit shortly thereafter and drove gas prices back below $2.00/gallon or the COVID-19 Pandemic during President Trump’s first term) are the primary drivers for oil and gas prices.

That said, in some instances domestic and international policies can nudge prices in one direction or another over a period of time, especially when it comes to refined petroleum products such as gasoline. As the chart below shows, the price of gasoline has fluctuated under the last three presidents, with no clear relationship based on party affiliation: 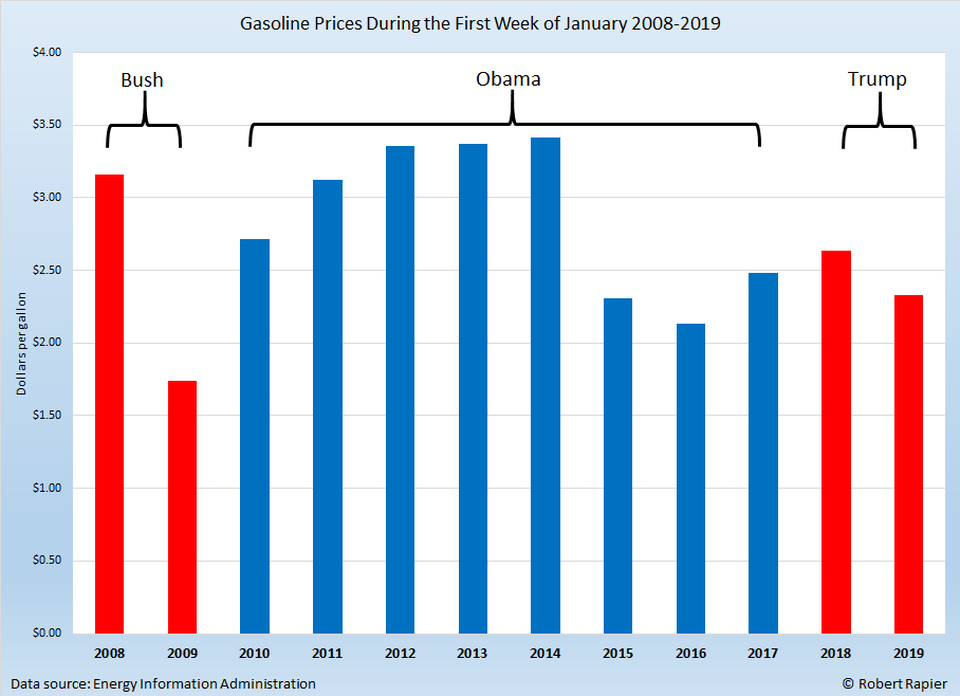 Looking at the above graph, some would argue that the drop under President Trump heading into 2019 was driven at least partially by President Trump’s aggressive deregulation of energy companies. Similarly, Trump’s international policies encouraging both Saudi Arabia and Iran to export oil over this timeframe may have played a role in temporarily increasing global supply.

Of course, the proverbial “elephant in the room” is the ongoing COVID-19 pandemic, which has decimated global demand for oil. Pending any vaccine breakthroughs, the path of the pandemic (and by extension, demand for gasoline and other petroleum products) will at least partially depend on the federal virus containment efforts. As the chart below shows, demand for gasoline in the United States has nearly recovered to its 2019 average of 10M barrels per day: 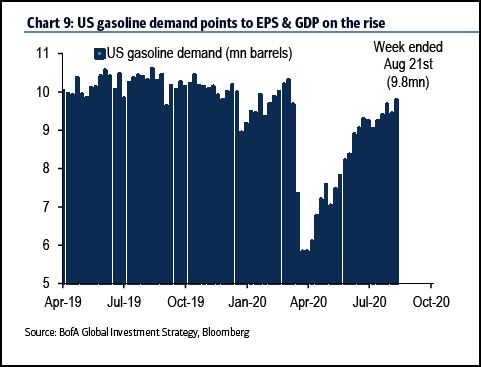 (3) Economists vs. everyday citizens: who's side are you on?

When it comes to a President’s perceived influence on oil and gas prices, professional economists and everyday American citizens disagree. For example, according to a recent study quoted by the New York Times, not a single one of 41 economists surveyed agreed with the following statement: "Changes in U.S. gasoline prices over the past 10 years have predominantly been due to market factors rather than U.S. federal economic or energy policies." These economists (correctly in our view) assert that the global supply and demand dynamics are far more important.

In contrast, many Americans believe that the President can control, or at least heavily influence, oil and gas prices. This belief is representative of a more general tendency to attribute too much credit when things go well and too much blame when things go poorly to the current President.

As we’ve noted before, the biggest risk for readers is to let politics become too big of a factor in their trading, rather than following a well-developed, objective strategy including proper risk management principles. For help developing your own effective trading strategy for the 2020 Presidential election and beyond, reach out to one of our client support representatives today!

* Please note oil products may not be available to trade in all regions.

Oil hovers around 2023 highs ahead of a busy week
By:
Fiona Cincotta

Recession concerns and a stronger US dollar send WTI back below $80
By:
Matt Simpson