With the German ZEW economic sentiment coming out significantly lower than expected on Tuesday (6.4 vs 12.1 expected), and the US dollar continuing to surge based on renewed expectations of a near-term Fed rate hike, the EUR/USD has not had much reason to rise as of late. Economic stagnation in the euro area continues to weigh on an already-dovish European Central Bank that has been in persistent easing mode, dragging down the euro currency. Meanwhile, the US dollar has been given a substantial boost by recent hawkish talk from the Federal Reserve, hinting at the likelihood of a Fed rate hike within the next few months. Additionally, the dollar has been helped by a string of positive economic data releases including, most recently, Tuesday’s better-than-expected number for new home sales in April (annualized 619K vs 521K expected, with a higher revision for the previous month to 531K).

As a result of these forces combining to pressure EUR/USD lately, the currency pair has been in a sharp decline since it hit a new 8-month high at 1.1615 in early May. That high was established with a conspicuous "shooting star" reversal candle at the underside of a key uptrend line, indicating a clear bearish turning signal. Since that candle pattern formed, EUR/USD has spent the past three weeks falling precipitously, breaking down below both its 50-day moving average and a parallel trend channel that has roughly defined the recent uptrend since the December low near 1.0500.

Currently, the currency pair has dropped down to establish a new 2-month low and appears poised to reverse even more of the gains made during the noted uptrend that began in December. In the process, EUR/USD has come close to approaching both a major support level at 1.1100 and its 200-day moving average slightly below that level. Any strong breakdown below this support could likely open the way for more losses and an extension of the slide since early May. In this event, the next major downside target continues to reside at the key 1.0800 support level. 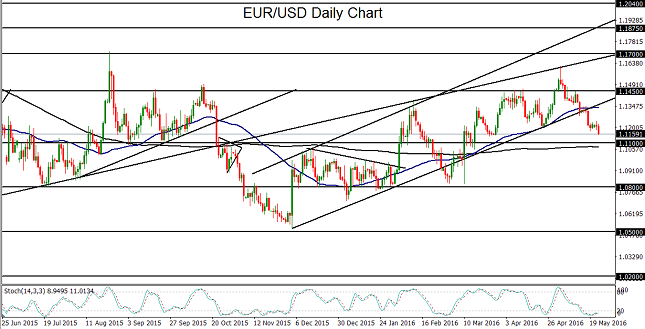