The US dollar has depreciated over the past few months, even against the euro which has refused to head down despite the ECB’s efforts. Market participants have been forced to repeatedly push out their expectations about the next Federal Reserve rate increase, due mainly to the soft patch in US data of late. But last week, the EUR/USD exchange rate actually fell despite the release of more disappointing macro numbers from the US. One explanation for this could be concerns over Brexit – or the prospects of Britain leaving the EU – which may be keeping the bulls at bay. Undeniably, Brexit, should it happen, could just be as bad for the Eurozone economy as it would for the UK. It could set a precedent, potentially encouraging other counties to leave the EU in the future. Another reason behind the EUR/USD’s sell-off last week could be this: profit-taking ahead of this week’s key Eurozone data and the ECB’s policy meeting on Thursday. Nothing significant is likely to be announced at this particular meeting since it was only last month that the ECB expanded its QE package. But Mario Draghi could nevertheless jawbone the currency lower at his press conference. Consequently, we could see some much-needed volatility in the EUR/USD this week. Even if trades side-ways, it should still provide plenty of short-term trading opportunities for both the bulls and the bears alike.

The following are among the potential market-moving events to watch out for this week:

Last week, the EUR/USD could not break through the 1.1450-1.1500 barrier and after several failed attempts there traders decided to sell the unit. As a result, it fell through short-term support at 1.1330 and formed a bearish engulfing candle on its weekly chart. At the start of this week, the EUR/USD has managed to hold its own pretty well thus far. However, at the time of this writing, it was testing the broken 1.1330 support level, which may well turn into resistance and precede another drop. If the low of 1.1235 from last week also breaks down, the EUR/USD could then drop towards the next potential support levels at 1.1155 or 1.1065 – the latter being the meeting point of the 55-week moving average with the 61.8% Fibonacci retracement against the most recent double bottom low.

But with the 55-week SMA flattening and the EUR/USD making higher lows within its large consolidation range, the underlying long-term trend may be turning bullish. But last week’s bearish engulfing candle suggests we may see lower levels first before a possible rally. In any event, a potential breakout above key resistance in the 1.1450-1.1500 zone would be a bullish outcome, which could lead to a significant rally. 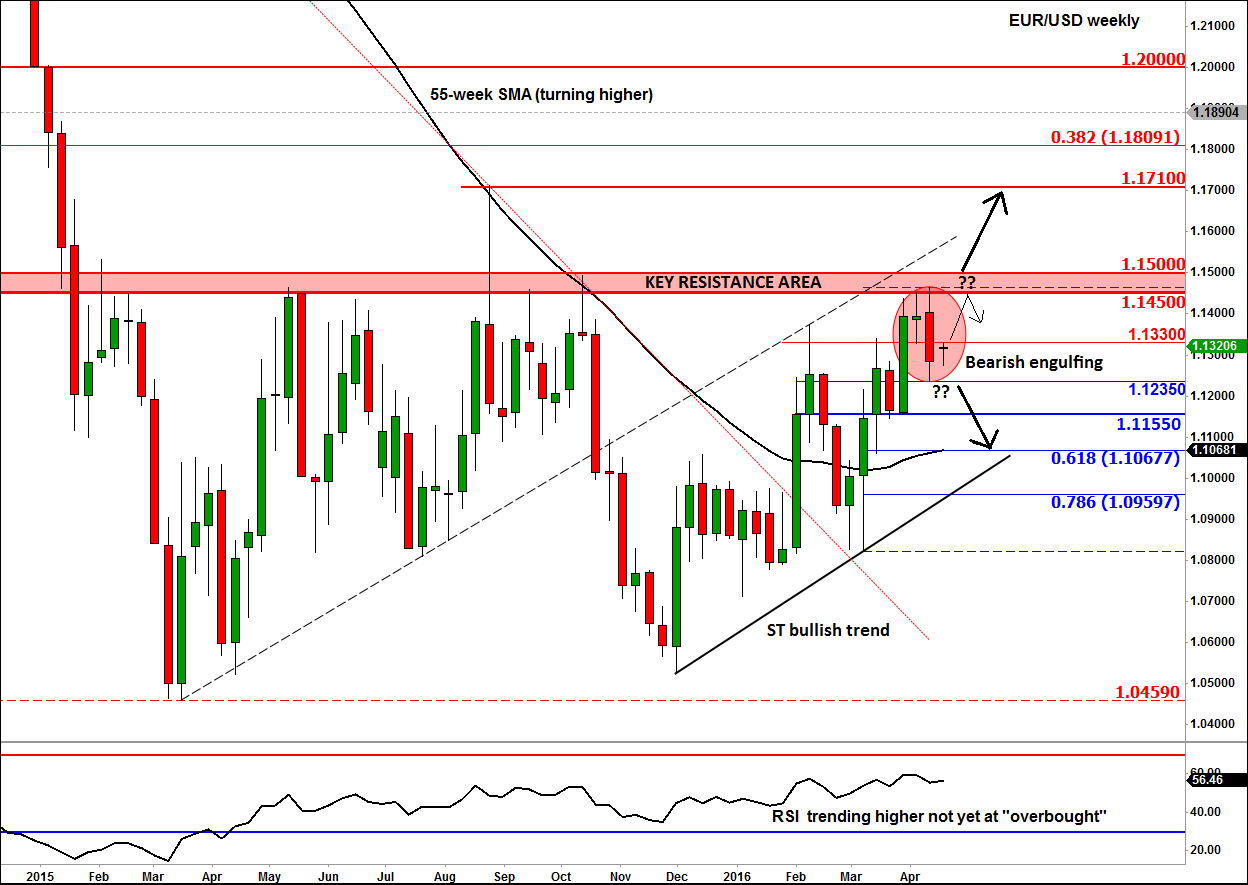