The troubles for the Eurozone continue, putting the stock market recovery at risk. We had another very poor ZEW survey reading from Germany this morning, as investors fear that additional energy costs for households and businesses will weaken an already struggling economy in the months ahead.

So far, however, stock market bears have resisted the temptation to come out in force and derail the recovery that started in June. This is partly because of: (1) expectations that the ECB’s hiking will end quicker than previously expected; (2) the ongoing weakness in the euro, which is making Eurozone exports attractive to foreigners; (3) a better-than-expected earnings season. (4) downside risks at least partially priced in, and (5) the big correction in oil prices.

Still, it is progressively becoming difficult for investors to justify maintaining an optimistic view on the stock markets given a challenging macro outlook and not just in the Eurozone. A poor Empire Fed Manufacturing Index print and weak Chinese industrial and retail sales data yesterday remind us that it is not just Eurozone that is struggling for growth.

Today’s ZEW survey shows that investors grew even more pessimistic about the Eurozone’s largest economy in August. The German ZEW survey’s Current Conditions index printed -47.6 which was roughly in line with expectation as it deteriorated from the -45.8 reading in July. But the Economic Sentiment index disappointed expectations with a print of -55.3 compared to -53.8 last month. According to ZEW, surveyed investors and analysts expect a further decline in economic growth as high inflation rates and additional costs from energy prices will decrease profit expectations for the private sector.

Energy prices are soaring in Europe. Reduced Russian energy shipments of around only 20% of capacity through the Nord Stream 1 pipeline have increased the risk of rationing in the coming months. However, Germany’s gas storage facilities have reached a fill level of 75%, some two weeks ahead of schedule.  The government’s aim is to raise this to 85% by the start of October and 95% by November. So, rationing might be averted after all.

Against this backdrop, I wouldn’t be surprised if the stock market rally derails. But the bears must see a confirmed bearish reversal signal first before even entertaining the idea of shorting the likes of the DAX. Indeed, the current short-term trend is bullish given the higher highs and higher lows. The DAX is climbing inside a rising wedge, as it enters the previous resistance zone around 13900 to around 14100. If not already long, the bulls need to proceed with extra care here. 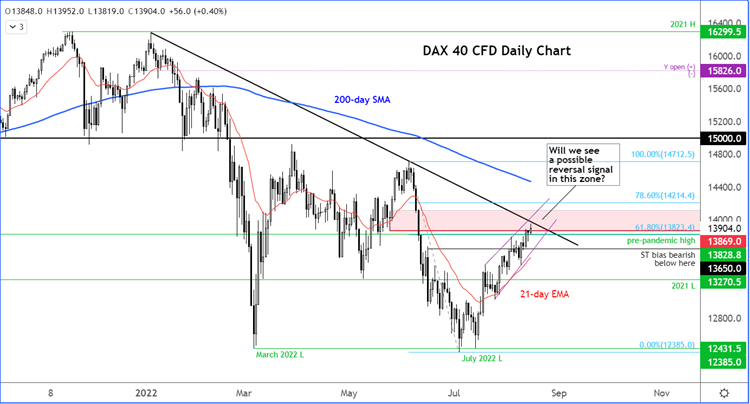