EUR/USD rooted in bear channel ahead of NFP

The EUR/USD will be in sharp focus today with the release of the US non-farm jobs report. Amid growing fears about a looming recession in the Eurozone, the popular currency pair slumped in the last two days to give back the entire sharp gains made earlier in the week. The focus is now going to be on the dollar, with the thesis of a Fed pivot being put to the test. So far, Fed speakers have dismissed those talks, and if today’s jobs report is decent enough then we may well see the greenback rise further against the single currency.

In case you missed it, HERE is our NFP Preview article.

But before we talk about the jobs report and the Fed, let’s not forget that there is a more pressing issues for investors in the Eurozone…

Recession fears intensified this week as investors were presented with even more disappointing data while they saw oil prices rise further on the back of OPEC’s decision to cut output aggressively.

Assessing the poor data and the impact of the renewed rise in oil prices on inflation, investors have sold European stocks and euro in favour of the US dollar in the last two session.

You wouldn’t blame them, would you? Evidence of a looming recession in the euro area is growing day by day.

All the above figures are consistent with other signs that point to weakness in demand, and underline expectations of a looming recession in the coming quarters. The energy price shock created by the Russian invasion of Ukraine continues to be the main driver behind the economic slump in the Euro area.

There has been some speculation that the Fed is going to pivot and start easing its aggressive rate increases, following the footsteps of a couple of other central banks like the RBA. But bets that the era of central bank hawkishness has peaked is a dangerous game and hasn’t worked very well this year. We have repeatedly seen inflation data exceeding expectations and the Fed has correspondingly responded by being even more hawkish with its rate increases and language. The labour market has remained very hot until now but following some weakness in pre-NFP data earlier this week, some investors are expecting the monthly non-farm employment report to potentially disappoint expectations this time. But will the Fed be too concerned about one month’s worth of jobs data, anyway?

Following some speculation about the Fed potentially pivoting, we saw officials one after another come out and dismiss that idea. Will their tone change if today’s US jobs report turns out to be really poor? I have my doubts, as the Fed likes to see a trend in the data before reacting. 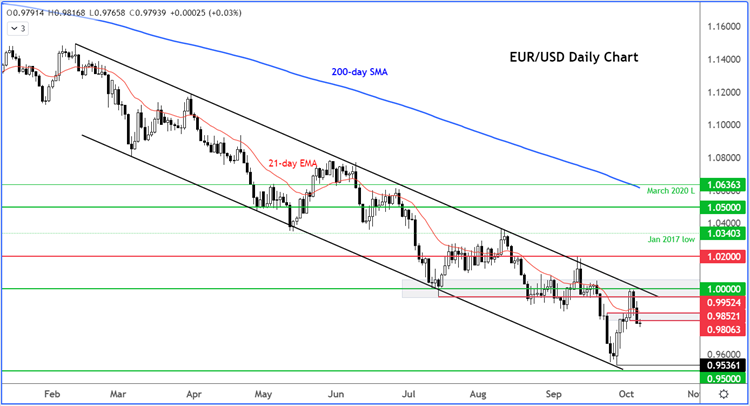 The EUR/USD hit resistance this week near the parity level and top of the bearish channel. From there it has sold off aggressively and broken below support in the 0.9850 area. As a result, the technical bearish bias has been re-established. Are we going to see a fresh drop to test the recent lows next? I wouldn’t bet against it.

Meanwhile even if we get a bit of a rally in the aftermath of the jobs report, I wouldn’t necessarily drop my bearish bias on the EUR/USD until and unless we see a breakout above the channel and parity.