EUR/USD: What doesn't kill you makes you stronger

The saying ‘what doesn't kill you makes you stronger’ cannot be more appropriate for the EUR/USD. Not only did the world’s most heavily-traded currency pair bounce sharply on Wednesday despite the release of strong US economic data, but it is still higher on the year and holding above 1.05 even though the ECB has turned more dovish and the Fed more hawkish. What’s more bizarre is the fact that we are heading into one of the most uncertain political times the European Union has faced, with Britain already on the way out while France and a few others have elections coming up which could see the appointment of more right-wing leaders. Yet, the euro refuses to break down. When a market doesn’t do what you’d reasonably expect it to, then you have to consider the alternative: has the euro bottomed out? While I am very tempted to say that is the case, we need to remain open minded as Wednesday’s bounce could easily have been driven by short-term technical, rather than fundamental, factors. Indeed, if the EUR/USD were to head lower again and eventually fall back below the key 1.0460-1.0525 support range in the days ahead, then the path to parity will re-open once again. This looks unlikely as things stand, however.

When strong inflation and retail sales data fails to keep the dollar bid, I doubt how today’s US macro numbers will impact the currency in a positive way. After all, building permits, housing starts, unemployment claims and the Philly Fed Manufacturing Index are not really top tier data. They could nonetheless provide some short-term volatility in the dollar. So we are expecting to see further dollar weakness in the afternoon session.

Indeed, right now, the EUR/USD is signalling that it wants to go higher and that it may have bottomed out. A similar technical picture can be observed on the GBP/USD, which has potentially formed a double bottom reversal pattern at 1.20. But for now, the Dollar Index remains above 100 and so long as this level holds as support, the EUR/USD bulls will need to proceed with extra care. At the time of this writing, the EUR/USD was testing short-term resistance at 1.0640, after breaking above another one at 1.0610 earlier. This 1.0610 level could be the new support to watch. Further resistance comes in at 1.0710, a break above which could pave the way for a re-test of the 1.0825-75 area again. On the downside, the sellers will need to see a breakdown of the key 1.0460-1.0525 support zone before the bias turns decidedly bearish again – that’s unless we see some other bearish reversal signs at higher levels first. 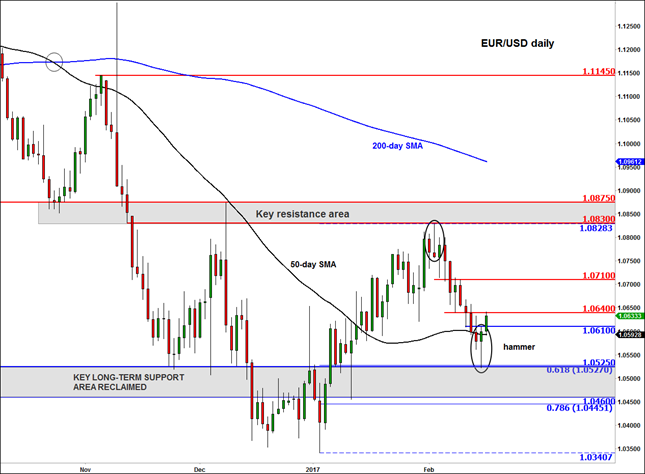