The Federal Reserve’s Federal Open Market Committee (FOMC) meets on May 3rd and 4th, with its statement scheduled for release at 2:00pm ET on Wednesday May 4 and the accompanying press conference with Fed Chairman Jerome Powell scheduled to start 2:30pm ET.

What are traders expecting from the Fed? 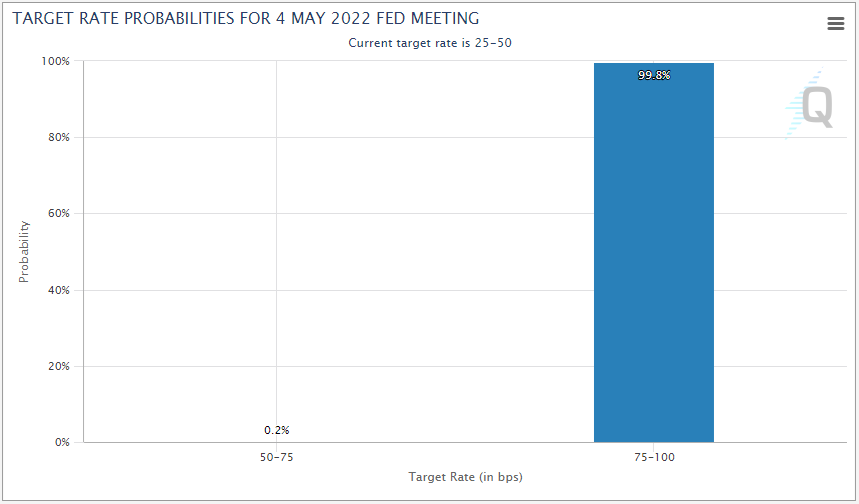 As the above market pricing implies, traders are extremely confident they know what the Fed will do on the interest rate front this month. In a testament to the central bank’s “communication as a policy tool” framework, Fed Chairman Jerome Powell was asked his view on the market’s expectations and noted that, “at our last meeting, many on the committee thought it would be appropriate for there to be one or more 50 basis point hikes…So I think markets are processing what we’re saying.” In other words, Jerome Powell and company are very comfortable with the market’s expectations, confirming the overwhelming likelihood of a 50bps rate hike on Wednesday.

Of course, with a 50bps move already fully discounted, the Fed’s interest rate decision is unlikely to be a market mover by itself. Instead, traders will focus on any tweaks to the central bank’s monetary policy statement and the tone of Fed Chairman Powell’s press conference to discern how aggressively the Fed will look to raise interest rates moving forward. On that front, Fed Funds futures traders are currently pricing in a near-90% chance of a 75bps rate hike to the 1.50-1.75% range in June, with rates currently expected to finish the year around 3.00% - recall that it started this year at essentially 0.00%! To the extent Powell discusses last week’s disappointing Q1 GDP report, he’s likely to downplay its significance, pointing to the underlying strength in consumer spending and investment.

Beyond the outlook for interest rates, the market will be keen for an update on the Fed’s balance sheet. According to the most recent FOMC minutes, the central bank is considering decreasing its $9T in bond holdings at a pace of roughly $95B/month, which would be nearly twice as fast as the last round of so-called Quantitative Tightening in 2017; this change is likely to be “phased in” over the next three months or so, with the initial $50B run off beginning this month. All else equal, the Fed’s self-imposed pullback from the bond market will drain liquidity from the financial system.

Underlying all these decisions is a strong labor market and a multi-decade high in inflation, with the March CPI report coming in at 8.5%, over four times the Fed’s 2% target rate. Unfortunately for Jerome Powell and Company, much of the price pressure stems from supply chain bottlenecks, oil price spikes, and other areas of the economy the Fed can’t directly influence by tweaking monetary policy. This has prompted some analysts to speculate that the Fed could make a policy error this year by aggressively raising interest rates just as economic growth starts to slow. While that is more of a medium-term consideration, it’s worth keeping in mind as we head into the second half of the year.

Between a strong labor market, elevated inflation, and the lack of direct economic exposure to the Russia/Ukraine conflict, the Fed has the most urgency of any major central bank to raise interest rates. The persistent strength in the US dollar is one of the biggest stories in financial markets as we go to press, and with the Fed unlikely to blink on tightening monetary policy yet, the greenback should remain well supported in the wake of the FOMC meeting. As we hinted above, the Fed is still widely perceived as “behind the curve” and that perception is unlikely to change in the next month or two.

Looking at the daily chart of the US dollar index (DXY) below, the greenback is testing the 103.00-103.80 resistance band that marks the nearly 20-year high in the world’s reserve currency. With prices clearly overbought on the 14-day RSI indicator, a short-term pullback is possible if the Fed is less hawkish than some traders are expecting, but bulls will be looking to buy on any dips toward the 100.00-101.00 range, with a break above 1.0380 (either on the back of the Fed meeting or later in the month) opening the door for a continuation toward 105.00 or higher later this summer.