Last week, we summarized July’s housing data as poor.  The release of July’s housing data concluded this week with the release of New Home Sales and Pending Home Sales.  The results were mixed for the more recent data.  New Home Sales was -12.6% MoM vs -3% MoM expected and -7.1% MoM in June. This was the lowest reading since January 2016.  However, Pending Home Sales for July were not as bad at -1% MoM vs an expectation of -4% MoM and a June print of -8.9% MoM.  Although the July print was better than expected, it’s still negative and points to a slowdown in the housing market.  The poor housing data for July was primarily due to higher mortgage rates and stale housing prices, as buyers and sellers are not yet willing to budge on price.

When will markets get the next signal for the housing market?  It could possibly be as soon as Friday when Fed Chairman Powell speaks at the Jackson Hole Symposium.  If Powell is more hawkish and expected, 10-year rates may increase and in-turn, so will mortgage rates. However, if Powell is more dovish than expected and hints at a Fed pivot, bond yields should move lower and drag mortgage rates lower as well.

US 10 Year Yields reached their highest level since 2011 on June 14th at 3.497%. Yields then moved lower, broke the neckline of a head and shoulders pattern on July 22nd and fell to support at 2.516%. This was just below horizontal support and the 50% retracement from the low of May 7th to the highs of July 14th.  The support held and yields reversed, negating the head and shoulders pattern. Yields have been moving higher since then and are currently trading at their highest level in nearly 2 months.  Notice the correlation coefficient between US 10 Year Yields and USD/JPY in the bottom panel.  The current correlation is +0.84.  Readings above +0.80 are considered to be strong positive correlations.  Therefore, as long as the correlation coefficient remains above +0.80, 10 Year Yields and USD/JPY should move in the same direction. 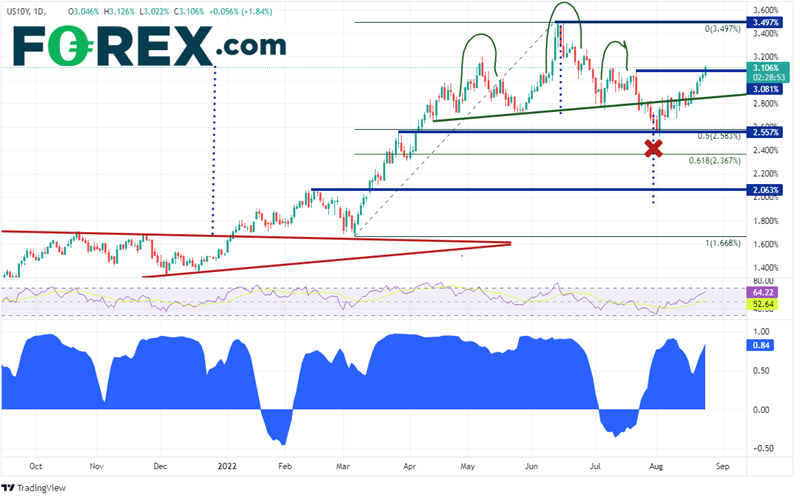 USD/JPY broke above a descending wedge on May 31st, continuing its impulsive move higher.  On July 14th the pair reached its highest level since 1998 at 139.39 before pulling back in another descending wedge. USD/JPY broke below the descending wedge on August 1st, reaching a low of 130.39 but holding support.  The next day, price traded back into the wedge and broke above it on August 17th.  Yesterday, price made a high of 137.70 as price waits for the next catalyst for more direction (Jackson Hole?).  First resistance is at the August 23rd highs of 137.70.  Above there, price can move to the highs from July 14th at 1.3939 and then the highs of September 1998 at 139.91.  However, if USD/JPY pulls back, first horizontal support is at 135.57.  Below there, price can pull back to the top downward sloping trendline of the descending wedge near 133.15, then the bottom trendline of the wedge at 132.35. 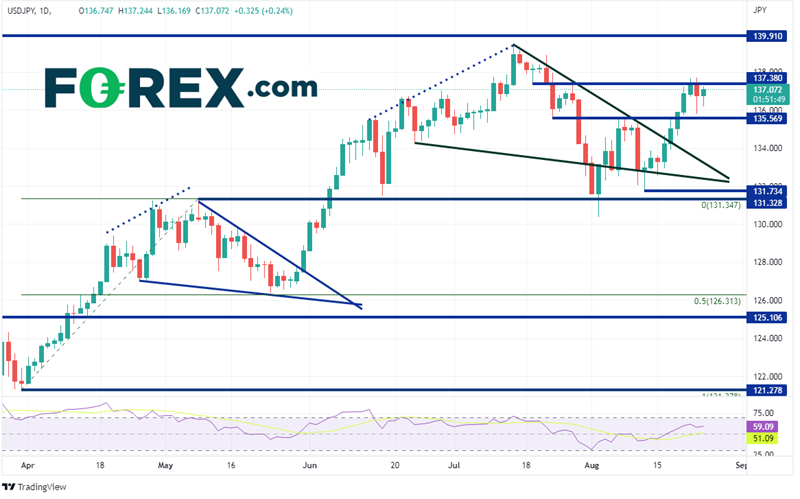 July housing data finished up this week with worse than expected New Home Sales and better than expected Pending Home Sales.  The housing data overall for the month of July has been poor, primarily due to rising interest/mortgage rates.  As a result of higher yields, USD/JPY has been moving higher as well.  Will it continue?  We may have to wait until Fed Chairman Powell’s Jackson Hole speech on Friday to find out!