Friday brings the final jobs report before the FOMC’s highly-anticipated December meeting, where the central bank will decide between a fifth consecutive 75bps rate hike and a slight slowdown to a 50bps rate hike.

According to the CME’s FedWatch tool, traders are currently pricing in a 1-in-3 chance of another 75bps rate hike, with an implied two-thirds probability of a downshift to 50bps. That said, a particularly strong or weak jobs report, especially if confirmed by the inflation data (PPI and CPI) in the first half of December, could still prompt the Fed to change its path, so expect some market volatility around the release regardless. 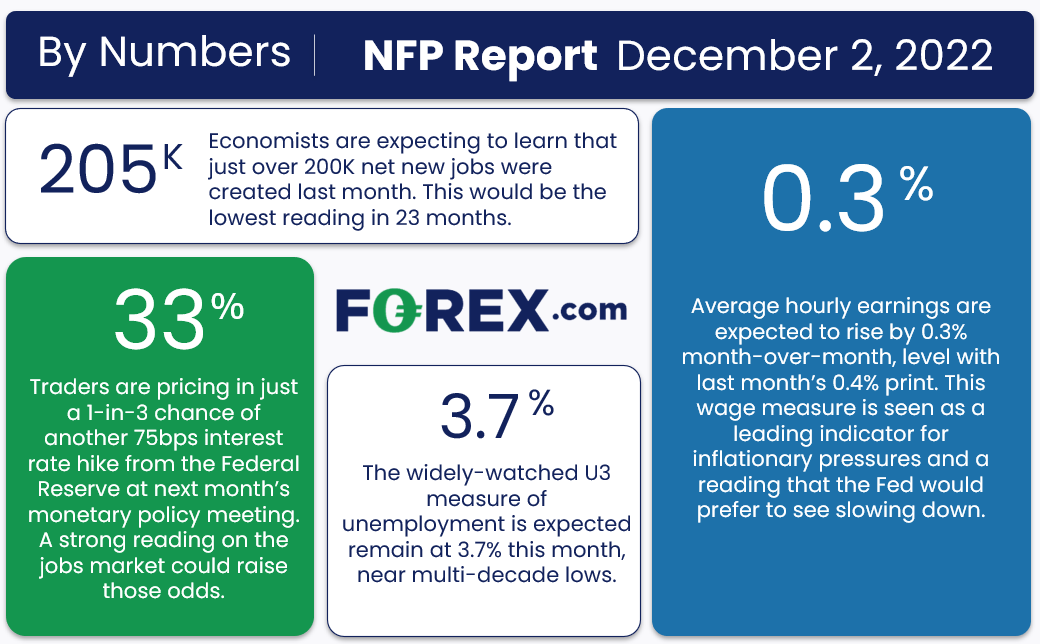 Given the vagaries of the calendar, we won’t have access to enough leading indicators to make a firm forecast for this month’s NFP report but based on the limited figures we have access to, there’s some evidence that the labor market has deteriorated over the last month. The 4-week moving average of initial unemployment claims has ticked up, while the just-released ADP employment report showed just 127K net new jobs were created in November, the lowest reading since January 2021. Notably, there was an outright drop of -86K jobs in goods-producing sectors, suggesting that manufacturing activity is slowing ahead of the holiday season.

Regardless, the month-to-month fluctuations in this report are notoriously difficult to predict, so we wouldn’t put too much stock into any forecasts (including ours). As always, the other aspects of the release, prominently including the closely-watched average hourly earnings figure which came in at 0.4% m/m in the most recent NFP report.

The US dollar index had a rough month in November, breaking below several of the key areas that had reliably provided support for this year’s uptrend. The longer-term damage to the dollar’s uptrend is undoubtedly severe, but in the short term, the world’s reserve currency is arguably oversold and could be more likely to see a bounce in the wake of NFP, as long as the reading isn’t terrible.

On the other hand, a soft jobs report could present a short-term sell opportunity in USD/JPY. The pair has been in a dominant uptrend throughout most of the year, but November’s big drop and the lack of a recovery bounce so far suggest that it may give back more of its gains if the data continues to support a “pivot” to smaller interest rate hikes from the Fed and rates break below support near 137.50.