At the start of the week, we highlighted today’s Swiss National Bank meeting as a potential under-the-radar event risk that many traders were overlooking. As we suspected, the central bank did not make any changes to monetary policy, but did take the opportunity to reiterate its review that the Swiss franc is "still significantly overvalued." For Switzerland’s heavily export-oriented economy, the value of the currency is one of the most important economic indicators, and the lack of upward pressure on the franc after last week’s ECB easing allowed the SNB to remain on hold. Indeed, in more plain language than many other central banks, the SNB vowed to continue intervening in the currency market if the franc should start to strengthen again, noting, that it, "will remain active in the foreign exchange market, in order to influence exchange rate developments where necessary."

In an update to its December forecasts, the SNB revised down its inflation outlook to -0.8% this year (from 0.5% previously) and next year’s inflation forecast down to just 0.1% (from 0.3% previously). With headline inflation running in negative territory for most of the last four years, there is a growing risk that deflation will become entrenched in the minds of consumers, causing them to push back purchases of goods in anticipation of lower prices in the future; as our friends at Capital Economics noted, this is the modern central bankers worst nightmare. Additionally, the central bank revised down its GDP growth forecast to a range of 1.0-1.5% from a point estimate of 1.5%. Like every other major central bank, Swiss policymakers have been consistently overoptimistic on the prospects for the global economy, so in a way, today’s statements are more a mark-to-market update, rather than meaningful new data.

The Swiss franc’s reaction to the release was relatively limited, though USD/CHF has fallen sharply amidst the broad-based dollar weakness. As of writing, the pair remains within its medium-term downtrend and has actually set a marginal new low beneath the .9660 level, which also marks the 50% Fibonacci retracement off the May 2015 low. With the daily MACD showing bearish momentum and the RSI indicator not yet oversold, a close below .9700 could set the stage for another leg down toward 61.8% Fibonacci support at .9550 or even lower in the coming days. 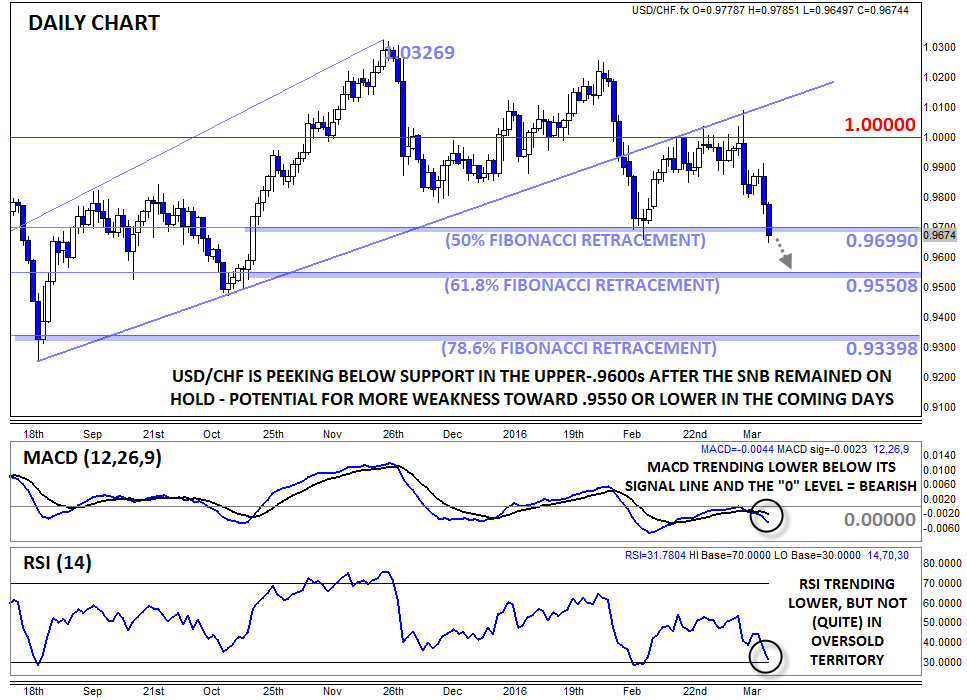