Crude oil prices are lower for the second consecutive week, with WTI around 2% lower and Brent some 1.5% worse off on the session. Tuesday’s spike higher in reaction to news of that explosion in eastern Poland, after a sharp 4% drop the day before, has been undone. In other words, the extra geopolitical premium that was built yesterday in oil prices have now been removed. The focus is turning back to the demand side of things and in particular China, where rising covid cases are starting to unnerve investors, and which was part of the reason why oil prices saw a big drop on Monday. But China is not alone. Soaring inflation in the UK and Eurozone and elsewhere around the world are also hurting demand.

With inflation rising across the world, and oil prices remaining elevated compared to levels we saw in 2020 and 2021, demand for oil is expected to remain weak. The International Energy Agency reckons demand growth will slow to 1.6 million barrels per day (bpd) in 2023 from 2.1 million bpd this year. Likewise, the OPEC cut its forecast for 2022 global oil demand growth for a fifth time since April. It now sees global oil demand growth at 2.5 million bpd in 2022 after slashing the fourth-quarter demand projections by nearly 400,000 bpd.

Still, if China imposes new covid restrictions and thereby hamper demand, prices will likely fall further in the coming weeks. WTI is at risk of falling to $80, especially now that it has broken out of its triangle pattern to the downside: 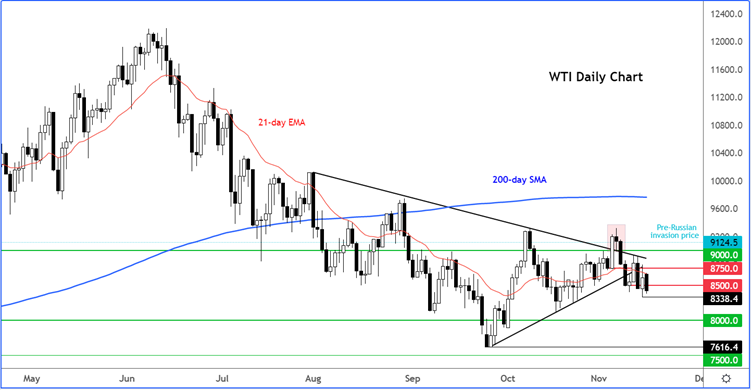 In terms of the immediate focus, attention will turn to the EIA stockpiles data expected at 15:30 GMT (10:30 ET). After last previous bigger-than-expected drawdown, expectations are that supplies fell last week by around 2 million barrels. But according to the American Petroleum Institute (API) figures, they fell by 5.8 million barrels. Not that this provided any support to prices today. Let’s see what the official data reveals.