Yes, inflation may have peak but it “remains far too high”

Sometimes the obvious needs to be said. And that is exactly what the BOC’s deputy governor said in his op-ed by stating inflation “remains far too high”.

Despite CPI falling to 7.6% y/y from 8.1% and core CPI down to 6.1% y/y from 6.2%, the Canadian dollar was higher on the day. But it also depends on which metric we look at, as two out of the three inflation measures the BOC’s prefer actually increased. Furthermore, common CPI (their favourite) hit a record high and also upwardly revised from June. Deflation is required for absolute prices to return to ‘normal’ levels

We’ve seen evidence of peak inflation in the US and, to a degree, Canada. And that has prompted a double-digit rally for US equities. Whilst it’s within the nature of forward-looking markets to get ahead of themselves, I can only suspect the ‘peak inflation rally’ to be a false flag or short-covering rally at best, given inflation levels remaining eye-wateringly high. Even the Cleveland Fed’s own Nowcast model for CPI is pencilling in a higher inflation print for August.

To put things into perspective, for prices to return to previous levels we would need to close to double-digits of deflation. Yet what we’re now seeing is single digits of disinflation. Prices are still rising, but not as fast as they were. So in a relatively expensive nutshell, once the reality sinks in that high prices are here to stay, we may begin to see equity markets lose some steam or top out. And that applies to all regions, not just the US. 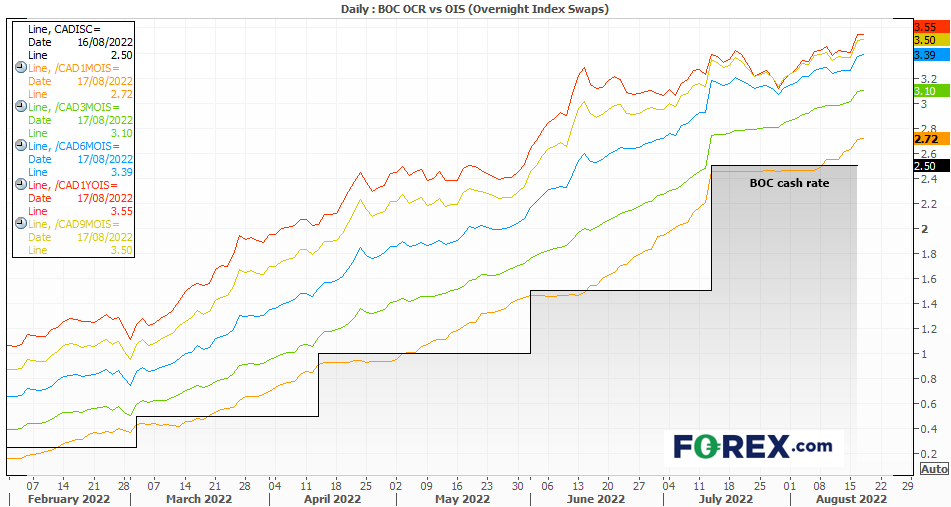 Canada’s 1-month OIS estimated an ~88% chance of a 25-bp hike at the BOC’s next meeting in September for rates to sit at 2.75%. And the 3-month has fuelled priced in rates to be at 3% by their December meeting. Furthermore, the 9-month OIS has fully priced in rates to be sat at 3.5% by mid 2023. But I’m now questioning whether this is high enough, as inflation may turn out to be as stickier than feared. And the BOC’s deputy governor may be feeling the same way as he feels inflation remains “far too high”. 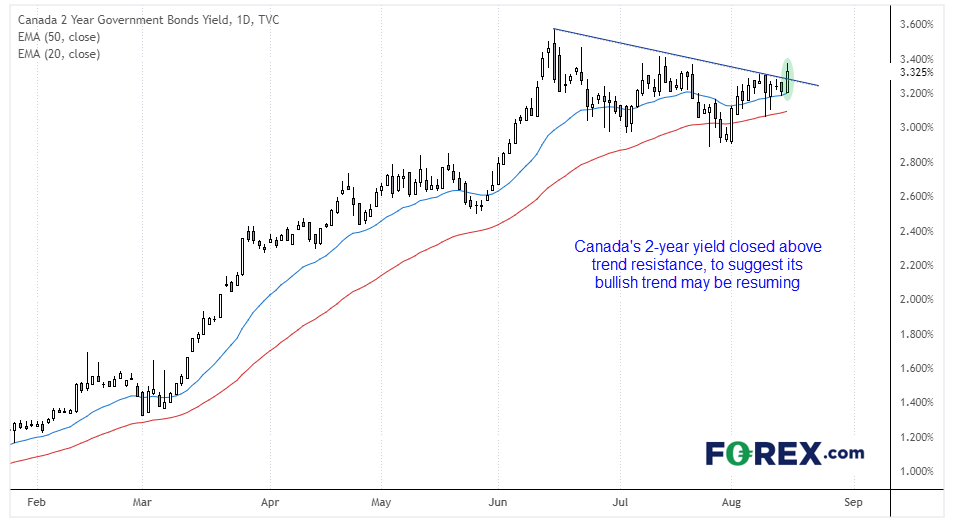 The fact that Canada’s 2-year yield closed above trend resistance suggests it could be setting up to retest (and break to) new highs. Traders tend to focus on the 2-year yield as it is more sensitive to monetary policy. Given a bullish hammer found support at the 50-day eMA and yesterday’s low found support at the 20-day eMA shows momentum is increasing. And that could be beneficial for the Canadian dollar going forward. Looking through the CAD pairs the most appealing one for a potential setup is EUR/CAD. The cross remains within an established downtrend on the daily chart, and a double top has formed at 1.33 with a second bearish Pinbar. The 50-day eMA also capped as resistance and prices are now beneath the monthly pivot point, respecting the monthly pivot as resistance. A move down to 1.2800 seems plausible, with the monthly S1 pivot and 1.2974 lows potentially providing interim support.