I last wrote on crude oil last Tuesday HERE, when I suggested that the price of black stuff remained supported due, among other things, to ongoing productions cuts from the OPEC and some allies outside of the cartel. This view was emphasised in yesterday’s OPEC+ meeting by oil minister of Saudi Arabia: Khalid A. Al-Falih insisted that the group should maintain the production cuts even beyond the agreed end of June deadline. Meanwhile, thanks to the past oil drop, the growth in US oil output appears to be slowing again. Baker Hughes reported last week that active oil rigs the US had declined for the fourth consecutive week to its lowest level since last April. However, the rig count is likely to rise again now that prices are recovering, which should keep oil prices capped in the long-term. For now, though, the path of least resistance continues to be to the upside on both oil contracts. 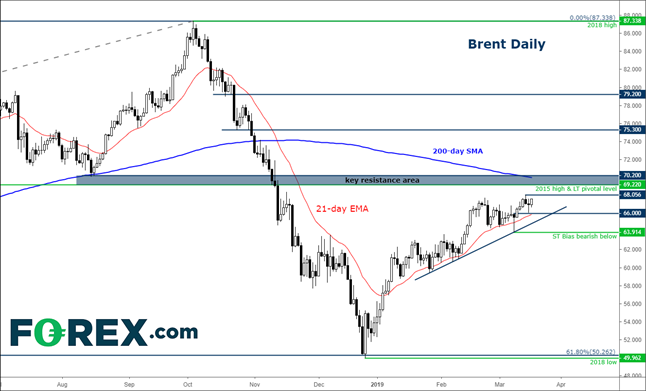 Whereas WTI climbed to a fresh high for the year of $59.20 today, Brent is still below its 2019 high of $68.12, which it hit on Thursday. Nonetheless, the short-term technical picture remains constructive for Brent, for now. Brent has been making short-term higher highs and higher lows; it is holding near this year’s high and is above the 21-day exponential moving average, which has a positive slope, objectively telling us that the trend is indeed bullish. That being said, Brent is approaching a massive technical area around $69.20 to $70.20. The lower end of this range marks the 2015 high ($69.22) while the upper end is where old support meets the 200-day average and the psychologically-important $70.00 handle. So, there is the possibility we could see oil prices top out in this region, although before things get bearish we will first need to see the breakdown of market structure of higher highs and higher lows.