Last month’s manufacturing PMI rebound is under question after today’s weak print, weighing on AUD whilst equity trader’s question if PBOC will provide yet more stimulus.

Last month’s manufacturing PMI rebound is under question after today’s weak print, weighing on AUD whilst equity trader’s question if PBOC will provide yet more stimulus.

After expanding for the first time in 5-months in March, global sentiment lifted as calls for China’s downturn to have bottomed rose. Yet today’s data shows manufacturing barely expanded at 50.1 and missed expectations of 50.4. Furthermore, new orders and production declined which adds further pressure to the headline number going forward. 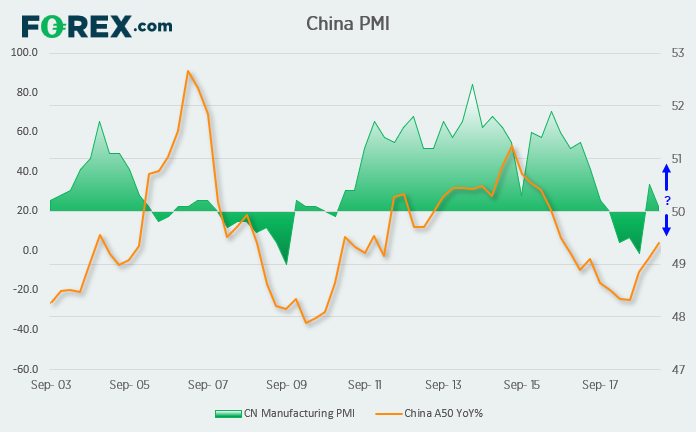 Using manufacturing PMI as a proxy for their business cycle (even if it’s a manipulated one), it tends to track YoY% returns of the China A50 index. So today’s weak data set adds further headwinds for their equity markets, especially since PBOC seemingly shifted to a neutral stance last week and effectively reducing fuel for their stimulus-fuelled stock rally. Whilst it remains touch and go as to whether China’s PMI’s have troughed or will revert to contraction, it could be a crucial point for their markets if PBOC remain neutral. So far, the China A50 CFD is holding up as markets presumably expect PBOC to add further stimulus if incoming data points to further weakness. A morning star reversal formation has formed above the 50% retracement level and the 13,369 lows, where a break above 13,805 confirms a bullish reversal. Still, if the breakout lacks momentum keep an eye for a potential ‘right shoulder’ to form as part of a head and shoulders top, which could signal a deeper correction. With China being a key trade partner with Australia, its no major surprises to see AUD as today’s weakest major and showing potential signs of a top. A potential bearish outside candle is forming on the four-hour chart below a cluster of resistance, comprising of the 50-eMA and 38.2% Fibonacci level. If USD can regain some traction ahead of tomorrow’s FOMC meeting, then it leaves potential for another test of 70c over the near-term.