Oil prices have managed to make back a good chunk of their initial losses after gapping lower following an eye-catching tweet from Donald Trump at the weekend.

Oil prices have managed to make back a good chunk of their initial losses after gapping lower following an eye-catching tweet from Donald Trump at the weekend. The US President claimed that Saudi Arabia King bin Salman had agreed to his request to increase crude oil output by 2,000,000 barrels (per day?) to compensate for what he called the “turmoil and disfunction in Iran and Venezuela.” So far, Saudi has not confirmed it had agreed to the request, merely pointing out that the two leaders had discussed the need to "preserve the stability of the oil market.”

While Trump is correct in identifying one of the major causes of the recent oil price rises, the market knows that Saudi won’t risk initiating another oil production war. The economic wounds of the collapse in oil prices in 2014 is still fresh. In fact, Saudi had already increased its oil production by a good 700,000 to 10.7 million barrels per day in June, according to a survey by Reuters. This means Saudi’s oil output is now well above the level specified in the production cut agreement anyway. Therefore, to say any further sharp increases would upset other OPEC members and Russia would be an understatement. It is also worth remembering that the “disruptions” mentioned by Trump here is partly due to his own actions after he announced the US would re-impose economic sanctions on Iran. Thus, it is unlikely that Saudi would raise its oil production by anywhere near 2 million barrels per day despite King bin Salman apparently agreeing that crude output needs to rise. Perhaps the King was being polite as he didn’t want to upset one of his close allies.

All that being said, we are certainly not bullish oil prices at these levels. While momentum could certainly help keep prices go a bit further higher, the growing oil production in the US may eventually derail the rally. Venezuelan oil production won’t remain low forever, either. But we can’t exactly be bearish on prices if they are not falling. After a sharp two-week rally and given their refusal to fall following Trump’s tweet, oil prices may actually spike to new highs for the year before we see any significant retracement or correction. Only when there is technical evidence of a top in oil will we turn bearish on prices. For now, we are neutral as we are fully aware of the possibility that momentum may carry oil prices higher for a while yet, possibly towards the 127.2% Fibonacci extension level shown on the WTI chart at $75.40. But if WTI were to break below today’s earlier low of $72.60, this would be a short-term bearish development and a subsequent drop towards the bullish trend and support at $69.35 would not come as surprise. 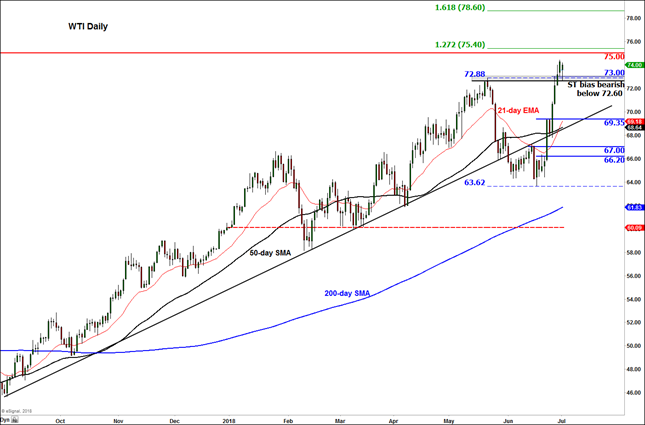