The bullish momentum from yesterday faded a little with European stock indices and US index futures both edging slightly lower at the time of writing, although the markets weren’t exactly selling-off.

The bullish momentum from yesterday faded a little with European stock indices and US index futures both edging slightly lower at the time of writing, although the markets weren’t exactly selling-off. It looks like some investors might still be unnerved by the recent sell-off in government bonds, which have caused yields to rise across the board. But the rising yields are seen as being positive for banks and the likes of Barclays (+2.7%) and Deutsche Bank (+1.5%) were showing relative strength this morning. There are also a few other reasons to be cheerful. The recent weakness in the euro should be positive for European stocks, as it boosts overseas earnings and exports. What’s more, the negativity surrounding the Italian budget, which provides for a significantly higher deficit than had been expected, may be priced in by now. Indeed, the sell-off in Italy’s benchmark index, the FTSE MIB, has stalled for the time being. In addition, there was some good news out of Italy for a change: the latest industrial production data showed a 1.7% jump in output in August, according to Istat. This was the strongest showing since December 2017. Other Italian economic pointers of late haven’t been too bad, suggesting the political crises have not affected the economy outside of the financial markets yet.

Is DAX trying to bottom out?

Among the European indices, the German DAX index is looking rather interesting. After a sharp drop, the DAX managed to bounce back almost 200 points from its low of 11800 yesterday. Eventually, it ended the day around 15 points higher at 11977 after opening 11963. As a result, the index created a long-legged doji candle on the daily chart. Usually, after an extended drop, such technical patterns are found at the bottom of downtrends. That’s especially the case when there’s a false break below a prior low. In this case, the potential false break scenario being below the September low of 11865 – as the index refused to hold below this level yesterday.

So far in today’s session, however, there has been no follow-through on the upside. So, if the bearish trend continues and the index closes back below that 11865 level then this could pave the way for further losses to come with the next pool of liquidity below the March low at 11725 being an attractive target for bears.

Still, the technical signal from yesterday could be a positive sign for the major indices, so let’s see if the bulls will show up later on. Should the buyers show their presence again, then it is imperative that they not only push the index above the 12000 resistance level, but hold their ground there. IF they do that then it is possible we could see the index push higher in the days to come, with the gap fill at 12111 being the first bullish objective, followed by the next resistance at 12200.

But for the longer-term picture to turn bullish, we need the DAX to break through the downtrend and create a higher high above the most recent significant high at 12460. Until we see a clear sign that the downtrend is over, any rallies in the interim should be taken with a pinch of salt. 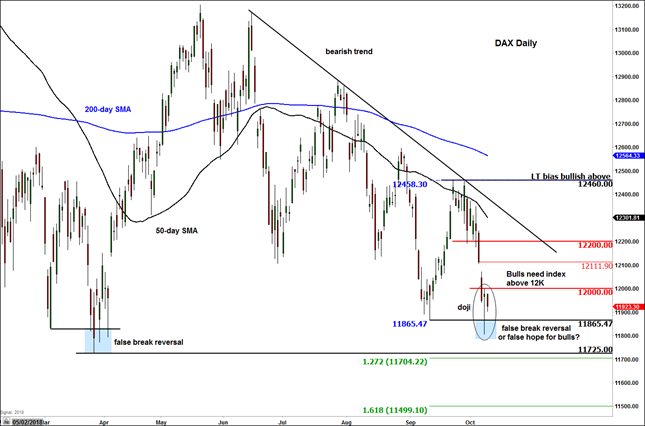