The EUR/GBP could be on the verge of a breakdown after the European Central Bank’s policy decision on Thursday.

The EUR/GBP could be on the verge of a breakdown after the European Central Bank’s policy decision on Thursday. While the central bank’s plan to end quantitative easing programme at the end of the year was a hawkish development, investors had already priced in that decision. But the market was caught off guard with the ECB’s apparent commitment that it would hold off raising interest rates until at least the summer of 2019. This was a dovish move as previously the market had anticipated an earlier rate increase. The single currency plunge’s was a swift one on Thursday. While it may now be due for a short-term pullback, the damage may have already incurred by that dovish statement. So, don’t be surprised if the euro were to weaken further in the days and weeks to come.

Meanwhile the Bank of England is scheduled to make its policy decision on Thursday of next week, which means the EUR/GBP will be in sharp focus next week. The BoE was actually meant to raise interest rates in May but was forced to think twice after a series of data misses in the UK. In that meeting, BoE policymakers ended up voting 7-2 to keep rates unchanged at 0.5% and this is how they are most likely to vote again, even if this month’s macro pointers have on the whole been much better. However, the BoE wants to be sure that the economy is recovering sustainably before it raises borrowing costs again. Rate futures currently show around a 50% chance of a hike in August, the next time the BoE updates its growth and inflation forecasts. The BoE’s Governor Mark Carney has suggested that interest rates were likely to rise by the end of this year. However it is very unlikely to be this month.

Despite the BoE’s U-turn on an interest rate hike in May, the EUR/GBP could not benefit much at all and Thursday’s ECB decision has once again opened the prospects of a correction for the Chunnel. Surely the BoE cannot get any more dovish on Thursday. If anything, a hawkish surprise could be on cards given the slight improvement in UK data of late. Thus the pound could regain its poise against some of her weaker rivals going forward.

Ahead of the BoE policy decision, the EUR/GBP looked like it wanted to break its pennant consolidation pattern to the downside after spending months in a tight range. With price holding below both the 50- and 200-day moving averages, and with the latter also pointing lower, this tells us objectively that the trend is indeed bearish. It will remain that way until and unless price climbs back above the pivotal 0.8840 level (where prior resistance meets the 200-day average) or forms a distinct reversal pattern at lower levels first. However the now broken support at 0.8780 could prevent price from reaching that mark. This is now the key resistance that the bears will need to defend in order to maintain control.

In the event of a potential breakdown, the EUR/GBP could head significantly lower over time. But in the short-term, some of the potential bearish targets could be at 0.8700 initially ahead of 0.8670, 0.8620 and 0.8510 next. These levels were previously support and/or resistance. 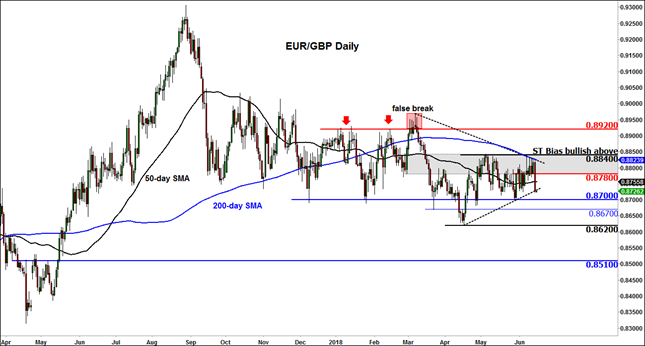