The latest US inflation numbers were again slightly below expectations, causing the Dollar Index to further extend its losses, with the Canadian dollar leading the gains thanks to a much stronger jobs report from the North American nation.

The latest US inflation numbers were again slightly below expectations, causing the Dollar Index to further extend its losses, with the Canadian dollar leading the gains thanks to a much stronger jobs report from the North American nation. Headline CPI came in a touch softer at +0.3% m/m or 2.0% y/y, although core CPI met estimates at 2.1% y/y. In the dollar’s slipstream, European currencies were finding some support, with the likes of the GBP/USD and EUR/USD extending their gains following this morning’s mixed data from Europe.

Meanwhile, ongoing US-China trade uncertainty and the lack of any breakthrough so far today has seen the dollar trade mostly lower. The greenback was still higher against the yuan, but weaker against most major currencies.

Earlier, UK’s first quarter GDP came in bang in line with expectations at +0.5% q/q but on a month-over-month basis, GDP missed at -0.1% for March vs. 0.0% expected. Construction output fell surprisingly sharply by 1.9% but manufacturing production beat at 0.9% month-on-month, helping industrial production to print an above-forecast 0.7% reading. Clearly, manufacturers are stockpiling ahead of the UK’s eventual exit from the EU. There is no fresh Brexit news to report.

As a result of the above fundamental considerations or otherwise, the GBP/USD has broken above its short-term bearish trend line today. Prior to today’s price action, the cable had sold off sharply earlier this week until it found support around its 61.8% Fibonacci retracement level yesterday. The week before, it had rallied noticeably to wipe out losses from around 5 weeks. So, the longer-term picture is turning slightly bullish.  In the short-term, if the cable can now build a base around its breakout level of 1.3025 then we may see the buying momentum gather pace later on today or in early next week. However, a daily close back below the 1.30 handle and all the bets would be off again. 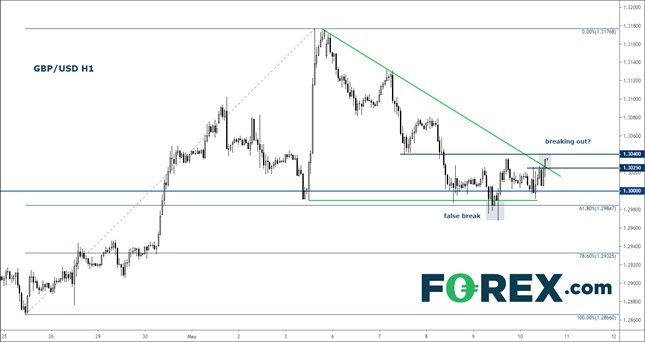