OIL MARKET WEEK AHEAD: The ball is in non-OPEC producers’ courts

Next week’s US oil and economic data will carry more weight than usual..

While parts of Europe are tentatively dipping their toes into a lighter form of a lockdown, with Austria planing to reopen businesses from next week and Denmark restarting schools, the pandemic is claiming a much higher toll in the US. Given that the US is a little bit behind Europe on the virus spread curve, next week’s US oil and economic data will carry more weight than usual as it will very quickly provide an insight in how badly the ravaging of the coronavirus is affecting the domestic oil market.

Saudi Arabia and Russia have temporarily buried their hatchets, under duress, and together with other OPEC members agreed to cut production by 10m/bbl a day. Though the decision has been a long time coming, the size of the cut will only make a dent in the declining oil price given that global demand has dropped by more than 30% since the start of the pandemic. Some smaller European countries are talking about a slight easing of lockdown rules but to put it into perspective, they have already said that they will keep their borders closed and not allow international travel and holidays until there is a vaccine.

This means that the two main strands of oil demand, demand from cars/buses and jet fuel demand for the airlines, are unlikely to seriously tick up before the autumn. Now that OPEC and Russia have made their move, the rest of the support for the oil industry will have to come from elsewhere. At today’s G20 meeting, it is possible that the other countries will be asked to either commit to lower production or to buy more oil for their strategic reserves to take some of the surplus out of the market. The ball will be mainly in the courts of the largest producers, including Canada, Mexico, Brazil and the US.

Possibly the scariest US data at present, apart from the number of infected people, is the galloping increase in initial jobless numbers. On current count the last three weeks have brought 3.3m new jobless, then 6.8m and this week another 6.6m new job seekers. Until the tide of job losses begins to turn there is no chance of the oil market changing trend either, other than on a very temporary basis, as the fundamental underlying domestic demand continues to be far less than pre-crisis levels.

The Energy Information Administration’s report on Wednesday is likely to show a further decline in oil production and deeper destruction of domestic US demand. Refinery utilisation rates have already dropped to 75.6%, down from 82.9% earlier this month and US crude oil refinery inputs thinned out by 1.3m bbl per day to average 13.6m bbl per day. The number of rigs operating in the US has declined by almost 10% to 664, a loss of 361 rigs compared to the rig count a year ago. In the week ahead, look out for further news from producers, be it about abandoning future projects, shuttering parts of production or cutting jobs. 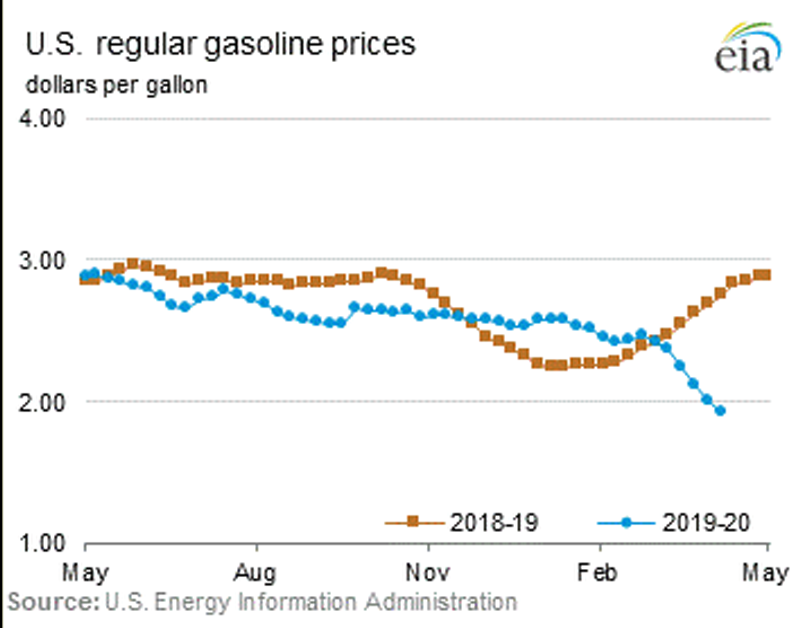