Recap: Stocks give back some post-G20 gains while Brexit undermines pound

There is a real risk that we may not see any real follow-through in gains for stocks because US indices had already gone up for several days prior to the G20 summit last week.

Following the overnight gap in almost everything, stocks, crude and gold remained sharply higher during the morning session, while the US dollar was lower as yuan and commodity dollars all rebounded. By the time the US markets opened, the GBP/USD had turned lower while the global indices had also lost some ground, although the latter were still higher on the day at the time of writing. Sentiment was boosted by a truce in US-China trade war and as oil prices rallied after Russia's President Vladimir Putin said his country is willing to continue to cooperate with Saudi Arabia on managing crude output. However, stocks and crude prices both eased off their best levels as the session wore on.

Risks skewed to downside for stocks

There is a real risk that we may not see any real follow-through in gains for stocks because US indices had already gone up for several days prior to the G20 summit last week. People who had bought on the rumour, could sell now that the news is out. What’s more, although the 90-day truce is definitely a positive development, talks can falter when they reach more difficult issues and there are no guarantees that the two nations will manage to strike a trade deal. Thus, the risks are skewed to the downside for equities – especially given the developing technical developments on the indices, with the Dow and S&P both currently showing shooting star candlestick pattern on their respective daily charts (see Dow’s chart below).

Brexit, meanwhile, continued to undermine sterling today. The beleaguered currency could not react positively to incoming UK data once again after the manufacturing PMI suggested domestic activity picked up slightly in November. The Labour party has warned that the UK faces a “constitutional crisis” if Prime Minister Theresa May does not publish the full legal advice on her Brexit deal. The government has published only an overview of the legal advice it received with the Prime Minister saying the advice is confidential. However, some MPs think the government is deliberately withholding the full legal advice as it does not want to admit it says the UK could be indefinitely tied to EU customs rules.

GBP/USD holds 1.27 support but could break as Parliament unlikely to pass EU deal

Market participants are evidently growing in confidence that the EU deal on offer is unlikely to get passed in Parliament and so they are apparently pre-empting this outcome. But once again, the GBP/USD has managed to bounce back from the long-term support around 1.2700.  The fact that this level has been tested several times may mean support is strong. However, if that’s the case then surely price should have broken higher by now. So, I am anticipating a potential breakdown in the coming days.

FX traders have plenty to look forward to this week. Already, we have had the manufacturing PMI reports from several nations today showing a mixed overall picture, although the market reaction was muted as they were overshadowed by news of the US-China trade war truce. The upcoming rate decisions from the RBA (Tuesday) and BOC (Wednesday) should keep FX traders busy, although neither central bank is looking to hike, which means rates are likely to be kept at 1.50 and 1.75 percent respectively. The OPEC meeting is on Thursday and a production cut is looking increasingly likely, but how will crude prices react given that this outcome may have been priced in by the time they announce the cuts? This week we will also have Australian GDP, UK retail sales, US ADP payrolls and ISM services PMI on Wednesday; Aussie retail sales and German factory orders on Thursday, and last but not least the monthly jobs reports from both North American nations on Friday. 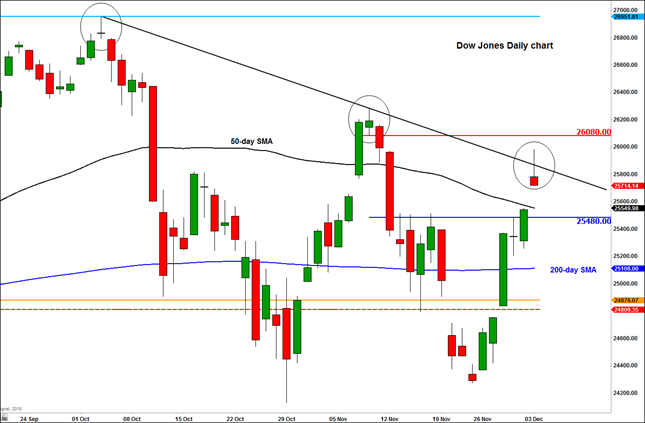