The Impact of the Coronavirus on USD/CNH

If the coronavirus is contained, we may see the 7.0000 level hold in USD/CNH.

As the Chinese markets remain closed for the Lunar New Year Holiday, which was recently extended until February  2nd, the impact of the Coronavirus on China can be seen through the USD/CNH.  With the spread of the virus throughout China, southeast Asia, and even across the world, many have questioned what the impact will be on the Chinese and world economy.  For example, Germany’s Lufthansa says they will suspend flights to and from China until February 9th, Starbucks is closing half their stores and said the Coronavirus will have an impact on Q1 earnings, and Morgan Stanley says they are assuming the coronavirus will peak in Feb/March and could cut China’s GDP by 0.5-1% in the first quarter.

If markets are assuming the Coronavirus will have an economic hit on China, then the USD/CNH should be trading higher, which it is.  On January 20th,   USD/CNH put in a hammer candlestick formation, which is a one candle formation when price trades to new lows early in the day and bounce later in the day to close near unchanged, forming a hammer.   Since then, USD/CNH has been moving higher and traded out of falling wedge.  The target for a breakout of a falling wedge is a 100% retracement of the wedge, which is near 7.0865.  However, on the move higher, the pair has stalled near the psychological level of 7.0000, which is also near the 200 Day Moving Average. 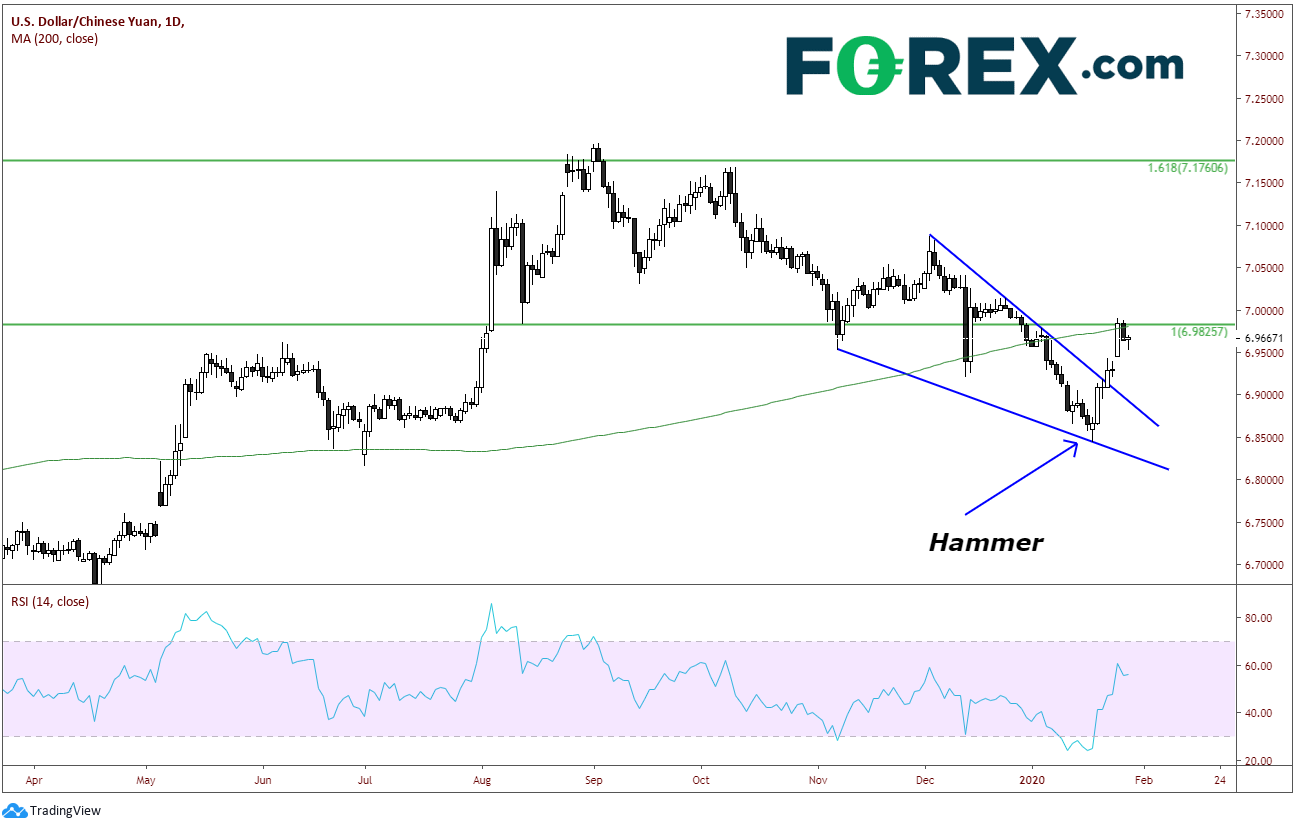 On a 240-minute timeframe, USD/CNH has actually been in a channel downtrend since September 3rd, 2019.  After a false breakdown on January 20th to the hammer lows (on the daily), price moved higher and gapped higher on this past Sunday’s reopen from 6.9265 to 6.9452.  The gap has yet to be filled. In addition to the psychological resistance and they 200 Day Moving Average, the stall in price is also near the 38.2% Fibonacci retracement level from the previously mentioned timeframe and the top downward sloping trendline from the channel.

7.0000 is first resistance level.  If price breaks above, 7.02 is the 50% retracement level of the same timeframe and horizontal resistance.  The 61.8% retracement level is near 7.06, however there are small resistance levels to stop the pair from moving back up towards 7.19.  First support is the gap fill from last weekend at 6.9308.  Below that is some minor horizontal support near 6.87, but the large support of recent lows and bottom trendline of the channel hear 6.8448.

As the coronavirus continues to spread, watch for 2 things in particular that may give an indication that the virus may be slowing: 1) the rate at which it is spreading 2)the number of companies which are closing operations for a period until the virus is contained.  These will give us a better idea of how well the virus is being contained.  And if the coronavirus is contained, we may see the 7.0000 level hold in USD/CNH.