This morning, representatives from the United States and Mexico announced that they had reached a new bilateral trade agreement to replace NAFTA. At a high level, the deal requires that 75% of automobile contents come from the two countries (up from 62.5% previously), with 40-45% of the labor used to create automobiles earning at least $16/hour. In addition, the two countries were able to refine the rules around textile trade and protection for biological drugs. Crucially, the US was forced to drop its demand for a “sunset clause”; instead, the trade agreement will be reviewed every six years.

Of course, the big question now is what this deal means for Canada, the other previous member of NAFTA. Reading the headlines, it seems as if Mexico is eager to integrate Canada into the agreement as soon as possible, whereas the Trump Administration appears more reticent, perhaps as part of a negotiating stance to wrest more concessions out of the US’s Northern neighbor.

In any event, FX traders are viewing the progress as an optimistic sign for both the peso and the loonie. Technically speaking, USD/CAD is trading lower by nearly 0.5% to test a key support level around 1.2950. In addition to being the 2-month low for the pair, this area also represents the 38.2% Fibonacci retracement of the entire February-July rally.

The pair remains within a near-term bearish channel and has just broken below the trend line connecting its prominent lows in February and April, suggesting that the bears have the upper hand for now. Meanwhile, the RSI indicator is in a bearish trend of its own, showing that the longer-term bullish momentum is turning more bearish.

Looking ahead, a confirmed break of support in the 1.2950 could expose the 50% Fibonacci retracement just above 1.2800 next, whereas a bullish reversal here could hint at a bounce back to the top of the channel near 1.3100 later this week. Obviously, traders will be keeping a close eye on Canada’s progress negotiating a trade deal in the coming days, but if today’s breakthrough is a harbinger of things to come, USD/CAD could have further to fall from here. 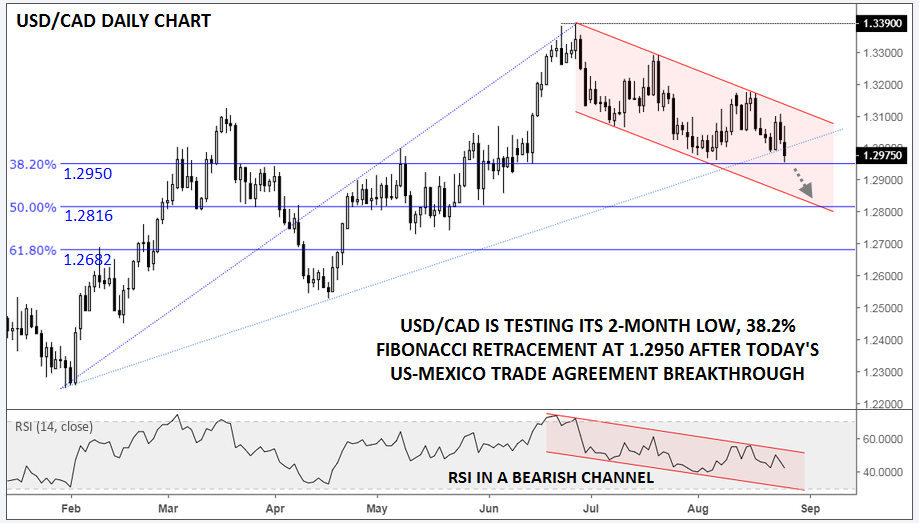