The focus remains firmly on US-China trade talks, but the upcoming release of US CPI inflation and Canadian jobs numbers will at least momentarily shift the focus back to economic fundamentals.

The focus remains firmly on US-China trade talks, but the upcoming release of US CPI inflation and Canadian jobs numbers will at least momentarily shift the focus back to economic fundamentals. The USD/CAD is the pair to watch as North American traders enter the fray.

Tariff man Trump is a man of his word

In case you missed it, the US government did pull the trigger after all, following through on Donald Trump’s promise at the start of the week, and hiked tariffs on Chinese imports, although trade talks will continue today. The US hiked tariffs from 10% to 25% on $200bn of Chinese goods and, as you would expect, China has vowed to retaliate.

A few moments ago, in a series of tweets, Trump said that talks with China “continue in a very congenial manner” but there is “absolutely no need to rush - as Tariffs are NOW being paid to the United States by China…” He added that the US will “continue to negotiate with China in the hopes that they do not again try to redo deal!”

Will there be a trade deal after all?

Despite raising tariffs, Trump yesterday said he is confident a deal can be reached ‘this week’ after he received a ‘beautiful letter’ from Chinese President Xi Jinping. Global stocks have dropped sharply this week, although Chinese markets recovered a big chunk of their losses overnight while European markets also bounced back. US index futures were trading in the positive territory at the time of writing. Investors are on the edge but a positive breakthrough in talks should send the markets further higher. However, if the situation remains unclear by the close of play, we might see some panic selling in the closing minutes of today’s North American session. It goes without saying, if the trade talks break down, then expect to see a massive slide.

US CPI and Canadian Jobs up next

It is worth pointing out that if the imposition of the latest tariffs on Chinese exports remain in place for a long time, this would push up import costs and may ultimately lead to higher inflation in the US over time, everything else being equal. However, the impact of the additional tariffs will not show up in today’s consumer inflation data and so we wont’s have a conclusive answer as to whether low inflation is indeed “transitory,” as per the Federal Reserve’s current assessment.

Given that we will have top tier data from both North American nations coming up and not to mention the ongoing US-China trade talks impacting the US and commodity dollars (and almost everything else), it will be a busy day for the USD/CAD exchange rate. The trend remains bullish on this pair as indicated for example by the rising moving averages as well as price making higher highs and higher lows. If the Loonie breaks above the recent range high at 1.3520 then watch 1.3570 for a potential reaction, for this level is an untested old broken support. On the downside, the shaded region around the 1.3385 remains the key support zone. 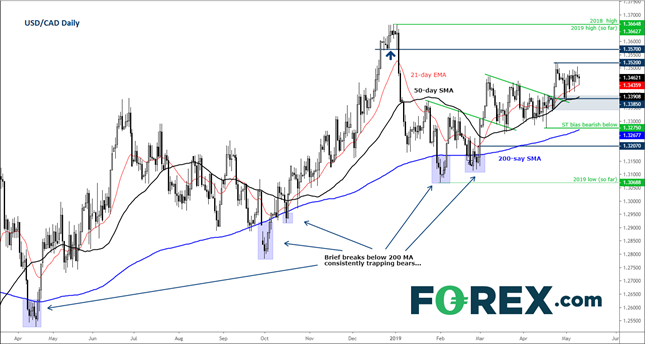