Tonight’s BOJ meeting could well be one of the more interesting of this week’s events…and no, that’s not a typo! Japan’s central bank has left its primary interest rate essentially unchanged in the -0.1% to 0.00% range since late 2010, preferring to conduct monetary policy through its asset purchase program (QQE). Some market participants believe this program of stock and bond buying could be meaningfully changed for the first time since it was enacted in 2016.

Lately, BOJ policymakers have emphasized the downsides of its current policy, such as the hit to bank earnings, lack of sustainability, and most importantly, the fact that it hasn’t achieved its primary purpose of generating sustainable inflation. The primary tweaks that the BOJ may consider include allowing interesting rates to fluctuate in a wider band around the central bank’s target and broadening the universe of equities that it buys.

For instance, the central bank may allow the yield on its benchmark 10-year bonds to temporarily rise above the current threshold of around 0.10% (while keeping its ultimate target unchanged). Alternatively, traders will be on alert for any change to the BOJ’s bond and ETF purchases, which some analysts believe have distorted markets in recent years. If either of these tweaks are instituted, it could signal that the BOJ is incrementally moving toward removing the extraordinary monetary stimulus of the past near-decade. That said, we wouldn’t be surprised to see the central bank stand pat for now, especially with policymakers likely having to revise down their inflation and GDP forecasts to account for the recent soft patch in economic data.

With the BOJ potentially nearing a monetary policy crossroads, it’s not surprising that USD/JPY is at a technical crossroads of its own. The pair has been testing its bullish trend line off the late March low for the past week; depending on the substance and tone of the BOJ meeting, the pair could see a bearish breakdown (opening the door for a move down to previous support near 110.25 next) or a bullish bounce from support (clearing the way for a recovery back toward 112.00+). One way or another, USD/JPY traders should be on high alert in today’s Asian session! 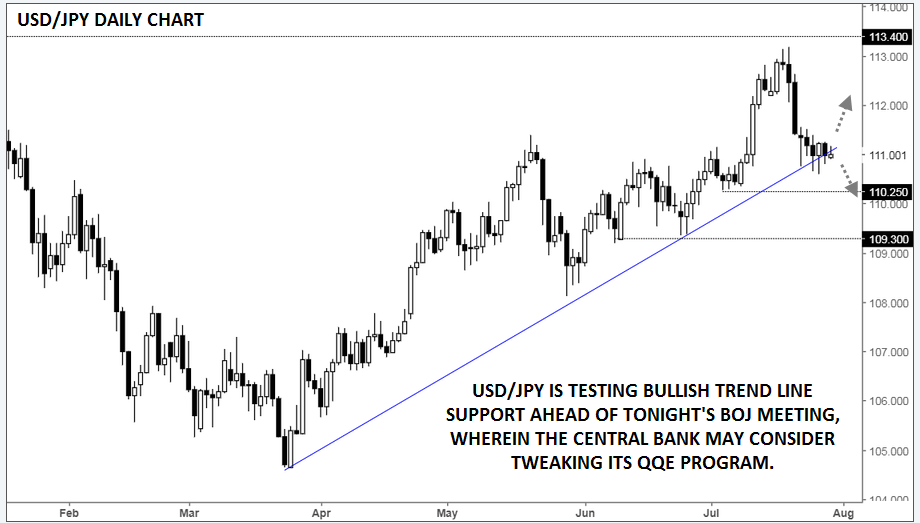