What to Expect from this Weekend's Australian Federal Election

In terms of key policy differences, the Liberal National Coalition (LNP) has promised a range of long-dated tax cuts out to 2025 and to promote economic growth via infrastructure spending. On the other hand, the Australian Labor Party (ALP) has promised increased spending on health and education to be funded by higher taxes. Both parties have committed to budget surpluses and paying down debt.

Although the lead has narrowed, the polls continue to point towards a comfortable win for the ALP. As such, an ALP win is likely to largely be priced into Australian equity prices and the Australian dollar.

Of course, as we learned from Donald Trump’s shock win in the 2016 U.S. election and before that the Brexit referendum in 2016, polls are not infallible. However, without a hugely polarising personality like Trump or an issue like Brexit, it seems reasonable to take the polls on the Federal election on face value.

Over the past decade, Australian politics has delivered the same number of PM changes as Italy. As such, Australian voters and investors have become used to changes in PM’s and this is likely to have numbed the financial markets to another change in PM.

The risk - a positive shock?

Some of the ALP’s policies which include proposed changes to franking credits and negative gearing are viewed as not particularly “market-friendly”. Should the LNP coalition pull off a surprise win and retain power, it may result in both Australian shares and the Aussie dollar enjoying a brief relief rally of sorts.

While we would never say never, the upcoming Federal election is unlikely to have a meaningful impact on Australian equity prices or the Aussie dollar. Instead, the primary driver of both markets will continue to be U.S. – China trade issues, the dovish pivot undertaken by major central banks at the start of 2019 and other fundamental and technical factors. 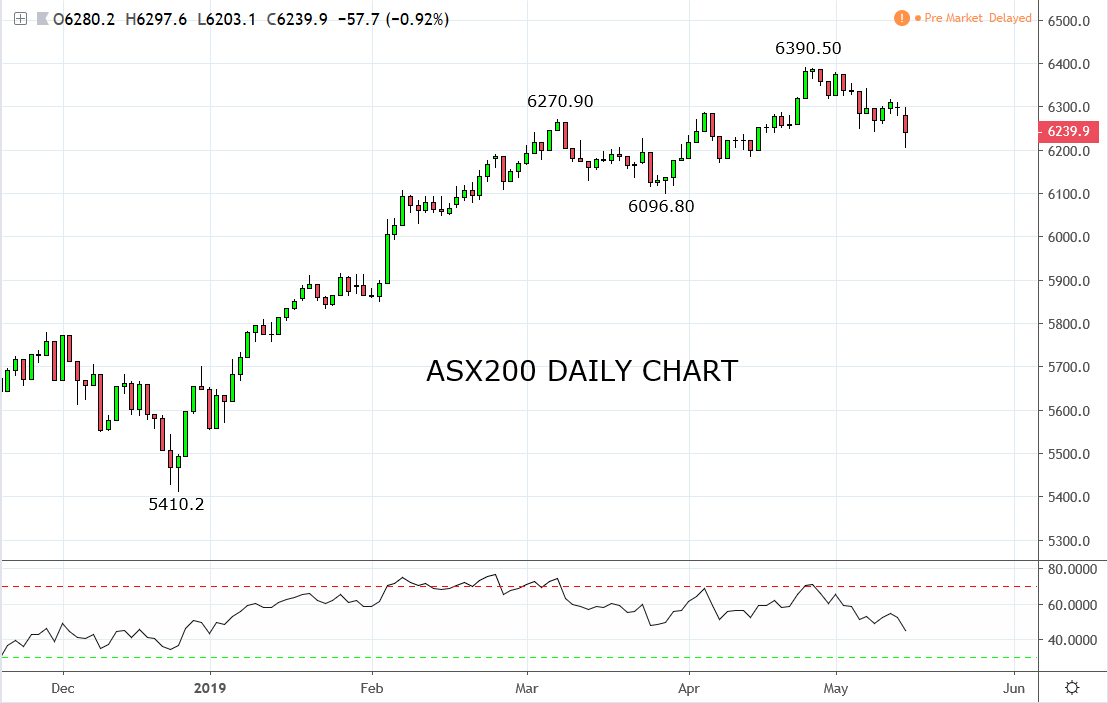 Source Tradingview. The figures stated are as of the 15th of May 2019. Past performance is not a reliable indicator of future performance.  This report does not contain and is not to be taken as containing any financial product advice or financial product recommendation

Trading foreign exchange, futures and CFDs on margin carries a high level of risk and may not be suitable for all investors. The high degree of leverage can work against you as well as for you. Before deciding to invest in foreign exchange, futures or CFDs you should carefully consider your investment objectives, level of experience, and risk appetite. The possibility exists that you could sustain a loss in excess of your deposited funds and therefore you should not invest money that you cannot afford to lose. You should be aware of all the risks associated with foreign exchange, futures and CFD trading, and seek advice from an independent financial advisor if you have any doubts. It is important to note that past performance is not a reliable indicator of future performance.

Any advice provided is general advice only. It is important to note that: