USD/JPY: What’s next after government intervention for yen?

The British pound might have stolen the show for all the wrong reasons at the start of this week as it plunged to a record low in a mini flash crash, but let’s not forget about the yen. The Japanese currency has also been plunging in recent times, so much so that last week it required intervention from the Japanese government to stem its decline or counter "excess volatility," in the words of Japanese authorities afraid of drawing criticism from the US. But while the government has started to intervene and warned of more action to counter the yen’s volatility, the USD/JPY has stabilised and threatens that 145 handle again, which proved to be the line in the sand for Japan. The key question is: what’s next for the yen, and can it fall more despite the government’s efforts?

Following Bank of Japan’s inaction last week, the US dollar nearly reached 146 against the yen on Thursday. Japan’s government then stepped in the FX market to buy a so far undisclosed amounts of yen, in its first such intervention since 1998. But after the USD/JPY slumped to near 140.00 in immediate response, the currency pair then started to head higher again and was sitting around 144.00 at the time of writing on Monday.

Even the BoJ Governor, Kuroda, has come out and said that the intervention was the appropriate move, because it was taken to address “FX volatility,” echoing Suzuki’s remarks that the recent declines had been one-sided and rapid, and thus negative for the economy.

However, at the same time, Kuroda has said that the BoJ has to keep its current, ultra-easy, policy unchanged in order to support the economy. Last week, the BoJ governor had said that the central bank would leave its forward guidance unchanged for the next two to three years.

In other words, the BoJ is stepping on the accelerator and the government on the brakes at the same time. Something is going to break if you do that, so Japan needs to get its act together and fast. This approach is not sustainable.

Perhaps there is no line-in-the-sand such as the 145 handle in the USD/JPY exchange rate for the government, and it is instead focused on taming volatility as it has indicated. Any further buying of the yen may be limited, otherwise it will draw criticism from the US and other developed nations.

The government will either have to let the USD/JPY find a ceiling itself by allowing the yen to weaken more or make a change at the way the BoJ is managing its mandates – perhaps by replacing Kuroda and other BoJ policymakers. For the government’s intervention to be more effective, the BoJ will need to close its diverging monetary policy stance with the US Federal Reserve (and other major central banks around the world).

So, I reckon that the USD/JPY is likely to bounce back and really test the Japanese government’s resolve. Until the BoJ changes tack, or the Fed stops hiking, the yen will not find long-lasting support. The Japanese government needs to work together with the BoJ. Otherwise, the USD/JPY will probably keep pushing higher or at least stick around 145.00. 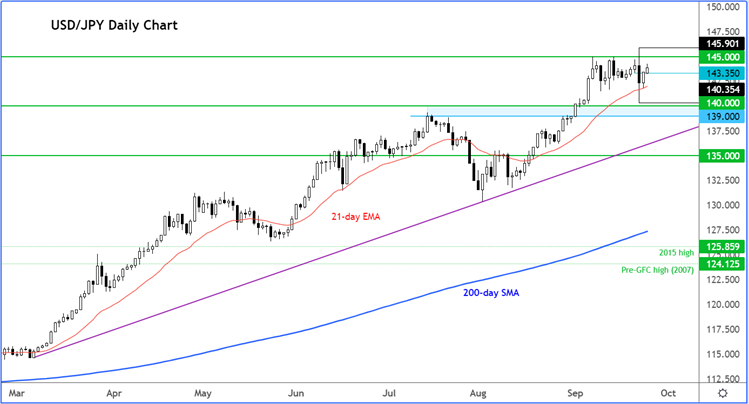