Last week, the Central Bank of the Republic of Turkey (CBRT) surprised markets by cutting interest rates 100bps to 13% from 14%, despite an increase in inflation during July of 79.6% YoY, the highest level since 1998! Expectations were for the CBRT to leave rates unchanged.  This was the first time the central bank cut rates since December 2021, when it ended its string of consecutive rate cuts and lowered rates by a total of 500bps!  The central bank noted that it sees inflation decreasing after the Russia/Ukraine war. Recall that Turkey’s President Erdogan had been instructing central bank governors to cut the main interest rate since inflation began rising after the pandemic.  If they did not do as instructed, they were fired.

Over the weekend, the CBRT took steps to decrease the gap between its policy rate and lending rates.  The central bank replaced an existing 20% RRR for credits with a higher 30% treasury bond collateral requirement (Reuters). 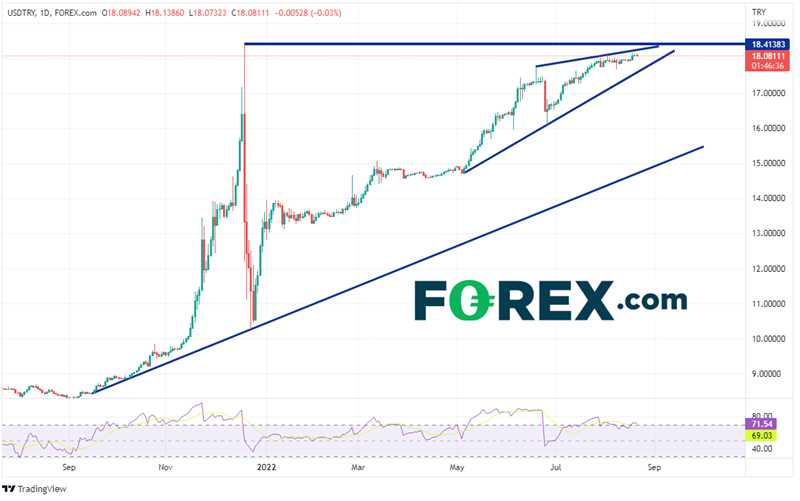 On a 240-minute timeframe, USD/TRY has been rising in an ascending wedge formation since late June.  The expected breakout of an ascending wedge is lower.  If price is to move lower, it must first break through the horizontal support at 17.6731.  Below there, price can fall to the bottom, upward sloping trendline of the wedge bear 17.6000 and then additional horizontal support at 17.2684.  However, if the pair continues higher, there is a confluence of resistance just above at the 127.2% Fibonacci extension level from the highs of June 19th to the lows of June 27th near 18.2167 and the top upward sloping trendline of the wedge near 18.2167.  Above there, USD/TRY can move to the highs from December 2021 at 18.4138, then the 161.8% Fibonacci extension from the previously mentioned timeframe at 18.7962. 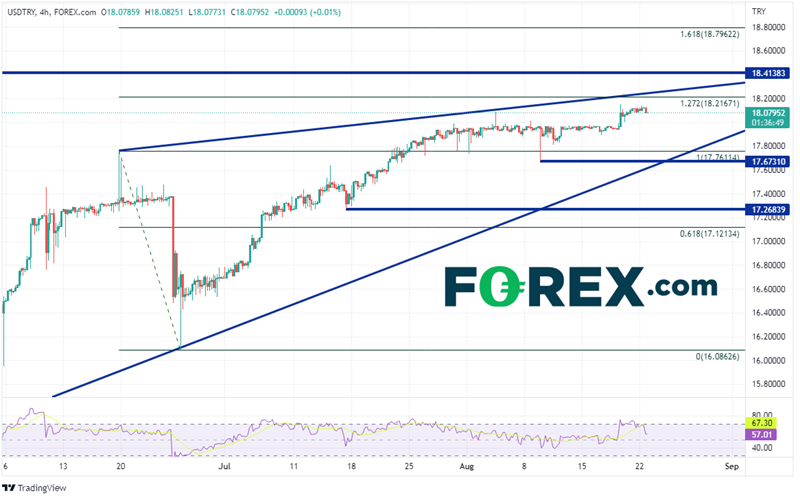 After last weeks surprise rate cut by the CBRT, USD/TRY moved to its highest level since December 20th, 2021.  Could the pair take out the previous highs?   With inflation continuing to increase and the central bank continuing to cut rates, it makes sense that the pair will continue higher.  However, remember that the market doesn’t always act rational!