Before China left for the long holiday, Caixin released its Manufacturing PMI for April , and the data wasn’t pretty.  The headline reading was 46 vs and expectation of 47 and a March reading of 48.1  This was the third month since the beginning of 2022 that the print has been below the 50 level, which is considered the contraction/expansion level.  Earlier today, Caixin released the Services PMI for April, and it was even worse. The headline print was 36.2 vs 42.1 expected and 42 in March.  This is well below 50 contraction/expansion level.  It was also the lowest print since the pandemic began in February 2020. The official China PMI data was similar.  This is just more evidence of the slowdown occurring in China as a result of the recent lockdowns and restrictions put into place as a result of the Zero Covid policy.

USD/CNH had been moving lower in an orderly fashion after putting in a high of 7.1987 during the week of May 25th, 2020.  After reaching a low in February 2021 near 6.400, the pair began moving sideways outside the channel.  The move resolved itself in a year-long descending wedge from May 2021 to April 18th of 2022.  The target for the breakout of a descending wedge it a 100% retracement of the pattern.  As USD/CNH broke above the top, downward sloping trendline, the pair began moving higher with gusto, reaching the target of the pattern in only 2 weeks!  In addition, price moved above the 38.2% Fibonacci retracement level from the highs of May 2020 to the lows of February 2022, near 6.6461. Today price reached its highest level since early November 2020 at 6.6979.  Notice on the weekly timeframe that the RSI is in overbought territory, an indication that price maybe ready for a pullback. 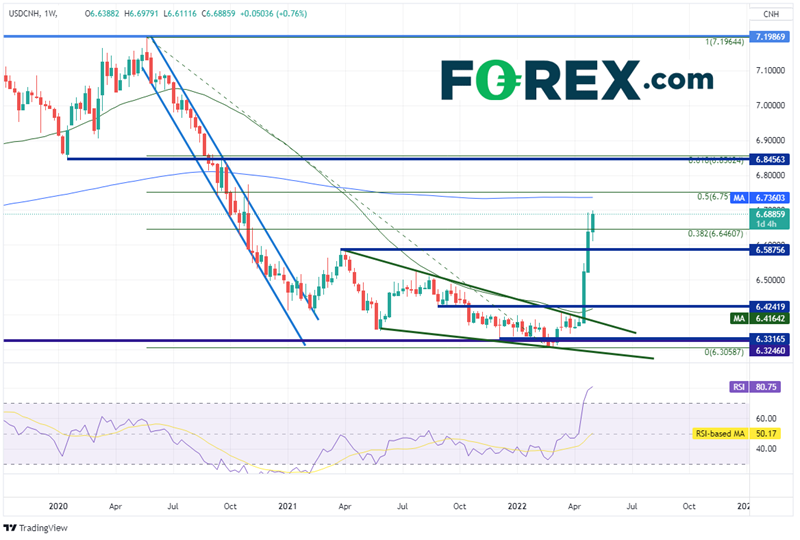 On a 240-minute timeframe, USD/CNH has formed a flag pattern.  The target for a flag pattern is the length of the flagpole added to the breakout point of the flag, which in this case is near 6.9400.  However, if price is to get to the target, it must first break through resistance at the top of the flag (and today’s highs) at 6.6979.  Above there, resistance is at the 50% retracement level of the above-mentioned timeframe near 6.7511, and then a confluence of resistance at previous lows from January 2020 and the 61.8% Fibonacci retracement level between 6.8456 near 6.8562. First support is at the bottom trendline of the flag pattern near 6.6158, then horizontal support at the top of the descending wedge near 6.5875 (see weekly).  Below there, USD/CNH can fall to additional horizontal support at 6.4242 (see weekly). 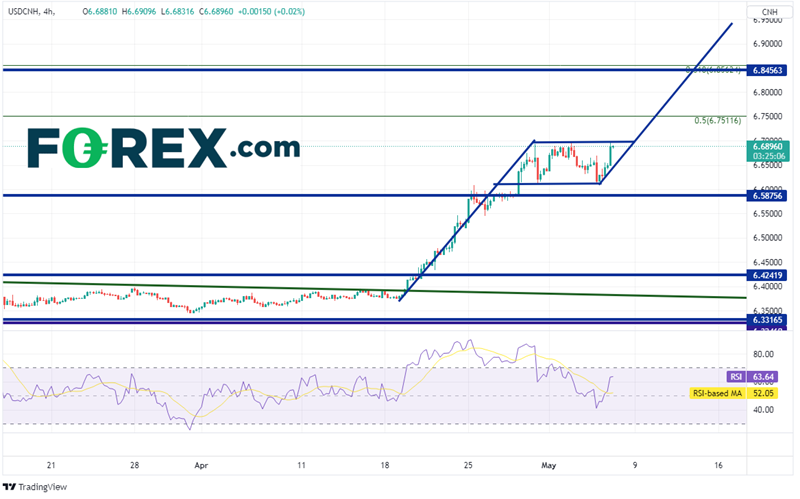 The lockdowns in China have led to weaker manufacturing and services data.  Is this just the beginning or is there more to come?  As a result, the Yuan has weakened, and USD/CNH has gone aggressively bid.  The shorter-term chart shows the pair is consolidating in a flag formation, while the longer-term chart shows an overbought RSI.  If price continues to move sideways, watch for the longer-term RSI to unwind, which will allow the pair to move to the flag target near 6.9400!