Service sector activity in China was dragged lower due to the recent rise in COVID-19 cases and subsequent restrictions aimed at curbing the virus. Dropping from 50.2 to 42, China’s service PMI contracted at its fastest pace since Q1 2020 at the height of the pandemic. And the -8.2 point drop was its fastest monthly decline since August 2021. 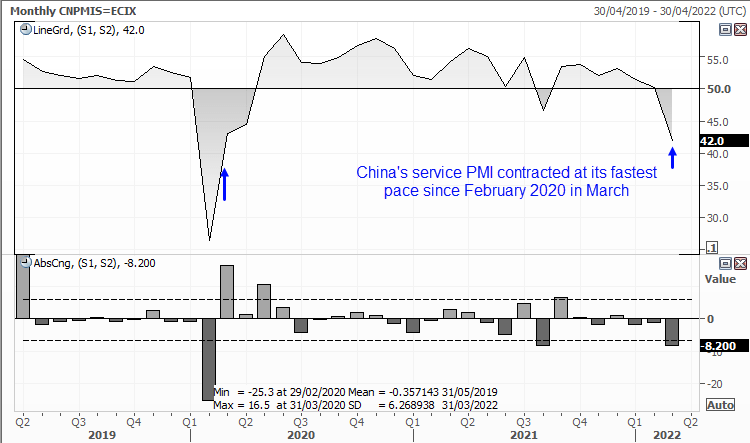 Perhaps more worryingly is that the new orders sub index fell at its fastest rate since March 2020, as this can be seen as a leading indicator for the headline number. And with prices rising and exports falling for a third month, China’s PMI is tracking the global theme of lower growth prospects coupled with inflationary forces.

Copper prices fell to a two-day low as the weak PMI printed simply added to the selling pressure caused by yesterday’s hawkish comments from two Fed members. With a 50-bps hike at the FOMC’s next meeting in May increasingly likely, the US dollar has rallied for four consecutive days and is adding further pressure on base metals such as platinum, palladium and copper.

A stronger dollar and weak China PMI data has weighed further on palladium this week, and traders remain net-short the futures market. In fact, they have increased their short exposure and reduced their long holding over the past three weeks. 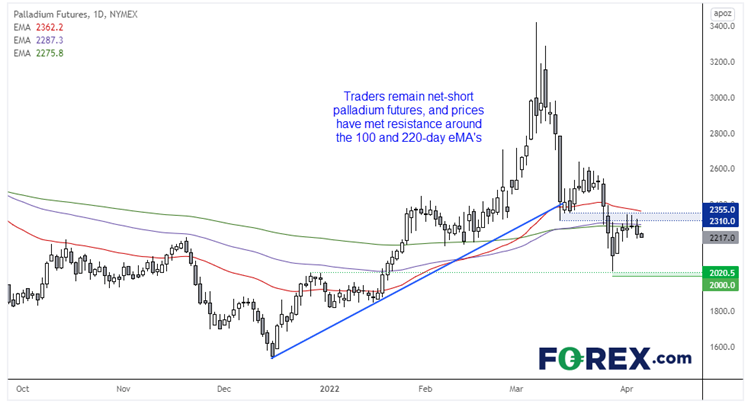 Traders remain heavily net-long gold futures markets, and that’s clearly helping to support prices overall. Yet the stronger US dollar and lack of safe-haven demand are capping its upside potential. It’s certainly taken the shine from gold as each rally from 1916 support fails to hold on to any gains. Price action remains choppy overall and hesitant to commit to a particular direction, leaving us with a neutral bias over the foreseeable future. But we suspect bulls will get the last laugh whilst prices remain above 1900.