A growing number of analysts are expecting that many of the world’s leading economies will suffer negative growth in the next few months, and this will drag the US into a recession. Central banks around the world now have a single mandate and are aggressively tightening monetary policy in an effort to bring inflation under some form of control. They have to get inflation down, even at the cost of a recession. The Fed has been very explicit in terms of wanting to create a soft landing for the economy. They dare not lose what little credibility they have left.

With investors now fearful that a recession might be looming, they are selling everything now: crude oil, copper, stocks, crypto – you name it. It looks like investors are also expecting the potential recession to be a prolonged one.

Europe is already in a recession, when you consider how poor the German economy has been performing over the last few months.

The US downturn could potentially happen at a later point in time than the Eurozone, judging by the recent macro data.

While some economists are expecting only a modest downturn in the US, there is no guarantee that it won’t last for a long time. In fact, elevated inflation may see the Fed hold back from rushing to loosen its belt again. This may mean the potential recession lasting longer than would otherwise be the case.

With all these concerns at the forefront of investors’ minds, crude oil prices are likely to be on a slippery slope for a while. We will now likely see investors sell into the rips than buy the dips, especially as THIS trend line has been taken out: 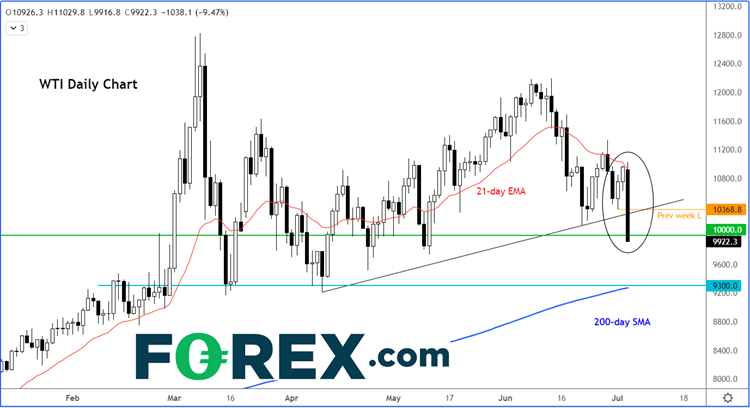 From here, I wouldn’t rule out an oversold bounce now. But if and when the selling resumes, the 200-day moving average at just below the $93.00 handle could be the next target for the bears.