What casual traders may not realize however, is that the greenback has given back all of those gains, and indeed, the US dollar index is trading within 1.5% of where it closed the day before the last national election. Despite trade wars, tax cuts, and an aggressively tightening Federal Reserve, the US dollar has done essentially nothing under President Donald Trump.

With that in mind, we’re relatively sanguine about the prospects for the world’s reserve currency on the eve of a new national election. Current polling suggests that the Democrats will be able to gain control of the House of Representatives, with the Senate likely to remain under Republican control; according to the polling mavens at FiveThirtyEight.com, there’s approximately an 85% probability of each of those events occurring, though as many found out two years ago, there’s still a reasonable chance of a surprise one way or another.

Some argue that continued Republican control of both houses, if seen, would be more likely to result in another round of tax cuts, potentially stimulating the economy and prompting the Federal Reserve to raise interest rates more aggressively. The conventional wisdom is that a split government would be less likely to pass meaningful economic policies, perhaps putting more pressure on the Fed to keep the economy healthy (read: lower likelihood of aggressive interest rate increases) as we head into 2019 and 2020, potentially hurting the greenback. Interestingly, infrastructure investment is an issue that both parties agree upon in principle, so any talk of a large-scale infrastructure plan in the wake of the elections could provide further support for both the US economic and the buck, regardless of how the election shakes out.

Technically speaking, the US Dollar Index broke out of above previous resistance at 97.00 last week…before promptly reversing back to finish the week in the mid-96.00s. To the downside, the rising near-term trend line around 96.00 could provide support on any dips (with a break below exposing 95.00 or 94.00 next), whereas established resistance near 97.00 may cap short-term rallies. Sticking with the “round number” theme, a confirmed break of last week’s highs could target the June 2017 high around 98.00 next. 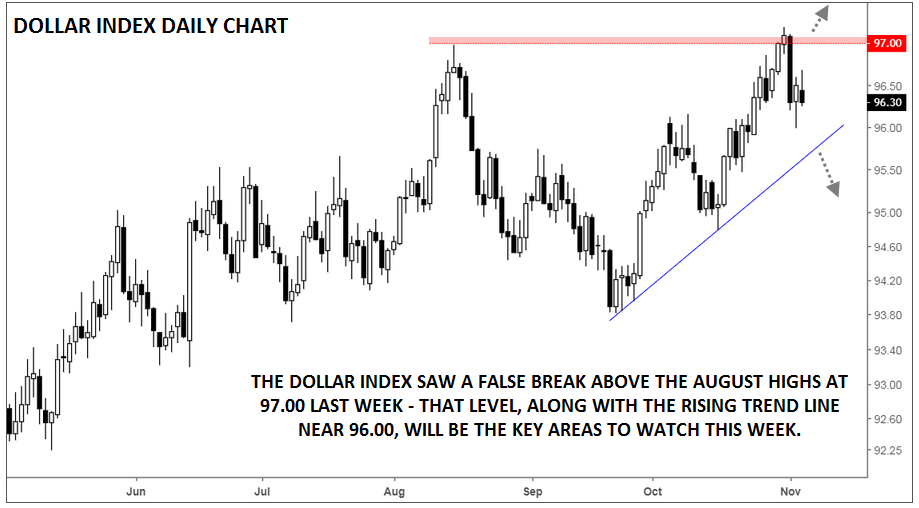