The FOMC left rates unchanged today and noted that monetary policy moving forward is not only going to depend on the coronavirus, but also the vaccine rollout.  However, the real story of the day was in stocks.  Traders continued to punish GME shorts and TSLA missed expectations by 23 cents ($0.08 vs $1.03 estimated).

S&P 500 futures broke lower out of an ascending wedge and was met with the 200 Day Average at 3706.50. The next level of support on the daily timeframe is the green trendline, which dates to January 2018 near 3650. 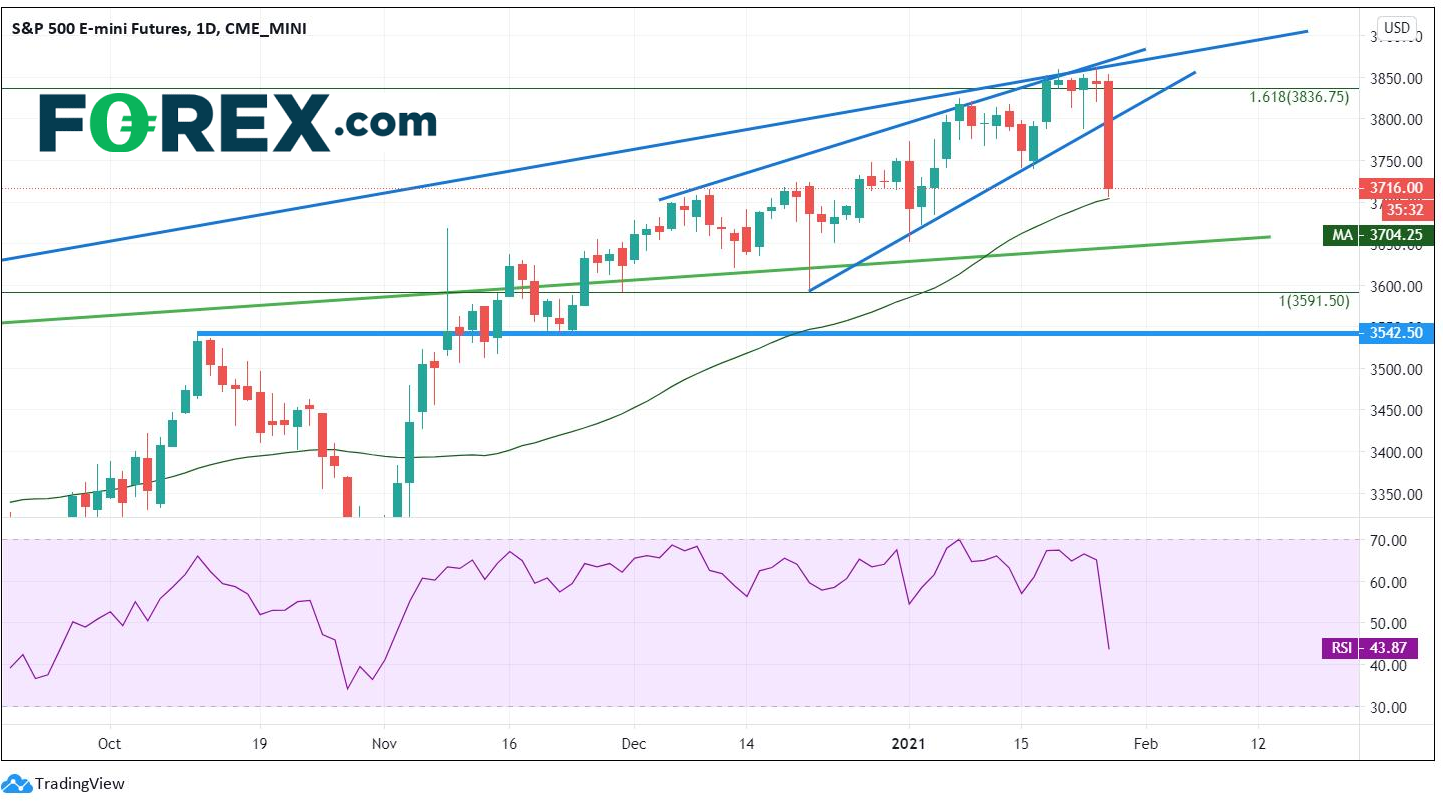 Meanwhile, the Nasdaq 100 futures are down nearly 4% after Telsa earnings, halting at the bottom trendline of an ascending wedge of its own.  If price breaks lower, the 200 Day Moving Average crosses at 12630.

As stocks moved lower, the US Dollar moved higher, closing the day up near up nearly 0.5% and just below its own 200 Day Moving Average near 90.65. 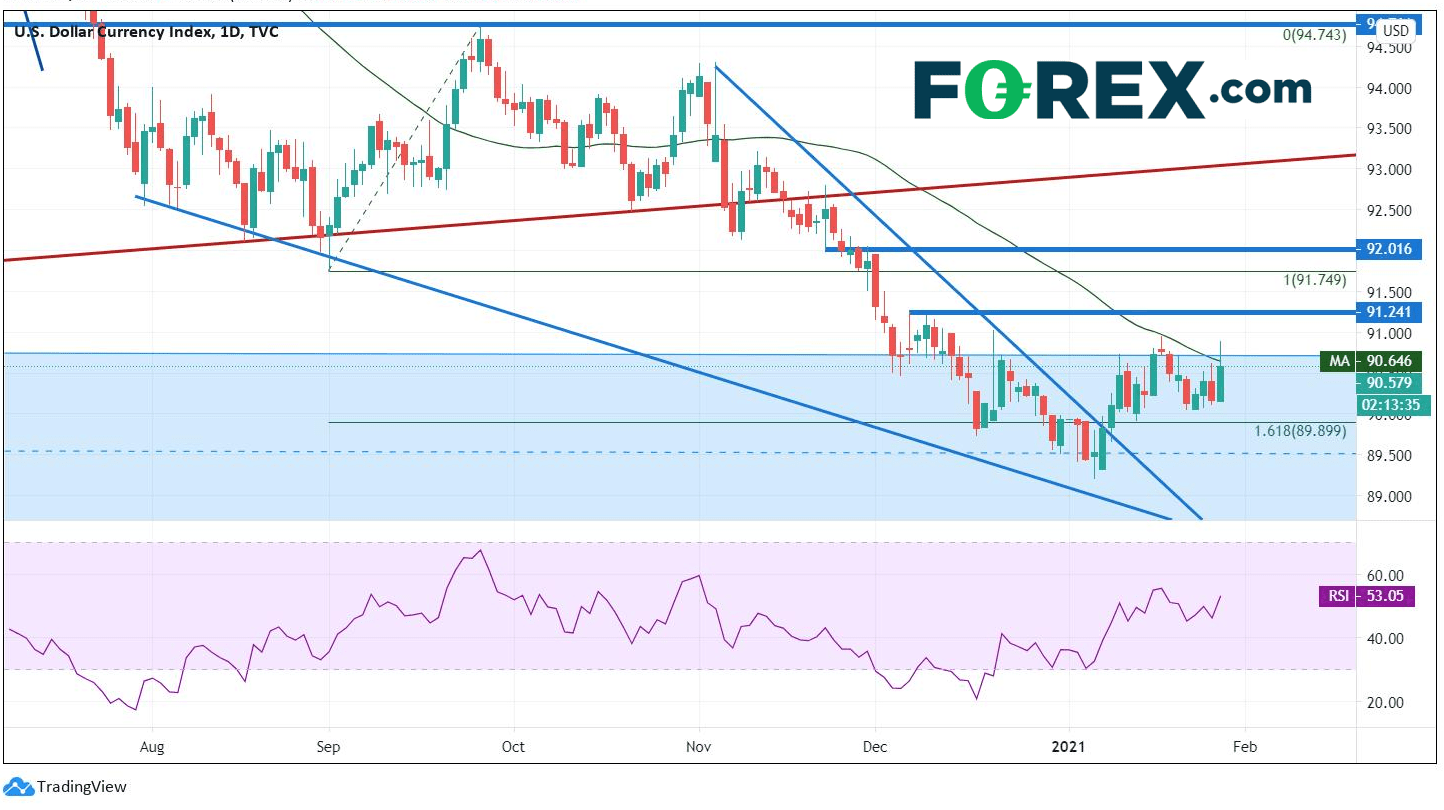 USD/JPY has been moving lower since 2015.  On a daily timeframe the pair has been moving lower in a descending wedge , with a test of the bottom trendline and current low on January 6th near 102.59.  After bouncing off a trendline, one would expect price to try and test the other trendline, currently near 104.45. This level now acts as next resistance and confluences with the 61.8% Fibonacci retracement level from the highs of November 11th, 2020 to the January 6th lows, as well as, the prior highs from January 11th. 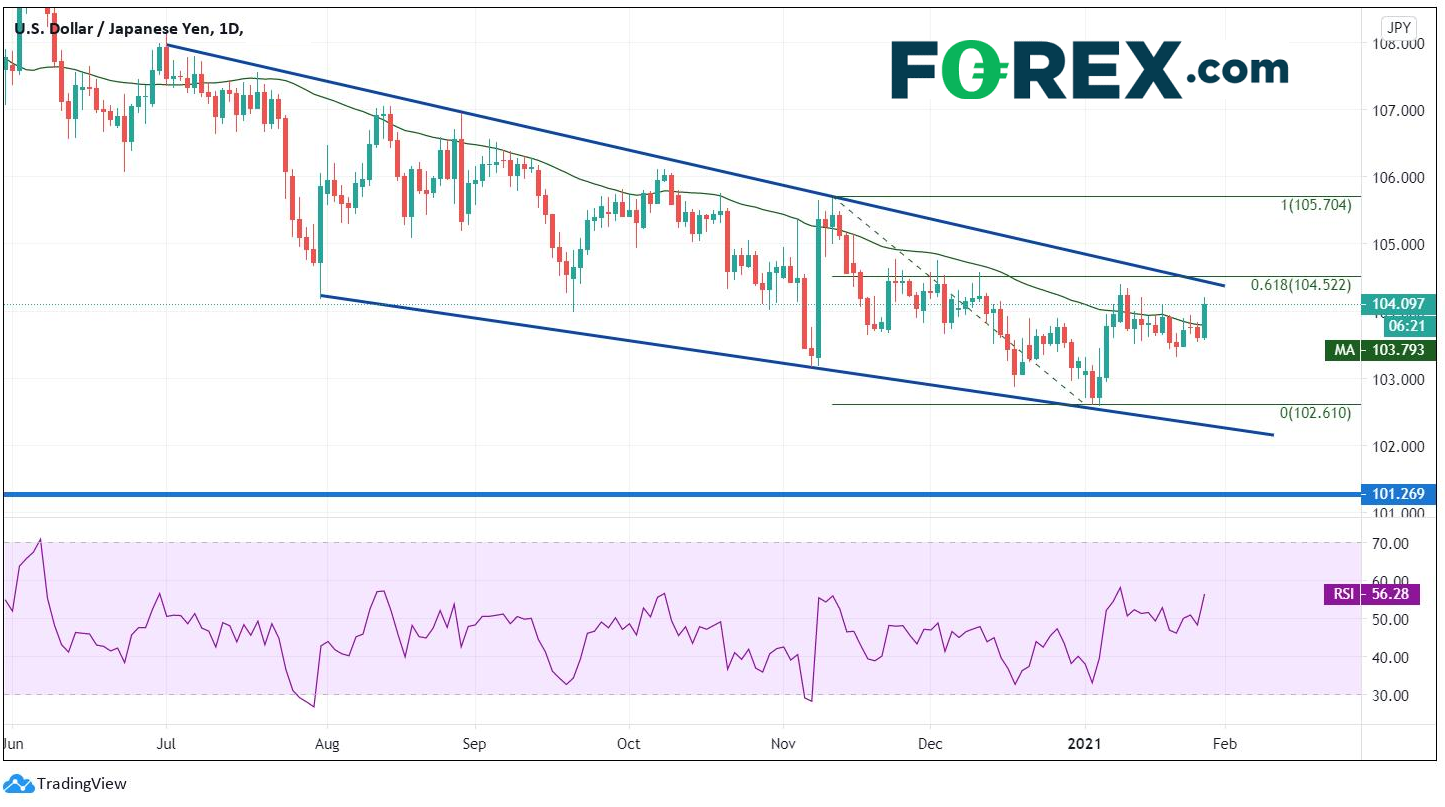 Additionally, on a 240-minute timeframe, USD/JPY price has formed a smaller descending wedge.  After breaking out of the wedge, price action formed a flag pattern, and today, price broke out.  The target for a flag pattern is the length of the flagpole added to the breakout point of the flag, or near 104.80, which confluences with horizontal resistance.   If price is to get there, it must first break through the 104.45 area.  Support is at the top trendline of the flag near 103.75, then the flag lows at 103.35, which confluences with the 61.8% Fibonacci retracement from the January 6th lows to the January 11th highs. 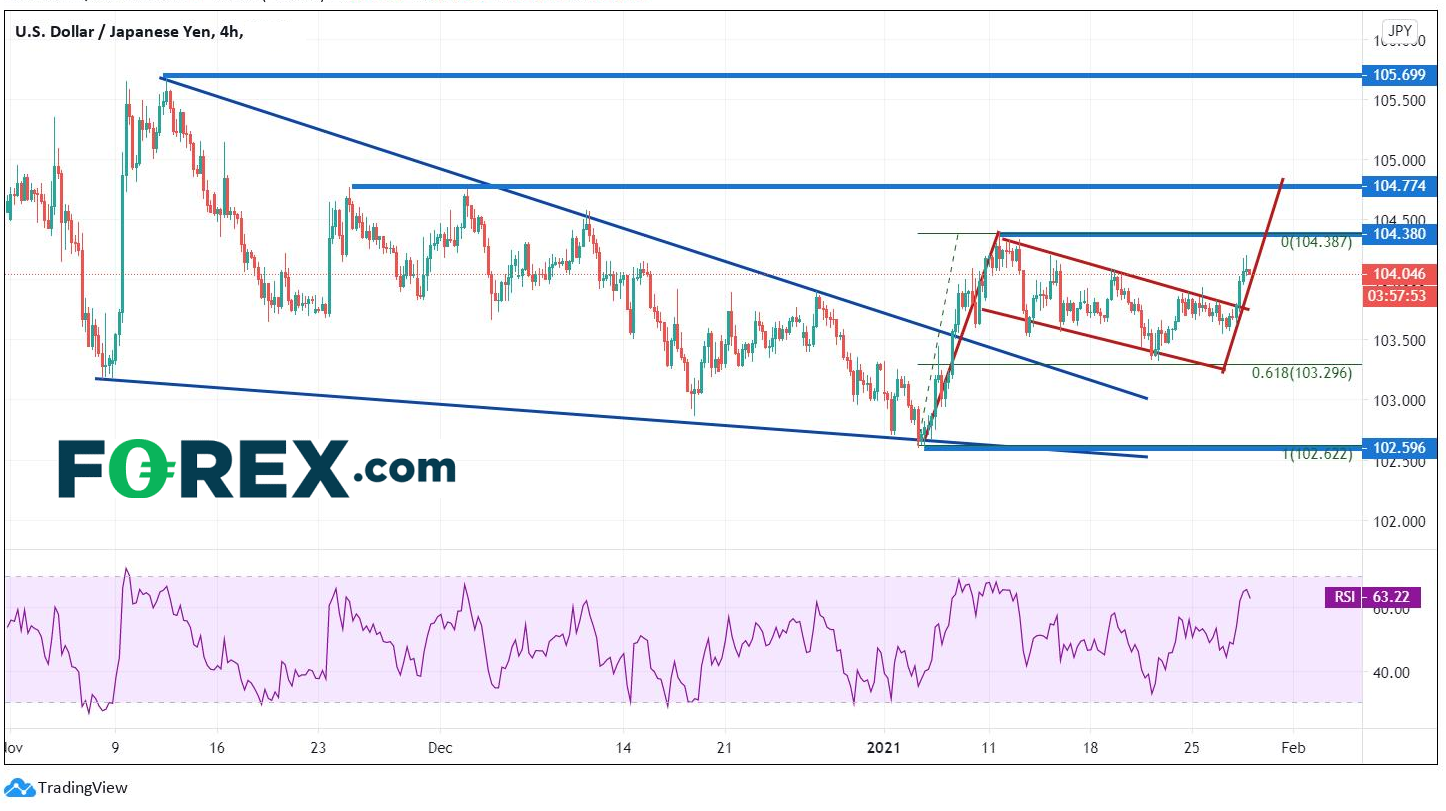 If stock market indices continue to move lower over the next couple of days, traders should expect the US Dollar to move higher.  USD/JPY beats to its own drum at times, however since the pandemic, it has been moving with the DXY.  Therefore, if stocks do move lower, one should look for USD/JPY to continue higher towards the flag target near 104.80, then the descending wedge target on the 240-minute timeframe near 105.70! 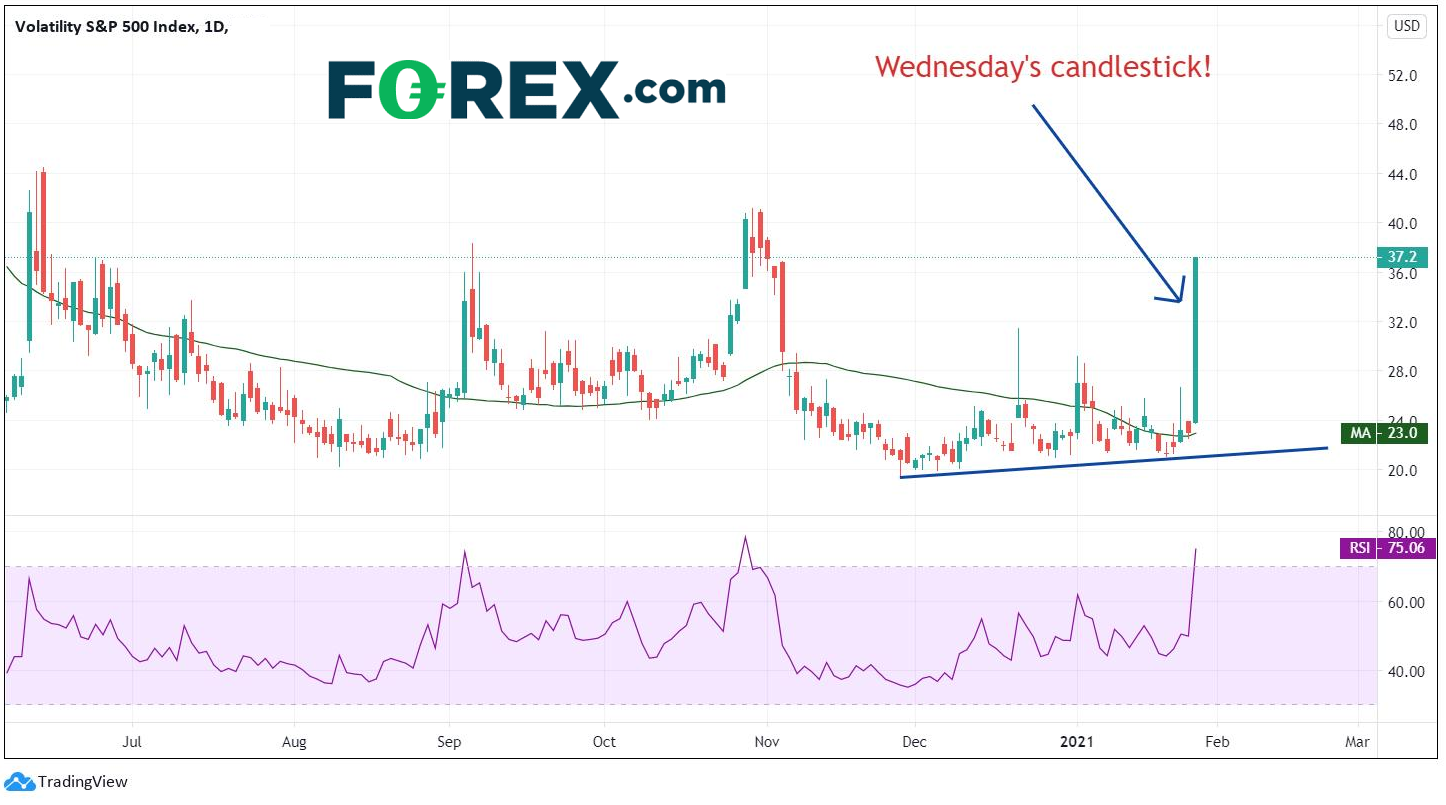