As its name implies, the US Thanksgiving holiday is all about expressing gratitude for the good things in life, and despite (or perhaps because of) 30-year highs in inflation readings, US dollar bulls have plenty to be thankful for this year. After all, looking at the US dollar index, a weighted basket that seeks to measure the performance of the world’s reserve currency against its biggest rivals, the greenback is at its highest level in 16 months!

Fundamentally speaking, this move has been driven by traders pulling forward their expectations for monetary policy “normalization” from the Federal Reserve. While the central bank already announced its tapering plans and most view that as a precursor to the central bank raising rates, the generally strong data that we’ve seen out of the US in the weeks since the last Fed meeting have some traders speculating that Jerome Powell and company could accelerate the tapering process; indeed, this view is increasingly infiltrating even the Fed itself, with Fed members Bostic, Bullard, Clarida, and Waller all seemingly warming to a more aggressive taper.

The hope for dollar bulls is that a more aggressive taper could open the door to an earlier “liftoff” in interest rates. According to the CME’s FedWatch tool, traders are pricing in an 80% chance of at least one hike by the Fed meeting in mid-June 2022, and market is now pricing in the potential for three or more interest rate increases by the end of next year: 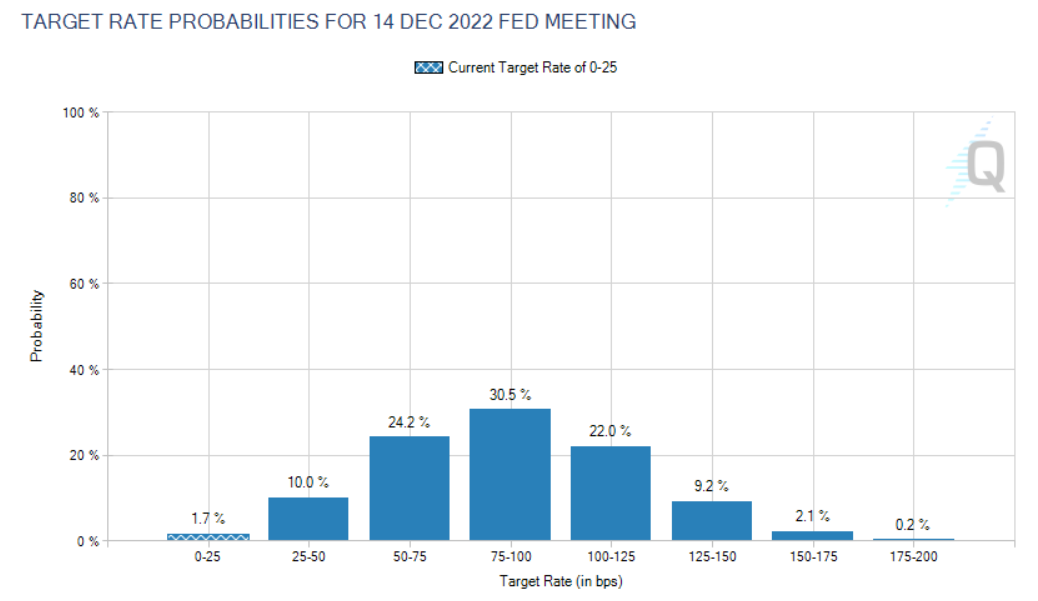 As we noted above, the buck is rising against all of its major rivals so far today, but one of the more interesting pairs is GBP/USD. Cable has been falling within a broader bearish channel for more than six months, with an accelerated bearish channel forming over the last month in particular. As of writing, GBP/USD is hitting a fresh year-to-date low in the lower-1.3300s, but there’s little in the way of meaningful support until the lower 1.3200s, where the lows from Q4 2020 converge with the 38.2% Fibonacci retracement of the entire post-COVID rally near 1.3200.

While continued weakness is the path of least resistance for GBP/USD, there’s at least a chance of a bounce heading into the US holiday to close the week, with the divergence in the 14-day RSI indicator suggesting that selling pressure may be waning. Regardless, traders are likely to look for selling opportunities on any short-term bounces as long as GBP/USD is below resistance in the mid-1.3400s.