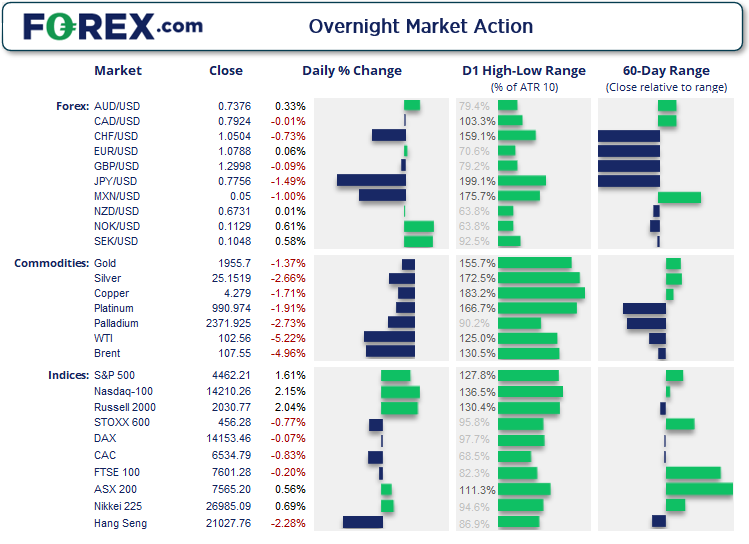 The IMF (International Monetary Fund) cropped their global growth forecast by nearly a full percentage point (ppt), which now sits at 3.6% for 2022 versus 4.4% previously. A sharper deceleration of China and Western sanctions on Russia were cited along with concerns that inflation will be higher for longer.

Fed member Charles Evans now sees a case for at least two 50-bps hikes this year but ruled out the need for a 75-bps hike, which is a hawkish upgrade from the dove who just a month ago didn’t see the need for hikes larger than 50-bps. Yet Raphael Bostic seems less confident the economy will be strong enough to warrant such aggressive hikes and cited the IMF downgrade as a reason to be cautious.

The yen continues to tumble 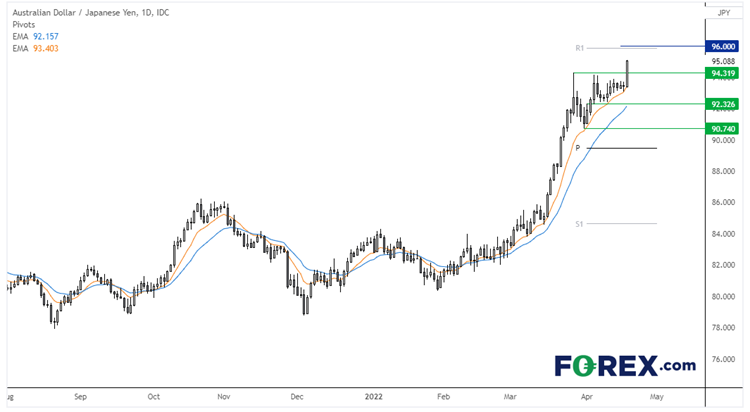 Traders continue to look part verbal interventions from Japan’s Ministry of Finance and push the yen decisively lower. EUR/JPY rose 1.6% to a 6-year high, USD/JPY rose 1.5% to a fresh 20-year high although AUD/JPY was the strongest performer at 1.8% on the day and printed a strong close out of a classic continuation pattern. The breakout of the ascending triangle is a classic bullish setup, but we do question if it looks almost ‘too good’, as sometimes the obvious pattern tend to fail. Either way it is close enough to 96 for bulls to be tempted for a move to that level potentially today.

Word on the street is that 130 is the new line in the sand for USD/JPY (previously 125) and the pair trades less than one day’s ATR from it. We should therefore be cautious on yen pairs as central bank intervention from BOJ (Bank of Japan) can prompt instant and rather unpleasant bouts of volatility.

Lower growth forecasts from IMF weighed on commodities as it reignited demand concerns. WTI is back below $103 after meeting resistance at its monthly pivot point on Monday. The Bloomberg Commodity Index has pulled back from its near 8-year high and metals were also broadly lower. 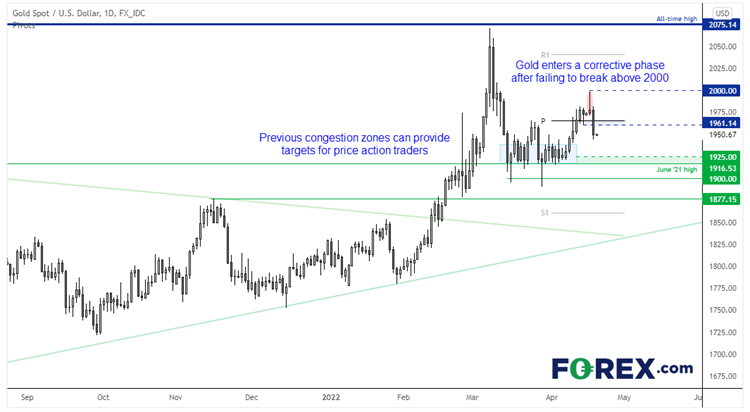 We noted the potential for gold to move lower in yesterday’s video, and it has since fallen to a 6-day low. A bearish pinbar formed on Monday as the metal struggled to hold onto earlier gains when it tried to break above 2,000. Given the importance of this round number, we have confidence in it holding over the near-term. But as fund managers increased their long exposure last week we think the move lower is simply part of a retracement. For now we would like to see prices hold below 1965 (monthly pivot point) and move towards our initial target is around 1925, in the middle of a previous congestion zone.