Is the South African Rand pointing to a new low in Gold?

Below is a chart of USD/ZAR.  The bottom panel of the chart shows the correlation coefficient between USD/ZAR and Gold.  The current correlation on the daily timeframe is -0.94.  A reading of -1.00 is a perfect negative correlation, which means that 2 assets move in opposite directions 100% of the time. A reading of -0.94 is pretty close! 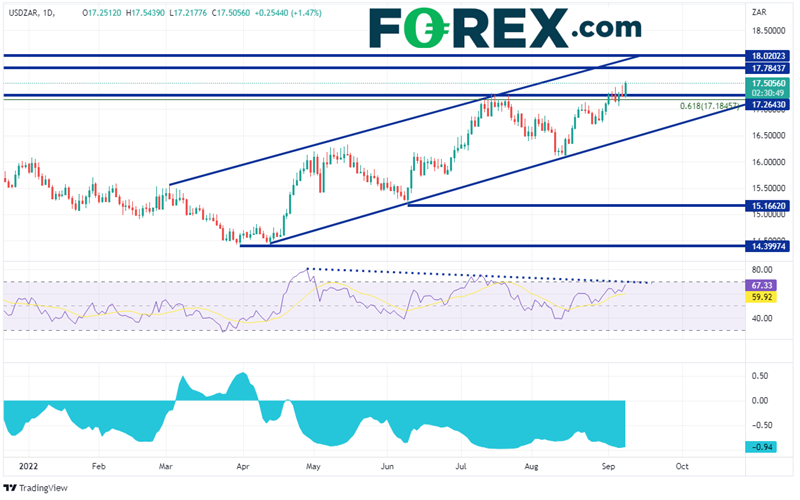 The daily candlestick chart in the chart above shows the price action of USD/ZAR.  The pair has been moving higher in an upward sloping channel since forming a double bottom in early April.  On September 1st, USD/ZAR broke to its highest level since September 28th, 2020 and above the 61.8% Fibonacci retracement level from the highs of April 2020 to the lows of June 2021, near 17.1846.  With USD/ZAR moving to new near-term highs, does this mean that Gold will follow?  However, also notice in the middle panel of the above that the RSI is diverging with price, as the RSI makes three lower highs in overbought territory.  This is an indication that USD/ZAR may be ready for a pullback.

Gold (XAU/USD) has been moving lower in an organized channel since testing the all-time highs at 2075.11 on March 8th. On July 21st, Gold tested the recent low’s of 1670, only to bounce from there. Price traded above the top trendline of the descending channel, only to be stopped at 1807.91 and move lower.  Since then, price has been oscillating around the top trendline of the channel, reaching as low as 1688.84. Is it time for Gold to move lower below 1670?  That level acts as first support.  Not only has that level held after being tested six times since the coronavirus pandemic in March 2020, but it is also the 50% retracement level from the lows of April 2019 t0 the highs in August 2020.  Below there, price can move to the 61.8% Fibonacci retracement from that same timeframe near 1575.30, then the bottom trendline of the channel near 1560.  However, if Gold holds the 1670 level for a seventh time, first resistance is at the highs form August 10th at 1807.91.  Above there, Gold can move the 50% retracement level and the 61.8% Fibonacci retracement level from the highs of March 8th to the lows of July 21st at 1875.71 and 1921.67, respectively. 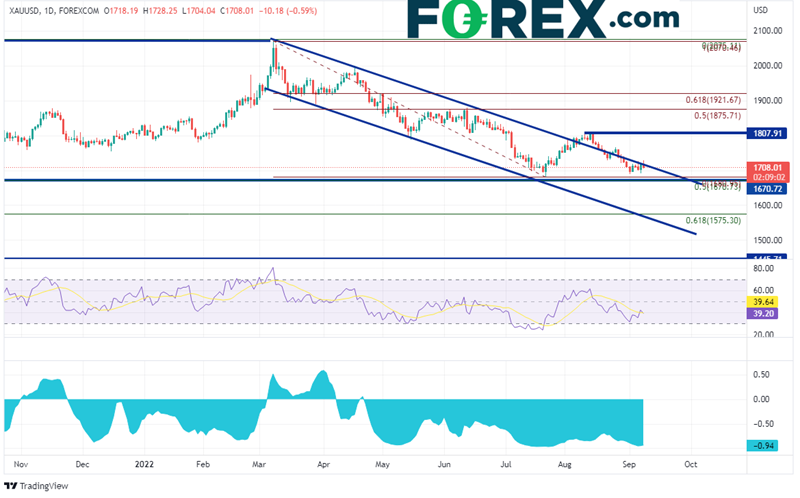 So will Gold finally take out the lows of 1670, which has been tested half a dozen times since the beginning of the coronavirus pandemic.  If USD/ZAR continues to move higher, and if the negative correlation remains strong, then probabilities suggest that it should!