As my colleague Joe Perry noted in his Week Ahead report, Fedwatchers and traders have been looking forward to this week’s Jackson Hole Symposium for months.

See an overview of the key details and themes to watch from this year’s Jackson Hole Symposium below:

What is the Jackson Hole Symposium?

First hosted in 1978, the Jackson Hole Symposium is one of the longest-standing central banking conferences in the world. The symposium draws 140 central bankers, Nobel Prize winners, and top academics from more than 40 countries to idyllic Jackson Hole Montana (though this year’s gathering will be held online due to COVID concerns.

Why is the Jackson Hole Symposium significant?

When is the 2021 Jackson Hole Symposium?

What will markets be watching at the Jackson Hole Symposium?

With the top policymakers from the ECB and Bank of England skipping this year’s event, traders’ focus will be almost exclusively on the US Federal Reserve, specifically any hints about the central bank’s timeline for tapering its asset purchases (so-called “quantitative easing”).

Last week’s FOMC minutes showed a divided committee, and that came before a mix of optimistic (strong NFP jobs report) and pessimistic (poor consumer sentiment, a doubling of US COVID cases) over the last month. Against that backdrop, traders will be eager to see if Powell continues to hint at announcing the Fed’s taper plans as soon as next month’s FOMC meeting, or whether he’ll strike a more cautious tone, potentially prompting traders to push back their expectations for tapering (and ultimately, any potential interest rate hikes.

As we noted at the top of this article, traders have had this date marked on their calendars for months, so there’s at least a chance that Powell strikes a neutral tone and markets fail to see a large reaction. That said, the first place many traders will be looking is at Treasury rates. The short-term 2-year Treasury bond currently yields about 0.23% while the 10-year yield sits at 1.26%; any hawkish (up) or dovish (down) surprise could see a quick move in those rates.

On a related note, the US dollar could also see a strong reaction to any unexpected comments. As the chart below shows, the US dollar index (DXY) is currently pulling back after peeking above previous resistance in the 93.30 area late last week. If Powell implies any taper update will wait until November or later, the greenback could drop further toward its 50-day EMA near 92.50. Meanwhile, a more hawkish hint on taper could see the dollar index break back above the 93.30 zone and potentially continue toward the September 2020 highs in the mid-94.00s next: 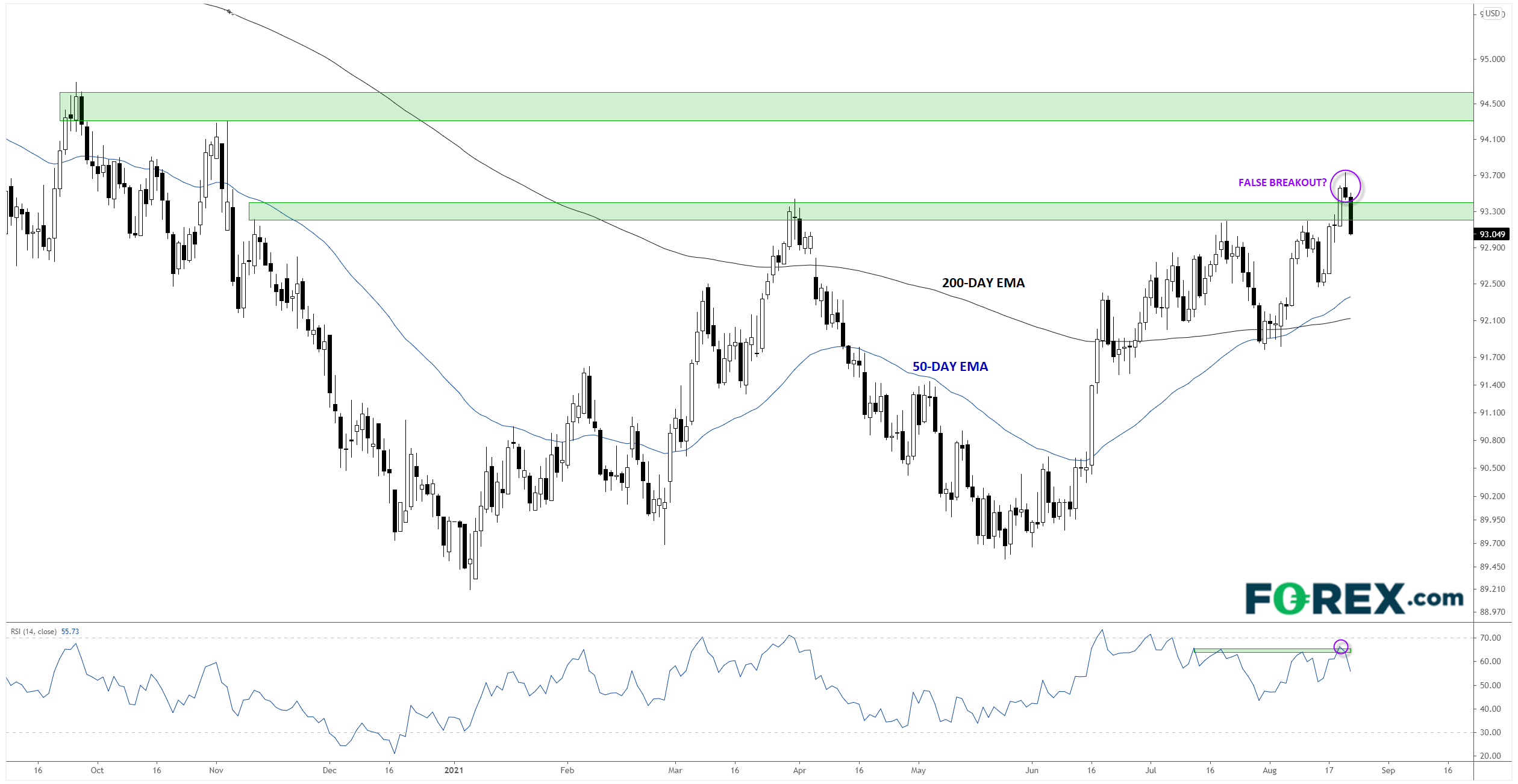