So, the Bank of England has decided to raise rates by 25 bps from 0.75% to 1.00%, as widely expected. The pound has dived nearly 200 pips in the immediate reaction, with the GBP/USD dipping below 1.2400 from above 1.2570 earlier in the day. But all hope is not lost for the pound. In the land of the blind, the one-eyed man is king. Europe faces even more risks than the UK, so the economic fallout may not be as bad as some of her mainland European peers.

What why did the pound fall so much?

Well, when you consider the fact that three MPC members wanted to hike rates by 50 basis points than 25, you would think the pound would rally than sell-off. However, it is worth noting that those three hawks (Haskel, Mann and Saunders) are either external members or leaving, so their votes carry less weight.

The divided MPC thinks CPI will peak above 10% and the economy is facing a very sharp slowdown.

The spilt in votes and uncertainty over inflation and growth puts rate setters in a tricky dilemma. Balancing inflation against growth will be very difficult.

So, the key risk facing the UK is not necessarily tighter policy, but uncertainty over monetary policy and, more to the point, stagflation.

As fears grow that the UK is heading for a contraction in output, amid rising prices domestically and abroad, weak growth in eurozone due to the Russia-Ukraine conflict, and China’s lockdowns, this should keep the pound’s upside limited.

In the short-term, we may see some opportunistic dip buying here and there, although at the time of writing it was still not finding much love, even after this big slide. At last check, the cable was trading at 1.2390.

Is there hope for GBP?

Right now, it doesn’t look that way, but all hope is not lost. The UK is not alone in facing stagflation risks. Other countries in Europe are also facing similar or greater risks, mainly because of Russia’s invasion of Ukraine and the impact this has had on energy and commodity prices. Concerns about supply chain disruptions are global, while China’s slowing economy is going to hurt countries such as Germany even more than the UK. So, what I am getting at is that in the land of the blind, the one eyed could be king. The pound could outperform the euro going forward on a relative basis.

There is also the potential for the UK to weather the inflation storm and avoid a recession, as managing the UK economy is easier than Eurozone.

Beyond the EUR/GBP cross, the pound has been falling for a while now, so it is possible that some of the downside risks are now priced in, or nearly priced in. We need to see a technical sign of a bottom before turning positive on sterling.

The EUR/GBP broke above the 200-day average around 0.8450 in the aftermath of the BoE’s rate decision. If the pound has any chance of a comeback, its best bet would be against a weaker rival such as the euro, as mentioned above. But the Chunnel will need to go back below the 200-day at 0.8450 and hold there on a closing basis either today or in the coming days, to signal that today’s rally was a fakeout. If and when that condition is met, or we see another reversal signal at higher levels, that’s precisely when we would turn bearish on the EUR/GBP. 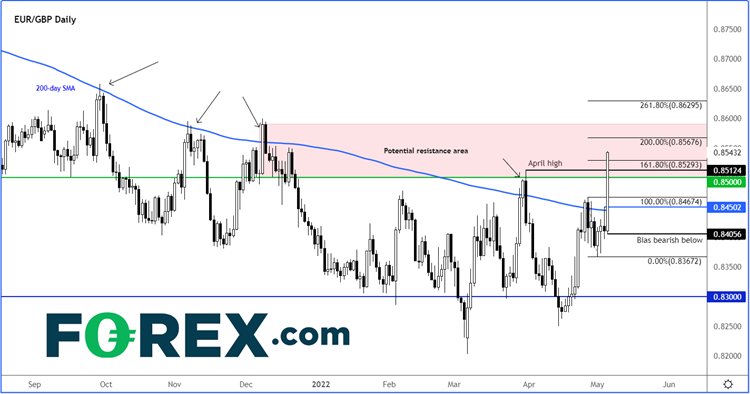 However, if you are feeling bearish towards the pound as a currency, then shorting the pound against a stronger currency would be the way to go, such as against the CAD or USD.