The RBNZ hiked rates 25bps to 1.00% and gave a rather hawkish outlook to its guidance moving forward.  Members raised their guidance for the one-year OCR rate from 2.5% previously to 3.25%.  In addition, the committee said that it will begin reducing bond holdings purchased under the Large-Scale Asset Purchase (LSAP) Program in July by selling 5 billion New Zealand dollars’ worth of bonds per year and by not reinvesting proceeds from bond maturities. See our complete RBNZ recap here.  As a result of the hawkish tone to meeting, the New Zealand Dollar went bid.

GBP/NZD was one currency pair that got hit due to the strong New Zealand Dollar.  The pair formed and inverted head and shoulders pattern during the Fall of 2021 and broke above the neckline of the pattern on December 17th, 2021, near 1.9600.  The target for the pattern is the height from neckline to the head, added to the breakout point of the neckline.  In this case the target was near 2.0475.  Due the expected hawkishness of the BOE, the pair rallied and reached the target by January 28th, making a high of 2.0535 on February 3rd.  The pair has been moving lower since, down over 335 pips in just 2 days. 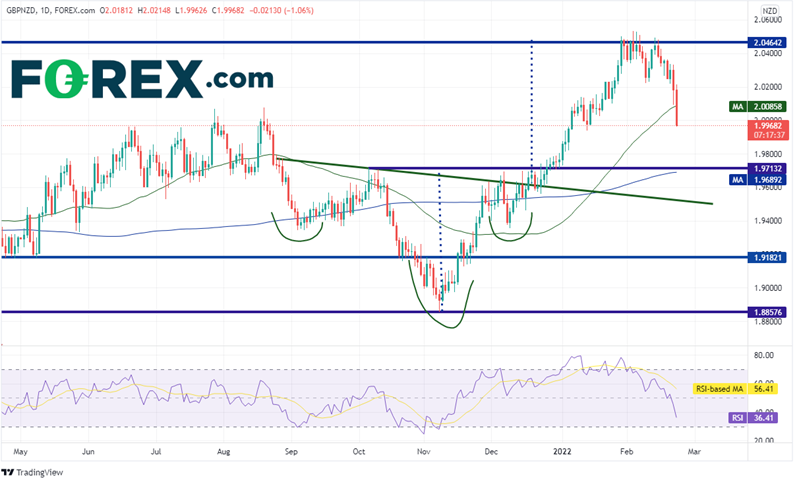 On a 240-minute chart, GBP/NZD is running into support at the 38.2% Fibonacci retracement level from the low of November 8th to the recent highs on February 3rd, near 1.9893.  Below there is a confluence of support at the 200 Day Moving Average (see daily), the 50% retracement of the same timeframe, and horizontal support between 1.9689 and 1.9713.  The 61.8% Fibonacci retracement is next level of support at 1.9496.  However, notice that the RSI is in oversold territory, indicating GBP/NZD may have fallen too far, too fast, and may be ready for a bounce.  First resistance is at the February 22nd highs of 2.0227.  Above there, price can retrace back to the highs of February 3rd at 2.0535. 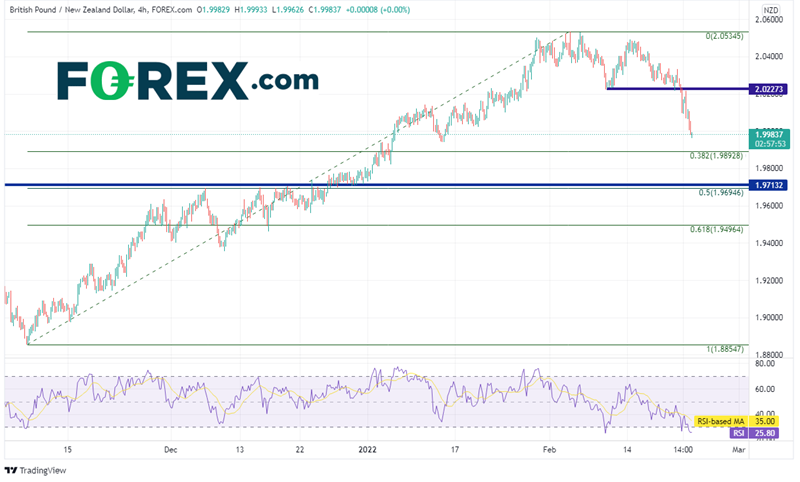 The RBNZ raised rates and continued with its hawkish tone.  As a result, the New Zealand Dollar went bid and dragged GBP/NZD down.  However, the next BOE meeting is on March 17th.  Recall that the BOE was also hawkish at the last meeting on February 3rd, as they nearly hiked 50bps.  Not much has changed on that front.  Watch the Fibonacci retracement levels below current price for possible areas where GBP/NZD may pause or reverse, especially as we get closer to March 17th!