This morning saw US futures extend their losses after a sharp sell-off in European markets. Once again there were no signs of haven support for gold. Bitcoin dropped to $19K and EUR/USD tanked to 1.04 handle.

Why are stocks dropping?

The reason behind the latest sell-off of risk is the same factors that have been prevalent all year round: Surging inflation, interest rate hikes and worries about an economic slowdown. Month- and quarter-end portfolio rebalancing is also adding to the pressure today.

For stocks and other risk assets, the biggest worry right now is stagflation. That is where the global economy is headed, traders believe, and central banks won’t be able to do much about it. If they fasten their belts too tightly, this will hit GDP, while if they loosen their belts again, this will only fuel inflationary pressures further. But they must do something. Given their remit to control inflation, this means more interest rate hikes, even at the cost of economic growth. Indeed, that’s what the Fed’s Powell implied on Wednesday. The BoE’s Bailey also said interest rates might have to rise more profoundly as the battle against inflation continues.

Against this backdrop, it is difficult to justifying buying stocks and that’s why we are seeing support levels continually break down. As before, I maintain my bearish view on the markets, even if they look quite oversold in the short-term.

In Europe, the DAX was down more than 2.5% on the session and testing its lows at the time of writing. It looked like the German index was heading down to its March lows: 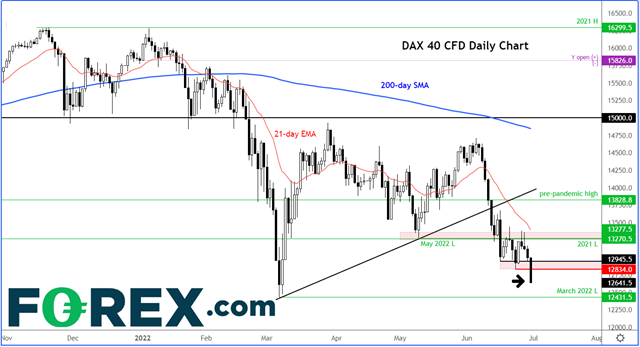 Strong US dollar and rising interest rate expectations continue to weigh on the precious metal, with the metal once again unable to benefit from the ongoing risk aversion in the markets. With gold prices almost back to the same levels as the early parts of 2022, the outlook doesn’t look great – at least for now. Something must change fundamentally to trigger a potential rally. But in the short-term there is the risk we will see further losses as more and more support levels break down. It looks like a revisit of $1800 is likely from here.

Contrary to popular belief, gold hasn’t shown anything to suggest investors view it as a “safe-haven” asset. You would think with growth fears on the rise and inflation anxiety increasing, the metal would be able to put on a strong showing. That hasn’t been the case obviously, with investors dumping everything – from stocks to gold to crypto – in an environment of rising inflation, interest rates and interest rates expectations.

Going forward, I would like to see a confirmed technical reversal signal before turning bullish on gold, as it hasn’t shown any signs to suggest it would stage a recovery with the Fed growing more and more hawkish. As things stand, I think $1800 and potentially lower is on the radar until the time when the Fed’s future rate hikes are fully priced in – possibly late this summer. 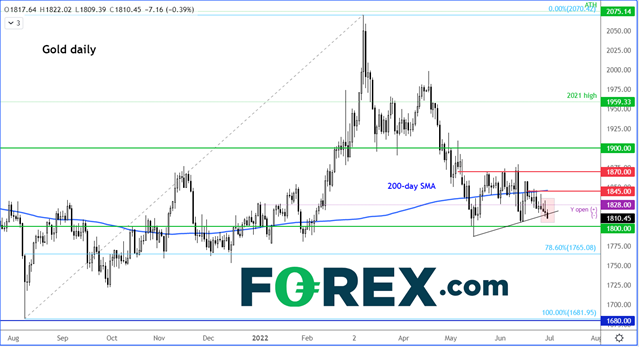 With everything falling, Bitcoin didn’t want to be left out today: 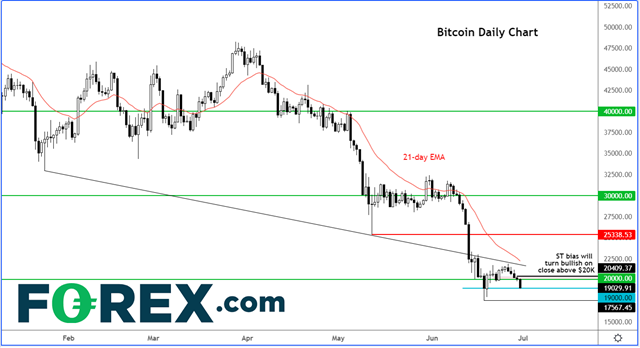 I would be on the lookout for signs of a bullish reversal at these levels. If we go back above $20K handle, and stay there, that could be the signal I am looking for. But for now, the path of least resistance remains to the downside.