Futures markets across Europe are all lower ahead of the open, with US markets initially handing back most of Friday’s gains. Prices have since stabilised and it is possible that, without a new catalyst their provides either a resolution of escalation of war, prices could remain within last week’s range during a week of choppy trade.

However, Asian indices traded cautiously higher because they missed out on Friday’s rally during US hours, so they have effectively met in the middle with the US counterparts. The TOPIX is the best performer with a 1.5% rise, with the ASX in second place and currently up around 0.7%.

The news of fresh sanctions, selected Russian banks being removed from SWIFT and transactions to and from Russia’s central bank more than made its mark on the ruble. Russian citizens are reported to have been queuing up at ATM’s to try and purchase foreign currency all weekend.

The ruble was in freefall as the gravity of sanctions and restrictions on Russia’s central bank took effect. CME futures fell over 30% after the open, which is not what Russian’s who are queuing up at cashpoints across the country want to hear right now. And with Putin hovering his finger over the nuclear button it is difficult to see why anyone with money in Russia right now would want to keep it there right now.

However, the Central Bank of Russia has come out swinging by hiking rates from 9.5% to 20% in an attempt to support the flailing currency. The 11.5 bps hike is the highest single rise on record, and the eight consecutive hike in this cycle which began in April 2021. They also ordered Russian companies to sell 80% of their foreign currency reserves. Furthermore, securities that can be used as collateral for loans have been widely broadened.

GBP/AUD is currently within a countertrend move after hitting a 9-week low on Friday. We noted a head and shoulders pattern on the daily chart last week which projects a target around 1.8360, so we’re now waiting for evidence its current retracement is over for a potential swing trade short. There’s a resistance zone between 1.864/75, so signs of reversal candle below or around that level would be of interest. 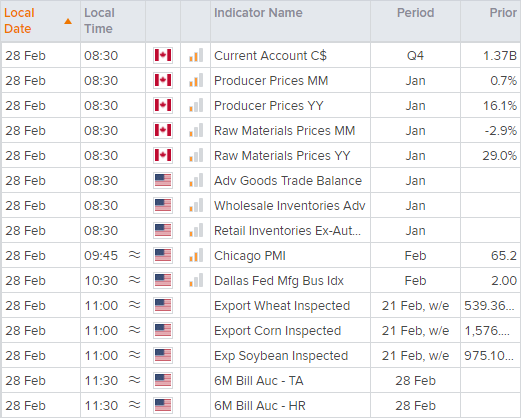