Truss out as UK Prime Minister. What’s next for GBP/USD?

Liz Truss resigned as Prime Minister of the UK on Tuesday, just 44 days after she replaced former Prime Minister Boris Johnson.  She resigns after her failed economic package sent the British Pound to the lowest level ever vs the US Dollar and 30-Year Gilt yields above 5%.  The BOE intervened and saved the economy, but it wasn’t without a cost. GBP/USD is down over 2.5% since Truss took over, however there was plenty of volatility in between as it traded between 1.0357 and 1.1738 over that period.  The FTSE also has lost nearly 5% during her tenure.  For a complete run down as to how the next Prime Minister will be selected, see my colleague Rebecca Cattlin’s preview here.

GBP/USD has been moving aggressively lower in an orderly downward sloping channel since April 22nd, when the pair broke below 1.3000.  On the day that former Chancellor Kwasi Kwarteng announced the now infamous “mini-budget”, GBP/USD broke the bottom trendline of the channel and traded from a high of 1.1274 down to 1.0834.  The markets assessed the situation over the weekend and determined that the budget was worse than initially thought.  GBP/USD reached a low of 1.0357 as the BOE entered and saved the bond market.  Over the next 6 trading days, the pair bounced to the 61.8% Fibonacci retracement level from the highs of August 10th to the lows of September 26th near 1.1500. Since then, markets have been oscillating between 1.0930 and 1.1495. 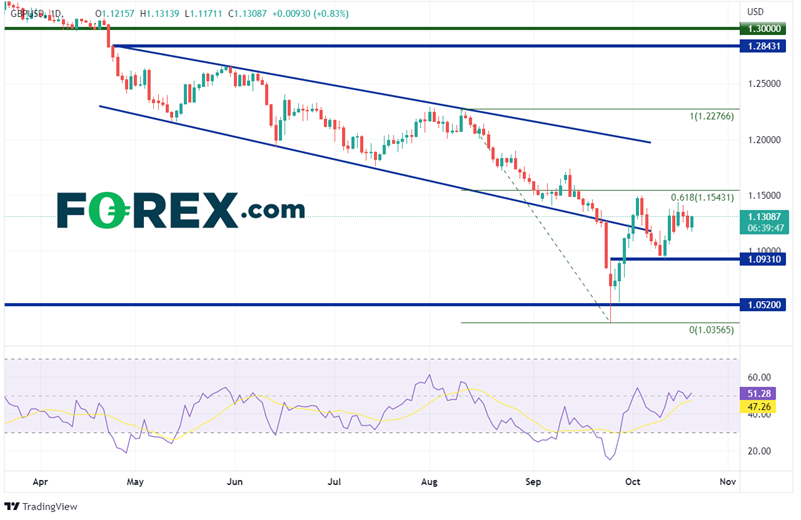 Given the reaction to the news that Truss would resign, the market seems to have priced in the possibility of this event happening.  On a 30-minute timeframe, GBP/USD was heading bid into the announcement from a low on the day at 1.1171 to a high just before the announcement at 1.1290.  However, as the announcement was made, price spiked to 1.1305 and traded lower during the next 30 minutes to 1.1250.  Buy the rumor, sell the fact.  (GBP/USD traded higher later as the US Dollar was selling off). 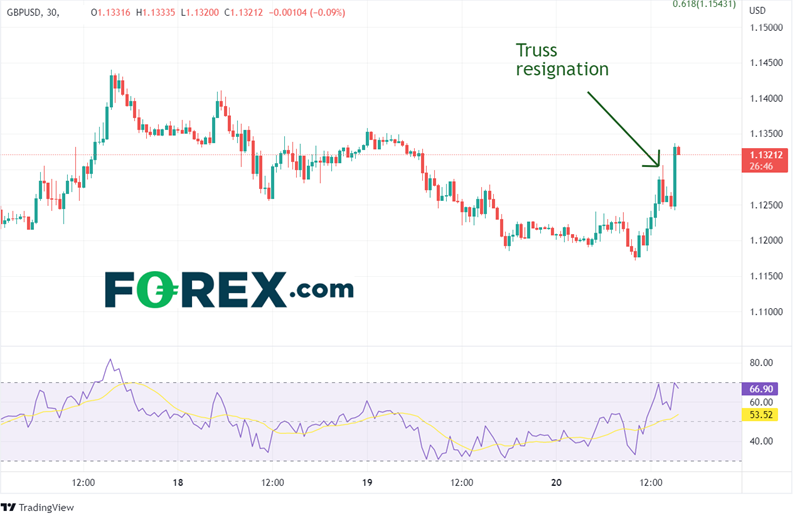 What happens next to the Pound may not depend so much on who the next PM will be, but rather what the Bank of England does at its next meeting. The new PM will surely not make the same mistakes as Truss did with her economic plan.  Therefore, the focus will turn back to Monetary Policy.  The Bank of England meets again on November 3rd.  With inflation at 10% and the current cash rate at 2.25%, markets are expecting a rate hike between 75bps and 125bps!  GBP/USD should move higher into this announcement.  The pair has recently broken sideways out of a flag pattern; however, it is still valid as long as it doesn’t trade below 1.0930.  The target for the flag is near 1.2075.  If GBP/USD is to get there, it must first pass through prior highs on October 4th at 1.1487 and the 61.8% Fibonacci retracement level from the daily timeframe at 1.1543.  Above there, horizontal resistance is at the highs of September 13th at 1.1738, then the flag target near 1.2050.  However, if the resistance holds and price moves lower, the first support is at 1.1152 then the flag lows near 1.0931. Below there, GBP/USD could fall all the way back to the all-time lows at 1.0357. 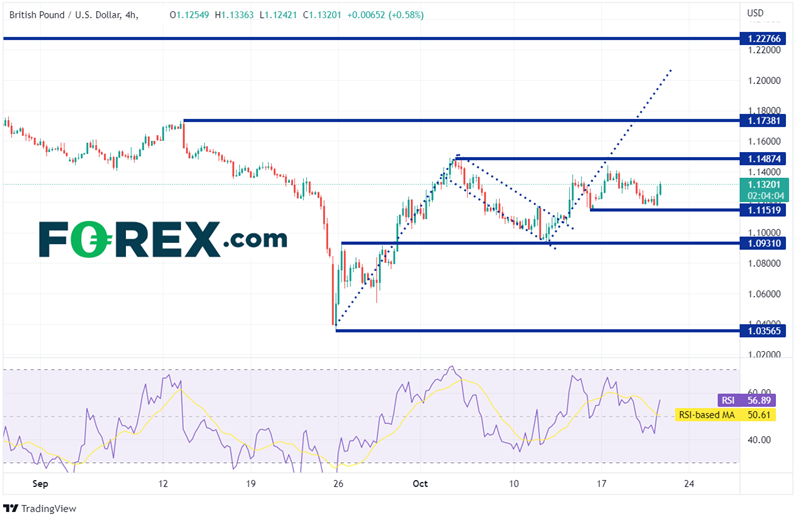 Liz Truss is out as Prime Minister of the UK.  Whoever is selected as the next PM surely will not make the same economic mistakes that cost Truss her job.  Therefore, the focus for the Pound will turn back to the Bank of England.  How much will the BOE hike when it meets on November 3rd.  Could it be as much as 125bps?  If the markets believe that the BOE will be hawkish heading into the meeting, watch for the possibility of GBP/USD to head higher!