US CPI preview: Will price pressures finally start to slow?

The battlelines are drawn and the two sides are arrayed for another week of intense conflict.

No, we’re not talking about the ongoing military conflict between Russia and Ukraine (though that may be playing a role as well). Instead, we’ve seen a clear divergence emerge between the Federal Reserve, which just last week implied that it would only take a couple more 50bps (0.50%) rate hikes this summer to rein in inflation, and traders, many of whom are still calling for a 75bps (0.75%) increase as soon as next month.

One of the biggest flashpoints in this battle will be the monthly inflation reports. Put simply, if inflation continues to accelerate, markets may force the Fed to raise interest rates more aggressively, while fading price pressures would suggest that a couple more 50bps rate hikes and an end-2022 rate in the 2.50-3.00% range could be sufficient.

Against that backdrop, the US will release its closely-watched Consumer Price Index (CPI) report on Wednesday. Traders and economists are expecting the headline inflation figure to come in at +0.2% month-over-month, down sharply from the +1.2% m/m reading we saw in April. The year-over-year rate is expected to fall to 8.1% from last month’s 40-year high of 8.5%. If inflation prints at expectations, it would be the first meaningful decline in the annualized inflation rate since the depths of the COVID recession: 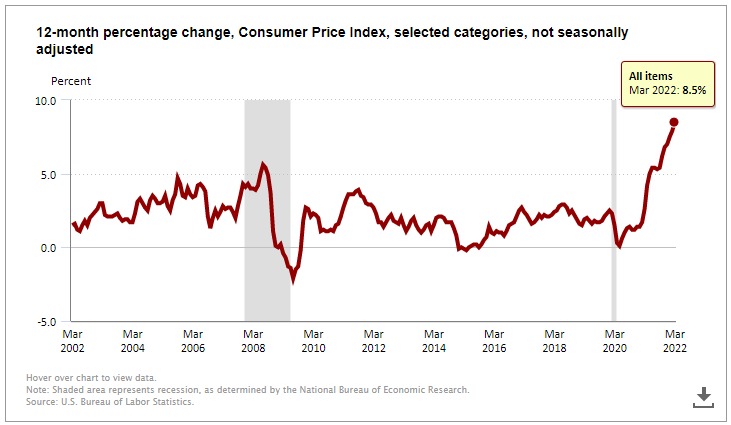 In terms of the components of CPI, oil prices reversed a portion of the big March surge in April, but gas prices nonetheless remained above $4.00. Food prices will likely remain elevated on the back of rising input, labor, and transportation costs. Indeed, labor shortages (and the accompanying upward pressure on wages) are likely to be a theme for months to come.

Outside of the more volatile food and energy prices, used car prices have seemingly peaked and falling prices in that product category alone could account for a nearly 0.4% decline in the headline CPI reading according to some analysts. Nonetheless, price pressures have grown more widespread in recent months, with global supply chain disruptions and tight labor markets throwing cold water on those who thought inflation would dissipate of its own accord.

Among all global central banks, the BOJ is arguably the most dovish (and has been for years) whereas the Fed is among the most hawkish, so it’s no surprise that USD/JPY has been on a tear in recent weeks

If inflation comes out hotter-than-expected (pointing to an even wider monetary policy divergence), the pair could extend its gains within its well-defined near-term bullish channel. Meanwhile, a soft inflation report could break said channel, though it would take a break below last week’s low near 128.60 to shift the near-term bullish bias back to neutral: