This week’s most eagerly-anticipated macro event is the June US Consumer Price Index, which is due to come in at 13:30 BST (08:30 EDT).

Inflation has been a hot topic in the markets with price pressures in the US and around the world rising to levels not seen in decades. As a result, the Fed and other central banks have been forced to tighten their monetary policies sharply, causing all sorts of volatility in asset prices.

With the US being the largest economy in the world, what matters here is not only important for the dollar, but the rest of the world too.

What are analyst expectations about US CPI?

Annual CPI is expected to have accelerated to 8.8% in June from 8.6% in May. On a month-over-month basis, CPI is seen rising by 1.1% on the month following a 1.0% rise the month before.

Core CPI is seen rising by 5.7% in June, which would actually be weaker than 6% recorded in May. On a monthly basis, core CPI is expected to have risen by 0.6% again as it did in May.

How will the dollar react to US CPI?

If expectations are met or beaten, then this should keep the dollar on the front-foot especially against currencies where the central bank is still relatively more dovish. The EUR/USD could break parity and the USD/JPY could climb towards 140.

So far, US CPI has been on a relentless rise with prices only easing a little in April, before resuming higher:

The 8.6% reading in May was the highest inflation print since December 1981. One of the biggest contributors to inflation in May was energy prices rising nearly 35%. Given that oil prices have remained elevated since, don’t expect this source of inflation to have cooled. In May we also saw food costs surge more than 10%, which was the first increase of 10% or more since March 1981.

More recently, though, there’s been some talk of peak inflation in the US due, among other reasons, to a fall in some agriculture food prices. After all, it was the soaring prices of wheat, corn and other soft commodities, as well as energy, that have boosted inflation so much over the past year or so. With these prices coming down a little, this is clearly some good news – and some light at the end of the tunnel. 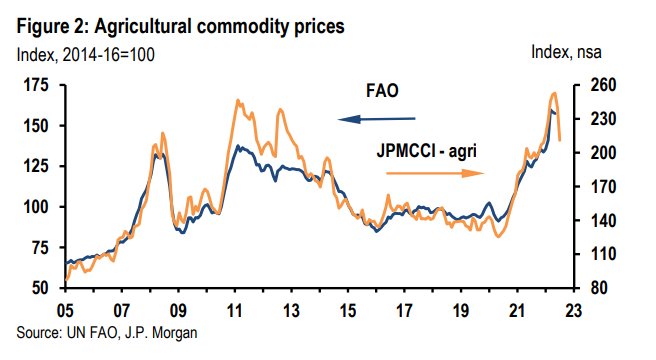 The chart above from JP Maorgan, shared by Bloomberg, shows two indices of food prices. The UN Food and Agriculture Organization’s (FAO) food-price index dropped for a third straight month in June. The other index is that of agricultural commodities compiled by JPMorgan. By early July, it was down about 10%, mainly because of the drop in wheat prices.

Based on the above, it is possible we will see weaker inflation data going forward. But June might come too soon for the impact of slightly lower agricultural prices to have been passed through onto the consumer.

So, just like May, there is a risk that inflation could overshoot again. If so, this will likely trigger fresh gains for the dollar.

Which currency pairs to watch?

Investors are spoilt for choice when selecting the best dollar pair to trade US CPI. They have continued to bid up the dollar at the start of this week, with the greenback rising sharply against most currencies ahead of the publication of US inflation report on Wednesday. The yen and euro have been hit the hardest, with the former dropping to its weakest level since 1998 and the latter the lowest since 2002 against the greenback. Antipodean currencies, the British pound and nearly all emerging market currencies have given way for the dollar. The GBP/USD reached its lowest level on Tuesday since the pandemic, as it nearly reached the 1.19 handle.

For those wishing to express bullish views on the dollar, then looking for long setups on the USD/JPY or short setups on the EUR/USD make the most sense. If you feel the dollar is going to drop, then the USD/CAD might be the one to look for short setups on, given the strength of the Canadian dollar and oil prices. The BoC is also set for a aggressive 75-basis point hike on Wednesday.

Can EUR/USD drop below parity?

The EUR/USD hit parity on Tuesday before staging a short-covering bounce ahead of the CPI data.

If the EUR/USD holds its own above parity after the US CPI is released, then it may stage a more meaningful comeback ahead of  next Thursday’s European Central Bank rate decision, where Christine Lagarde and her ECB colleagues will hike rates for the first time since 2011.

But the risks remain skewed to the downside.

My colleague Tony Sycamore has informed us that there is significant optionality (barriers) at parity. In the event of a stronger US CPI print, "options desks are likely to be short vega/gamma 97-95 region, which means their delta hedging would throw fuel on the fire of a stronger USD on a break of parity." 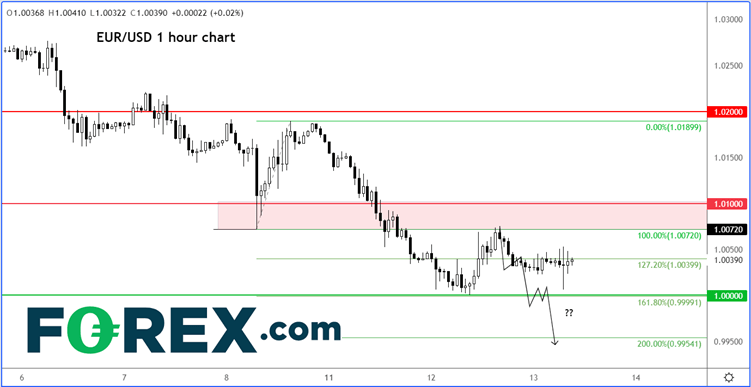