On Wednesday, the FOMC hiked rates by 50bps to 4.5% and said that it will not begin to lower rates until they are sufficiently restrictive and the FOMC is confident inflation is moving towards 2%. Market movement was relatively small for a hawkish FOMC.  On Thursday, the Bank of England hiked rates 50bps as well to bring its borrowing rate to 3.5%.  BOE Governor Bailey said that the MPC’s latest projections suggest CPI has reached its peak, however it is expected to remain “very high” in the coming months.  As a result, forward guidance suggests more hikes will follow. The ECB also hiked 50bps to raise its deposit rate to 2.0%.  During the press conference that followed, ECB President Christine Lagarde said that it’s “obvious that we should expect 50bps hikes for a period of time”.  EUR/USD went bid by 100 pips!

US stocks had been moving lower overnight and the US Dollar had been going bid. The US Dollar Index moved aggressively lower before the US stock open as EUR/USD spiked higher on Christine Lagarde’s comments.  However, it wasn’t until the US stock market open that stocks picked up steam to the downside and the DXY regained an aggressive bid.  The reason for the dramatic moves after the US stock market open had more to do with the US data dump than it did the central bank meetings.

All the US data releases on Thursday were all weaker than expected.  In the recent past, markets may have viewed this as a positive for the markets, hoping it would slow down the Feds pace of rate increases.  However, with the dot plots showing a 5.1% terminal interest rate, the Fed says it still has some work to do hiking rates.

Below is a 15-minute chart of the US Dollar Index (DXY).  Notice that when the US stock market opened, the DXY took off after US stocks began to plummet.  The EUR/USD move on the hawkish Christine Lagarde comments was completely reversed within an hour. 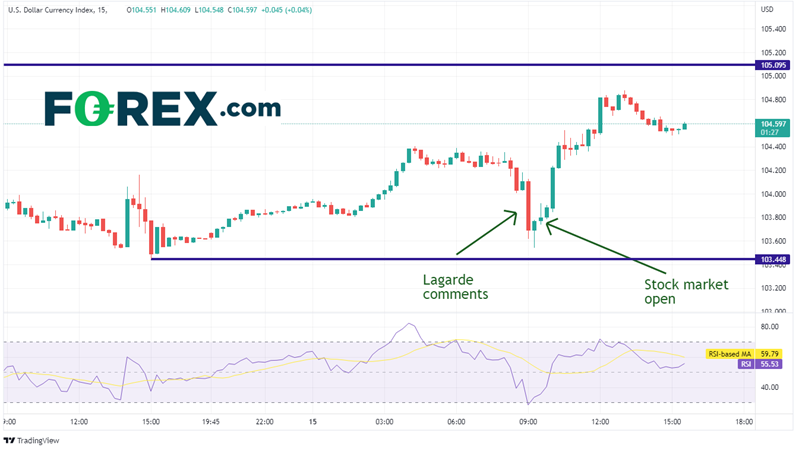 Check out EUR/USD as well: 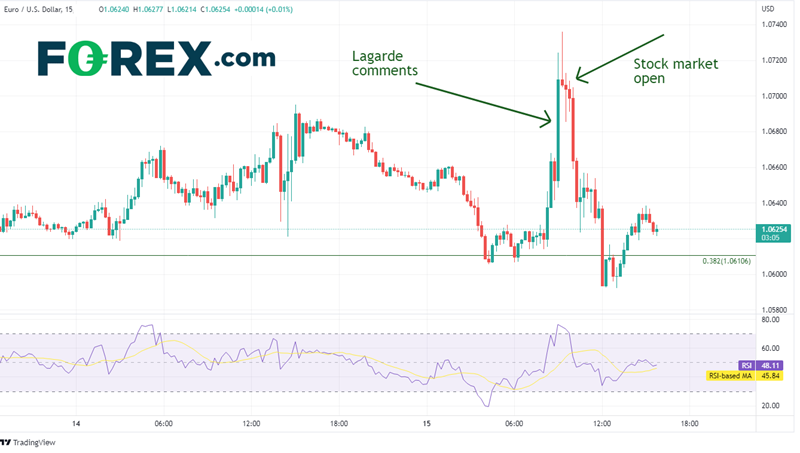 
EUR/USD has been moving higher since making lows on September 28th at 0.9536.  The pair has been moving in an ascending wedge formation.  Price reached the apex but continued to move higher.  Today, EUR/USD stalled at the 61.8% Fibonacci retracement level from the highs of the year in February to the lows of the year in September near 1.0747. Today’s candlestick was also a bearish engulfing pattern, suggesting more downside to come.  First support is at the lows of December 7th at 1.0455.  Below there, price can fall to long-term support between 1.0349 and 1.0366.  The next level of support is at the lows from November 21st near 1.0223.  However, if EUR/USD continues higher, first resistance is at the previously mentioned 61.8% Fibonacci retracement level of 1.0747, then horizontal resistance at 1.0787 and 1.0936. 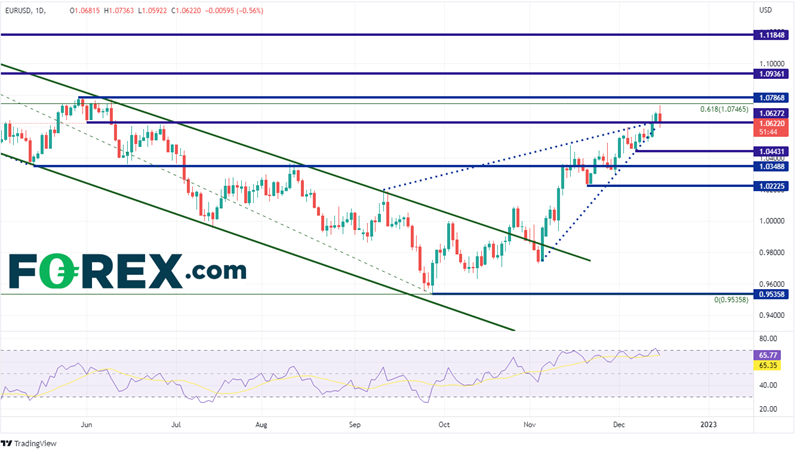 Is a recession ahead for the US?  It will take time to find out.  However, with Thursday’s poor economic data and the Fed still hiking rates (albeit at a slower pace), a recession may be in the cards for the US!