US dollar finds only mild support from ISM, factory orders

By :
Fawad Razaqzada
,  Market Analyst
The US dollar and stock indices managed to gain further ground after a stronger ISM services PMI report for July pointed to a favourable mix of slowing inflation and some growth momentum. But it looked like investors were reluctant to open any bold positions ahead of NFP on Friday, keeping the dollar’s gains somewhat contained. There were also some negatives in the data that discouraged the dollar bulls. Among the dollar pairs, GBP/USD was near the session lows, testing the key 1.21 handle ahead of the Bank of England rate decision on Thursday.

The headline PMI print of 56.7 was easily better than 53.5 expected and marked an improvement from 55.3 recorded in June. What’s more, some of the sub-indices were quite decent too, with strong improvement observed in new orders (+4.3), for example. Separately, Factory Orders came in stronger at 2% month-over-month when 1.3% was expected.

But there were a few parts of the ISM report that still highlighted elevated risks of recession, while the S&P Global US Services PMI – contrary to the ISM – remained in contraction, at 47.3 compared to 52.7 in June. According to the ISM survey, “interest rates have significantly impacted the homebuilding market. Cancellation rates have increased, as homebuyers can no longer afford the monthly payment. Traffic to our communities is down. Inflation has side-lined many would-be buyers.” What’s more, responds in Management of Companies & Support Services “can feel the economy weakening. Clients are making appropriate moves in anticipation of a recession.”

Perhaps another reason why US dollar bulls were not going gung-ho about the ISM was the fact there was good news on the inflation front, with the Prices Index decreasing for the third consecutive month, down by a good 7.8 points to 72.3. Crude oil prices were also weakening at the time of writing, which was further disinflationary.

At the time of writing, the GBP/USD had dropped to rest key support around 1.2100. Here, the cable was testing the support trend of its newly-established bullish channel. I imagine FX traders would be reluctant to push rates below this area meaningfully with the Bank of England rate decision coming up on Thursday. So as a minimum I would expect to see a bounce here. 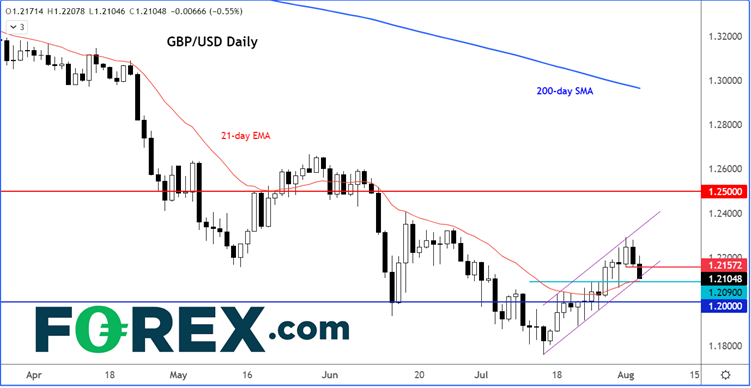