All eyes were on the PPI print this morning, as it offered one last inflation data point for the Fed to use when determining whether it should hike rates by 50bps or 75bps.  (See our FOMC Preview here).  However, the results of the print didn’t provide the markets with any new clues to help decide which it will be.  US May PPI was 10.8% YoY, a tick under expectations and unchanged from April’s print.  In addition, the Core PPI for May came in lower than consensus at 8.3% YoY vs 8.6% YoY expected and 8.8% YoY in April.  The Core measure, which excludes food and energy, shows that although the 10.8% headline print is high, much of the PPI inflation is from the Core.

USD/JPY has been on a mission since the beginning of June to take out the 135.00 level, and yesterday, price reached a high of 135.19.  The pair had been in an uptrend since early March when it turned higher and reached a near-term high of 130.81 on May 9th.  USD/JPY then pulled back in a descending wedge formation and held about the 50 Day Moving Average near 126.31.  At the end of May, the pair broke out of the descending wedge pattern and continued on its way higher to 135.19 yesterday, taking out multiple Fibonacci levels and horizontal resistance levels along the way.  The pair is trading near its highest levels since 1998! 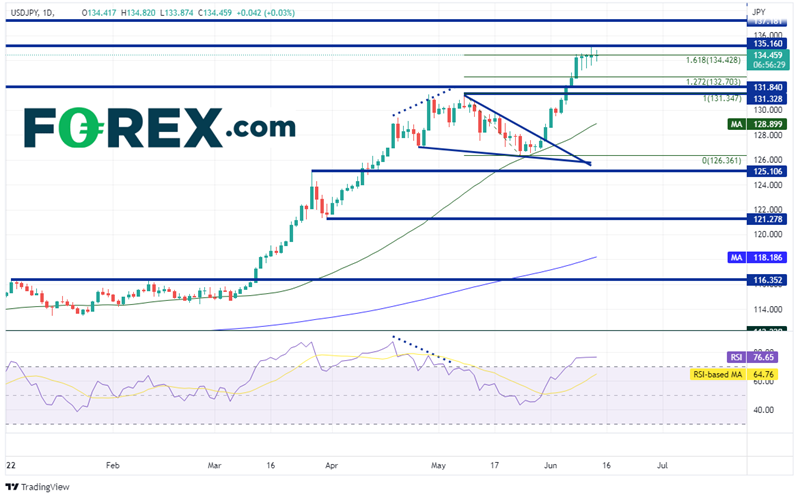 On a 240- minute timeframe, USD/JPY has pulled back from yesterday’s new highs in a symmetrical triangle, as Japanese officials talked down the exchange rate.  However, price only pulled back to 133.59 and has been trading within the triangle pattern since. First resistance is at the top, downward sloping trendline of the channel near 134.67.   Above there, the pair can move back to the June 13th highs at 139.19.  The next level of resistance isn’t until horizontal resistance dating to 1998 at 137.43. However, if the pair turns lower (i.e., less hawkish FOMC or more jawboning from Japanese officials), the pair could move lower.  First support is at the bottom, upward sloping trendline of the pattern near 133.85, then the lows from June 13th at 133.59.  Below there, price can fall to the 38.2% Fibonacci retracement level from the lows of May 9th to the highs of June 13th, near 131.90. 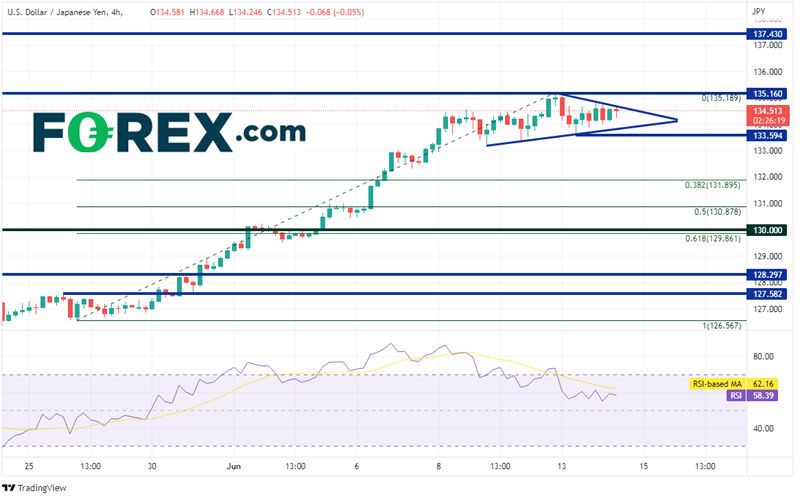 With PPI providing no further guidance to help markets decide if the Fed will hike rates by 50bps or 75bps, USD/JPY is trading in a tight range today.  The pair has been trading more with US rates and the US Dollar lately, rather than following stock indices lower. Therefore, if the Fed hikes 75bps or is hawkish, watch for USD/JPY to continue higher.  However, if the Fed only hikes 50bps or is less hawkish, the pair may pull back.  Until then, it seems markets may be in waiting mode.