The Federal Reserve’s Federal Open Market Committee (FOMC) meets on June 14th and 15th, with the statement scheduled for release at 2:00pm ET on Wednesday June 15th and the accompanying press conference with Fed Chairman Jerome Powell scheduled to start at 2:30pm ET.

What are traders expecting from the Fed? 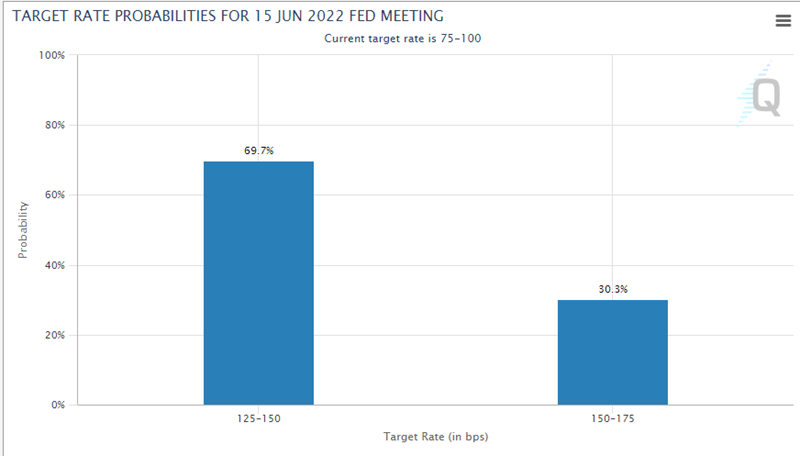 The blackout period for Fed speakers to discuss Monetary Policy began last weekend.  Until then, both the hawks and the doves were on the wires talking generally about how interest rates will be increased by 50bps at the week’s meeting AND the July meeting.  However, that was before the May CPI and June Michigan Consumer Sentiment Index were released on Friday.  The headline CPI print was 8.6% YoY vs an April reading of 8.3% YoY, the highest since December 1981. In addition, the Michigan 5 Year Inflation Expectations Index for June jumped from 3% to 3.3% and the 1 Year Inflation Expectation increased from 5.3% to 5.4%.  Since June 6th, markets increased the probability of a 75bps increase at this week’s meeting from 3.1% to 30%!

On May 18th, Fed Chairman Jerome Powell said that getting inflation down may come at the expense of the 3.6% Unemployment Rate.  On June 3rd, the US released another robust Non-Farm Payroll print of +390,000 vs an expectation of +325,000.  The Unemployment Rate remained unchanged from April at 3.6%.  With inflation continuing to increase, and the Unemployment Rate at its lowest since February 2020 (the month before the pandemic hit the United States), is it time for the Fed to surprise the markets and hike rates by 75bps, risking an uptick in the unemployment rate?

If the Fed does hike by “only” 50bps, eyes and ears must be kept on the Fed statement and press conference for a hawkish tone.  Will the FOMC hint that it’s possible for the Fed to hike rates by 75bps at the July meeting?

In addition, the FOMC will release forecasts on interest rates (the dot plots), inflation, and growth.  Traders will be watching to see how much the Committee expects to raise rates over the course of the rest of the year.  Expect them to raise their interest rate forecast from the last meeting.  Markets are currently pricing in roughly a 250bps increase before year end.  In addition, Committee members are likely to revise inflation forecasts higher in the short-term and lower in the long-term as they try and “front-load” interest rate increases to stem rising inflation.  This should, in turn, cause them to lower growth in the near-term.

Could this turn out to be a “Buy the rumor, sell the fact” event for the US Dollar?  Last week, the ECB announced that it would end QE purchases on July 1st and hike rates by 25bps in July.  However, that wasn’t enough for the markets as they were left to wonder what the ECB would do if the Eurozone began to fragment.  In such a situation, peripheral country yields would rise faster than the core country yields, which could lead to another debt crisis.   Therefore, the Euro sold off and the US Dollar went bid.  On Friday, the DXY continued higher on the inflation data.  Finally, on Monday, the US Dollar Index continued higher on fears that the Fed may indeed hike 75bps.  Price moved from a low on Thursday of 102.15 to a high on Monday of 105.10, just above the May 13th high of 105.00. 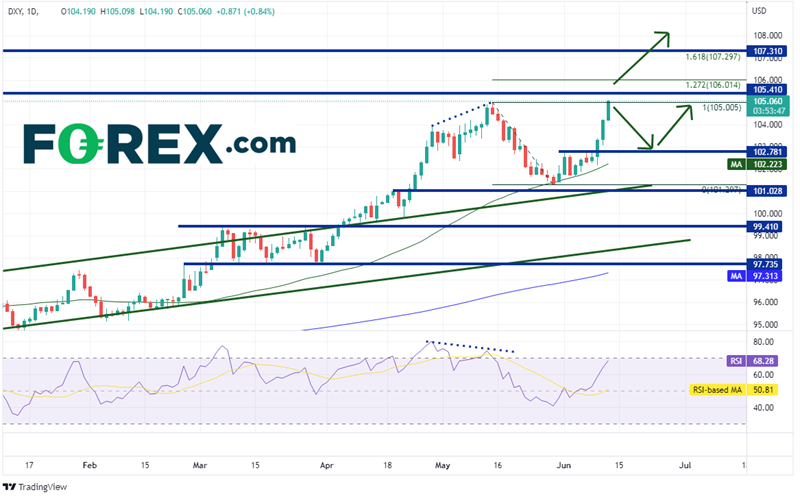 If the last couple of days have indeed just been a run up into the FOMC meeting, watch for the DXY to pull back to the first level support at 102.78.  Below there, price can fall to the 50 Day Moving Average at 102.22 and then the lows of May 30th at 101.29.  However, if the Committee hikes 75bps, or the language in the statement and press conference is hawkish, the DXY can continue to move higher. Horizontal resistance from September 2002 is 105.41.  Above there, price can move to the 127.2% Fibonacci extension from the highs of May 13th to the lows of May 30th, near 106.01.  The next level of resistance is a confluence from the highs from 2002 and the 161.8% Fibonacci extension from the recently mentioned timeframe, near 107.30.